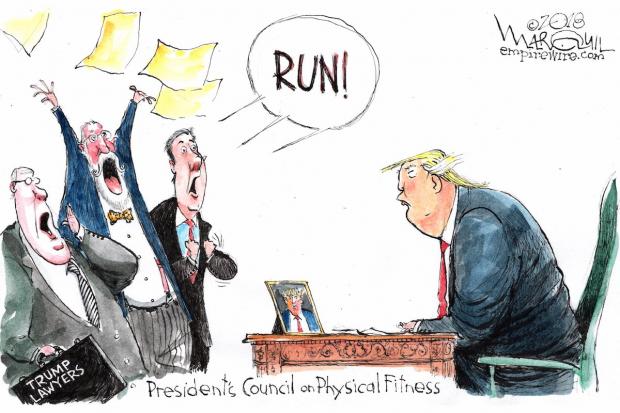 I never saw myself writing gossip columns. I never read them. They bore me. There are just too many interesting things going on in the world to give a damn or have any curiosity about the tedious superficial lives of rich, famous narcissists who are only famous because they’re rich.

I never in my life bought a copy of the New York Post or read a full page of the National Enquirer. Yet, the Trump family forced its way into my childhood.

When Trump entered my brain

“Trump” was an early entry in my geographic lexicon, following another one syllable word, “Bronx,” as in The Bronx. As I ended my toddler years, I thought Brooklyn’s Washington Cemetery, the densely tombstoned, 100-acre Jewish graveyard founded in the 1840s, was “The Bronx,” as I imagined a singular tombstone was a bronk, and hence many would be bronks. I apparently confused bronks with “Bronx,” a word I heard on the radio and TV, since I didn’t yet know how to read, write, or spell. After many failed attempts to convince me that the Washington Cemetery was not the famed Bronx of radio and TV lore, my parents took me to the actual Bronx, more specifically to the Bronx Zoo and a place called Freedomland, before I finally grasped the concept.

Having gained a proper understanding of cemeteries, tombstones, and The Bronx, I went on to wrap my mind around Trump. Like many New York children, “Trump” entered my early vocabulary as a place name; in my case it referred to Trump Village. This was the complex of seven 204-208-foot-tall sterile concrete slab apartment buildings. They looked to me like the bronks I saw in the Washington Cemetery, but much larger. And they represented a formidable barrier standing between me and Coney Island. They were built by “Old Man Trump,” a name coined for Donald Trump’s father Fred by his unhappy one-time tenant, Woody Guthrie.

For my developing Brain, “Trump” first represented a place, then, within a few years, the complex concept of landlord, and, a few years later, capitalism itself. As Old Man Trump’s son Donald came of age and started regularly making local news as a sort of genetically defective playboy, my understanding of the word “Trump” morphed to represent both Trump Village and the family’s man-child heir.

How Trump taught me sociology

In America, wealth alone can give you celebrity. Donald Trump never earned himself a place in American culture but was born into it. With his family’s real estate empire spanning Brooklyn and Queens, young Donald’s pubescent social antics were guaranteed to always make news, reaching well beyond the tabloids. For me, this presence was a simple early lesson in social inequality, flamboyantly laying to waste the myth of meritocracy as The Donald flaunted enduring wealth in the face of persistent incompetence and embarrassment. If you hail from money, you can fail at business again and again. You could avoid the Vietnam draft and most anything else other New Yorkers feared. The reality that this wealth flowed to the Trumps from the pockets of financially stressed tenants wasn’t lost on me. In junior high school I struggled with French but knocked it out of the park in social studies.

In 1973, the Nixon Justice Department busted the Trumps for racist tenant selection polices. In what we’ve come to understand as typical Trump fashion, the family denied the practice while promising to stop doing it. The inexplicable whiteness of Trump Village and other family properties presented an early lesson for me in structural racism. And it was the beginning of Donald Trump’s war with the Justice Department. At the time, I never could have envisioned the dystopian nightmare of Trump one day selecting the nation’s Attorney General, and the US Senate confirming his selection. That such an Attorney General would come to begin his tenure by eviscerating the Voting Rights Act, however, makes total sense.

Decades after the 1973 bust, I learned of a 1927 New York Times article reporting that Fred Trump, as a young man, was arrested in a Queens riot involving “1,000 Klansmen” at a pro-fascist demonstration in a “Free-for-all battle” with police. Donald went on to earn his own racist creds and begin his political life in 1989 when he took out a full-page New York Times ad calling for reinstating the death penalty and executing the “Central Park Five,” a group of black teens who, we later came to learn, were falsely accused of a heinous gang-rape of a white woman. Ten years after they were exonerated by DNA evidence and another person was found to have committed the crime, Trump was still oddly demanding that they were guilty, just like when he maintained that the nation’s first black president, despite ample evidence to the contrary, was somehow Kenyan.

The same year he called for the execution of the black teens, he opined on NBC News that it was blacks, not whites, who enjoyed a structural advantage in life, stating, “If I were starting off today, I would love to be a well-educated black, because I really believe they do have an actual advantage.”

For me, like many New Yorkers, Trump was embarrassing background chatter we tried to ignore—part TV character, part ugly reality—a billionaire Archie Bunker whose family’s deep pockets demanded we take him seriously. And as a rising racist demagogue, perhaps we needed to take his annoying presence more seriously.

From sadist to dopamine star

With the new century and the rise of the “reality TV” entertainment genre, Trump stumbled onto new footing, riding his boorish “you’re fired” sadism to a higher level of stardom. Some economically vulnerable Americans, like those being humiliated by Trump on TV, exhibited a sort of collective Stockholm syndrome and grew to form his core fanbase. But among his fellow New Yorkers, the people who grew up with him and knew him best, there was no love for their Donald, with voters in his home county of New York voting nine to one against him in the 2016 presidential race.

Having trained ourselves to ignore the Trumps, many of us didn’t stir when Donald Trump announced his presidential run in 2015 while going down, not up, on an escalator. Some of us tried to ignore him, but to much of the country he was dopamine, and to the media he was a cash-cow, bringing reality TV-sized audiences to the news cycle. By late 2015, Donald Trump started dominating online news aggregators. Ignoring Trump seemed impossible. But I still didn’t have to write about him. Besides, everyone else was already writing about him. Everyday. Everywhere.

When the Republican primary reached its season finale and everyone else was voted off the island, Republicans, after a nanosecond of hesitation, shamelessly abandoned their history and values, tripping over each other to get with the new program, whatever it might possibly wind up being. Thus began the new age of Trump. And it’s been impossible to ignore away.

By the start of 2018, “Trump Fatigue” and “Trump Fatigue Syndrome” had swept the nation, inflicting even members of Trump’s base. Everyone wanted the 2016 election to end. But because we let it happen, we seemed damned to live in its ceaseless purgatory. Trump, despite taking the White House, keeps running against Hillary Clinton while vandalizing our democratic institutions, seemingly just to troll the nation. Chaos theory worked. Keep the machinery of democracy overwhelmed on every front until we just can’t process the horrors fast enough. Attack the very notion of truth at every turn. Weaponize social media and go nuclear with data analytics. Raise the national stress level daily. Eventually we suffer Trump fatigue and tune out. And more Trump happens.

We’ve also become addicted to Trump. Not just his fans—all of us. To use a trite metaphor, we’re drawn to him like a train wreck. We can’t look away. There’s an addictive neurological response. We compulsively check the news. If you hate the man or are terrified by the fascistic authoritarianism he has come to represent and celebrate, you’re searching the news for clues that his regime’s collapse is imminent. And every day there are stories that indicate Trump is done. Sorry, I wrote one before the 2016 election. These stories stimulate dopamine production and excite the pleasure center of our brains. But Trump persists, even occasionally reversing his descending poll numbers, and we get the opposite response. Our brains trigger the release of Cortisol, the massively disruptive stress hormone. This unpredictable potpourri of pleasure and stress underlies the architecture of addiction.

It works the same way for Trump’s fans. Most see themselves as victims of a machine, and mistakenly see the corporatist Trump as the man who will destroy that machine. This is a culture war. Or a sporting match. Or just a fucking endless TV show that we’re all trapped within. Whatever. When Trump trolls the two thirds of the country that revile him, the one third that follows him luxuriate in the chaos and wash their brains with dopamine. The country is split into two opposing teams seeking opposing results but getting the same addictive brain responses. We’re all addicted to Trump. And like addicts, we eventually seek recovery. We get Trump Fatigue and want to opt out.

When I was a kid, barely two decades after World War Two, we’d ask our parents, “What did you do to fight the Nazis?” Most families had their own Nazi-fighting lore. I understood that without that fight, I wouldn’t have been there to ask the question. I later learned that if odds played out as they statistically should have, my dad’s four years in the 8th Air Force should have sealed his death, and you wouldn’t be reading this column today. But we came together as a nation, despite war fatigue that would be incomprehensible to most of us today, and we fought on. Hopefully future generations will have the freedom to ask their parents and grandparents what they were they doing when Trump happened.

When few of us speak out, we’re targets. When we all speak out, it’s democracy, and we might have a future. We can even do this together. You can be pro-gun, but Trump? Really? Is that you? You can be anti-abortion, but Trump? Is that really your idea of “pro-life?” Do you really want to gut clean air and water regulations? Do you really want to abandon your core values? Or is that the addiction talking?

We can come together and defeat our Trump fatigue and end this purgatory. But it will only work if we do it with love. If the polarizing hate consumes us, we’ve lost. We must fight for what we love and the world we want to live in rather than against what we think we hate. Hate is too intimate. I’d like to say I’m done writing about the Trumps, but of course, that luxury is not an option.