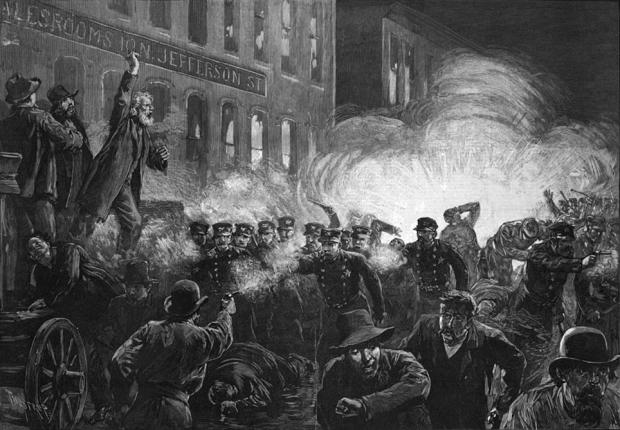 The celebration of May 1st as International Worker’s Day began after the events in Chicago on May 4, 1886. The movement for the improvement of the economic and political rights of working people was focused on the demand for the 8-hour workday. This struggle led to a mass demonstration of thousands in the section of Chicago’s Haymarket where livestock stockyards were concentrated. On May 1, 1886, a demonstration organized by the militant working class organizations of that era was attacked by agents of the employers. Bombs and bullets killed at least 8 people with many more being injured. As a result, the government arrested 8 leaders of the movement, tried them for murder and on November 11, 1887 executed four.

This shameful example of the suppression of the working class elicited an upsurge of reaction in this country and around the world. The May 1 holiday is a direct result of these events. The fight for the 8-hour workday did not end with the Haymarket incident nor did it end the organizing of what would become the modern industrial labor movement. Instead it energized the struggle for the economic rights of the working people.

The spokespeople on the right are fond of reminding us of the international scope of modern capitalism, modern production, modern transportation and modern finance. If capital is international in its nature, then why isn’t labor? The simple yet profound truth is that labor is international and has been since at least 1886.

Issues vary from country to country, but the essential economic contradictions in the world are based on the accumulation of wealth, who has it and how is it divided up. Our struggle in this country is no different than in Europe, Asia, Africa or South America. In fact, the similarities are becoming more apparent all the time. Rising income inequality, the fight for good jobs, the crisis in health care, education, workplace health and safety and the threat posed to humanity by climate change are being played out all over the world.

Local labor groups will rally in Niagara Square on May 1 at 12:00pm to celebrate this continuing struggle.
Richad Lipsitz is President President of WNYALF, AFL-CIO.