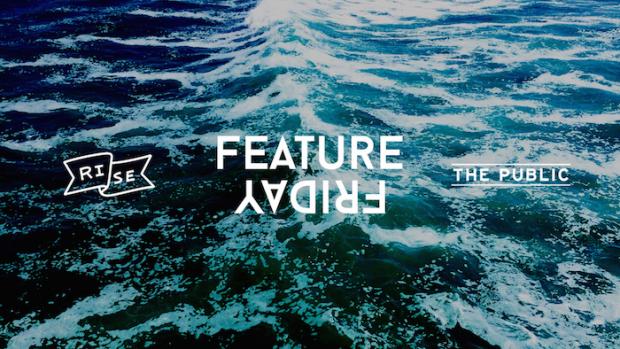 “My name is Clay, I moved to Buffalo from Texas in 2009. I’ve been interested in graphic design and photography since I was young but I’ve been without a camera until very recently when I finally got a smart phone. All my pictures are taken on an iPhone 5 and edited in Instagram. I ride my bicycle around looking for cool spots to shoot. I’m drawn to architecture and natural beauty. This shot was taken along the river walk near the South Grand Island Bridge. When I saw the geometry of the tower I knew the shot I wanted to get. It’s not as perfectly lined up as I’d have liked but it’s the best shot out of the batch. Looking forward to getting some more shots this summer, hope to see some fellow Instagrammers out there, look for the shaggy haired dude on the black and blue bike.”

“Hey @risecollaborative thanks, this A-frame is actually not a bike rack although we do have a custom rack that isn’t pictured. That bike is locked up to a parking meter but it’s between a chalkboard our lovely server Sarah Campbell (@sitbuffalo) is drawing on, highlight our new menu—just out Monday actually.”

It’s Friday!!! Come on in! Relax, kick back, enjoy some lovely music by Sam Marabella Band (6:30-8:30) and get a healthy delicious meal. It’s cozy in here ) #tgif #sammarabellaband #livemusic #foggyfriday

“I’ve lived in Buffalo for the past five years now, and it has grown on me tremendously, specifically in the past two years. There is such an engaged and passionate culture for the area that I have a great appreciation for. This shot was taken of the M&T Plaza building on Main Street, one of my favorite buildings from the city skyline. It’s organized and mathematical mid-century modern design instantly drew me to it. I’ve seen it from above so many times before from City Hall, but this time decided to look at it from a different approach while meandering Main Street. I use an iPhone 6 Plus, VSCO Cam & SKRWT.”

“I was raised in Buffalo and left when I was 23, moved to France and then New York City. My boyfriend (native New Yorker) and I are actually moving back to Buffalo in the fall. That photo is of the enormous Pepsi Cola sign on the waterfront in Long Island City, Queens. It originally stood a couple hundred feet away but was recently moved closer to the water as part of the development of the park on that waterfront. The whole area is being redeveloped, in this case, less gentrification of the people themselves and more of the industrial area it used to be. Overwhelmingly large buildings like the one in the background are being built on every block in that area, creating huge contrast with the original brick and mortar buildings of the neighborhood. It gives the whole neighborhood a weird and uncomfortable futuristic feeling. The new park though is beautiful and the redevelopment is bringing a lot of business and younger people to that area that otherwise wouldn’t think twice about it. The good and the bad of gentrification.”