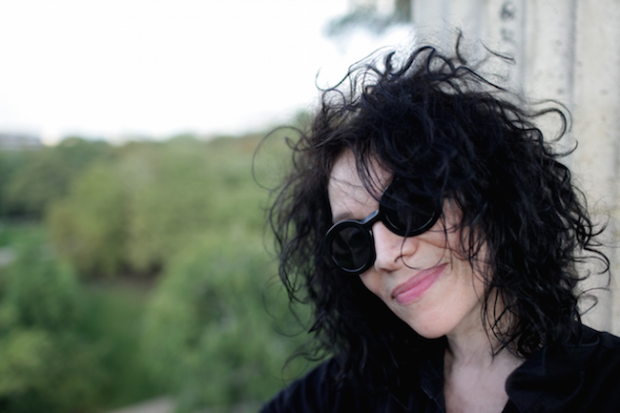 With the help of copious amounts of coffee, experimental filmmaker and sound manipulator Kasumi pored through hundreds of public domain videos—obscure movies, educational films—to string together the approximately 25,000 images that comprise her full-length film, Shockwaves. During the creation of Shockwaves, the artist would often study an entire film just to yield a single useable one or two second clip. What she was searching for were what she calls ”universal gestures”—motions, glances, facial expressions—that when strung together became a language of their own. This Wednesday, April 29 Kasumi will make a special presentation of Shockwaves at Squeaky Wheel, followed by an improvised live cinema and sound performance the next day with her friend Adrian Bertolone, a.k.a. Ay Fast, as part of Squeaky Wheel’s SOS Sound Series. We spoke with the Cleveland-based artist about her experience cutting together her hypnotizing, unrelenting film.

SHOCKWAVES — Trailer from kasumi on Vimeo.

Tell me about Shockwaves.
It is really an amalgam of a lot of different artforms I’ve worked in; music, art, painting, writing, film, video, dance. What my work is, what I’m trying to accomplish is to kind of depict how our brains work, how we remember stuff. Not necessarily what happens—like your average Hollywood movie is a depiction of action—but kind of like the stream of consciousness in Ulysses or even Finnegans Wake. I’m attempting to depict what our brains are doing when remembering. In other words, it’s a depiction of our subconscious minds. Shockwaves is really a story of abuse and revenge, but I’m telling it through stream of consciousness.

Because our brains are constantly being stimulated and reacting to sensations and events and feelings and emotions with a constant flux of input, what our subconscious minds do is, instead of illuminating all that stuff with a floodlight, we use a flashlight and try to find events that maybe have some similarity to what happened previously so that we can apply that to the present and the future. In other words you’re narrating your own life. When you look back on it, it kind of makes linear sense, because that’s the only thing you’ve got, so that’s what I’m doing with my film: I’m using thousands and thousands of images—some public domain, some my own footage—to portray all of the thoughts and actions and feelings and subconscious goings on of my characters in the form of tiny gestures.

What did you learn about your own consciousness or your own way of thinking while making this film?
Well first of all, how complex the brain is. Secondly: boy, do I have a lot of things to work through. It was like a four year psychoanalysis. I thought of things that I realized when I was making it—I didn’t have this intention going into it, but when I was deeply deeply into, after like the third year, I realized oh my god, this is autobiographical. I also learned a lot about my capabilities as an artist. I can push it, if I want. If I can go on for four years—18 hour days for four years. I mean I started dreaming this stuff.

I’d imagine that it would be easy to lose track or lose yourself in it because it’s such a hypnotizing film. How did you stay focused?
I had outlines, I had a narrative structure to it. That’s a good question, though. In a way, it’s as much a musical piece as it is a film. I was using these tiny samples from public domain movies and sometimes they provided some narration or dialogue, like in the trailer, there are words, but there was also a music track, so I had to figure out a way to glue those pieces into—compose them into—a bigger composition. I used them as musical phrases and notes in a bigger composition, so I was always focused. I couldn’t afford to lose focus or I’d just forget what was going on. I had a plan and it was like rolling down a mountain without breaks for four years. I had to just keep going and I couldn’t take my eye off of what was in front of me, or else I might just crash into it.

Where did the music in the film come from?
The music is an amalgam of bits and pieces of sounds from these public domain movies, snippets of music that composers made for it, and my own music. There is a lot of folly; there are a lot of atmospheric sounds that pull all of these elements together.

A screencap from Shockwaves.

Why did you decide to recycle public domain footage for this film?
The reason that I used public domain movies for this, and specifically for the most part unrecognizable stuff—very obscure educational and training films and stuff—was I needed a way to depict the emotions and thoughts of my characters. How much of what we’re remembering and thinking really belongs to us? Is it from our parents, is it from society, is it from media? I thought a really great way to do this was to portray their thoughts as collected from outside of themselves. These little tiny snippets of image and sound become like a language that I then use to build a new story or structure.

I can’t imagine what it could have been like poring through all of that footage.
It was brutal. I would watch an entire movie and find one second of usable material. So I watched a lot of bad movies.

What were you looking for?
What I was looking for were kind of universal gestures: A gesture that will mean the same thing to anyone watching. As I said, I use these gestures and piece them together as a sentence or phrase of music to make some kind coherent thought. When you juxtapose those images together they create meaning; they can be applied to something else.

Walk me through a typical editing session.
An editing session is different from the whole project from start to finish. The whole project goes in phases. An editing session would consist of like, today I’m going to tackle this one minute section, and then that goes on for three days [laughs]. We were talking about focus: It feels as though you’re unfocused when you get lost on a tangent, but the movie is about tangents, these non-linear thought processes and the associations you make.

Is your process of editing anything like your live sound performance? What is the relationship between the process of creating this film and your live sound performance?
The similarity is that I’m using a lot of the same material, these tiny little cut-out clips that I load into software. I’m playing with Adrian Bertolone live and we haven’t played together for six years or some crazy number of years, so I don’t really know what he’s going to do, and he doesn’t know what I’m going to do, so it’s going to be kind of impromptu, though we’ll talk about it beforehand. I have to plan more in advance the live show so I know where I’m going to go, but I have to be open to improvisation.