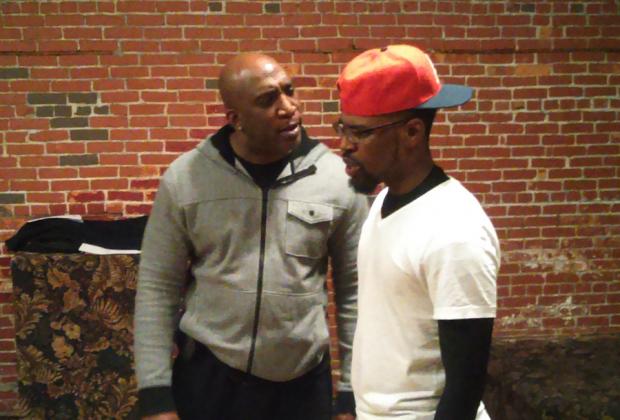 In Buffalo’s rich theater community, it is easy to find an entertaining play to spark your interest for the evening. The difficulty occurs when trying to find a play dealing with a serious subject matter that you can relate to. Alemaedae (pronounced “Al-lee-ma-day”) Theater Company welcomes the challenge to hold the attention of their audience members with a real subject matter faced by many of our inner city youth. The touching play F. B. E. (Family Before Everything), is written by Phil Davis Sr & Taura “Chyna” Stephens, and directed by Willie Judson. “F.B.E.” tells the story of a family headed by a single mother with an ambitious son forced to become the “man of the house” before he reaches manhood.

There are two sides to F.B.E. On one side there is the young man, Julian, attempting to help provide for his family the only way he knows how, while still protecting his mother’s heart by not revealing to her where the help is coming from. On the other hand, there is the streetwise hustler, Bolo, whose love for what he believes to be his family, is more important than any promise. The one thread connecting the two is Gloria, the widowed God fearing single mother, that also has skeletons in her closet that once revealed will ultimately cost her just that, her family.

The Public recently sat down with Phil Davis, writer and producer of this provocative play to discuss his opinion of some of these heart-felt issues in the inner city:

PJ: How do you feel this story connects with others in the African American community?

Many people in the African American community know that this play is very close to our reality. Most of us know at least someone who has fallen victim to the streets or have been jailed for being involved in a crime. Gang violence has been around for years. It was glamorized in the 1940’s and 50s with the gangsters like Al Capone but recently it has been adopted and put heavily into Hip-Hop music, causing a lot of people who don’t know it’s history to think it’s a “black thing.” This story brings to light the pressures that young people in impoverished neighborhoods face on a daily basis; which is to do whatever you have to do in order to provide for your family. If you were raised in a jungle you’ll do what it takes to survive in the jungle. This play touches on all those issues and more.

PJ: How do you feel that some of the real life issues dealt with in this play can be solved in our community?

In order for the real life issues dealt with in the play to be solved in our community we will have to unite as a community. When I read or watch anything about how African Americans united in the Civil Rights movement, I see how this generation has severely dropped the ball. We used to support each other, educate each other, love each other because we “had to.” It was our only way to survive. We were a community. It is very seldom to find that same determination in our neighborhoods today. Our children have been exposed to utter failure at schools, as well as in their households. They are raised around sex, drugs and violence, so it is no surprise that a lot of our children gravitate towards that. There was a time when our youth would never disrespect any adults, now some of their parents encourage it. Until we as a whole begin to make a change, these issues will get worse before they get better.

PJ: What type of feelings/messages do you hope audiences will take away after seeing this show?

I hope that the audience will take away from this show, the mindset to do something to better in their community. We need to guide our inner city youth, by taking an active role in mentorship. We need to get the youth involved in different clubs and organizations that give them positive outlets and expose them to positive role models. Our audiences will hopefully spread the importance of education and career building to our youth. As long as one audience member is effected by our show and decides to change their mindset for the better, then we have succeeded on stage.