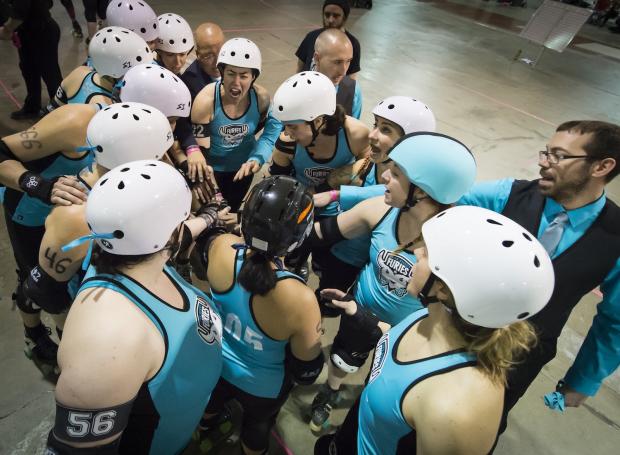 Buffalo’s Lake Effect Furies last took on the Ithaca SufferJets in sanctioned play on May 10, 2014. Since then the team has changed venues, from the Rainbow Rink in Tonawanda to Riverworks, and they have also had their first Division 1 playoff appearance. When they met last the Furies were ranked 50th in the Women’s Flat Track Derby Association and Ithaca was 79th. Taking two different paths to get to this point, Ithaca enters Saturday night’s bout ranked 76th while the Furies currently sit in 33rd.

Since that last bout Ithaca has flirted with the Division 2 playoff cut off of 60th, staying in between a rank of 68 to 87th. Only two New York state teams have ever made playoffs in the current setup —five-time WFTDA Champs Gotham Girls Roller Derby (New York City) and Buffalo’s Furies —but, Rochester (Roc City) and Ithaca have come oh so close. Ithaca is currently four spots up on Rochester and sit as the third highest ranked team in New York State. However, they don’t seem much closer to their goal of playoffs.

Three jams into their opening 2016 season game against Brandywine one of their main jammers Haha Hatchet went down with an injury. Even with her in the lineup, the SufferJets would struggle with depth, without her they are scrambling. Since that injury the SufferJets have tested out five jammers, but just two of them, Nora Morse and Rainbow Might, have combined for 86 percent of their total points scored.

When they travel down the I-90 this weekend, Ithaca will be reduced further down to 12 skaters with a roster that will include call-ups from their B-team, the Bluestockings in Machete and Meatballs and Riptide. Machete has had some success jamming this year with the Bluestockings and they may look to her to help shore up this jammer rotation. This is a lot to ask of a call up against the Furies defense though.

It’s not just the jammer rotation that is thin either, the SufferJets have been relying heavily on just five blockers: Chrysteria, Bunny Leboutski, Manda Tori Chaos, Akt 47 and Gorges Curves. Those five eat up lots of track time, seeing between 56 and 74 percent of the jams the SufferJets have played so far this season.

Their roster turnover is also significant, losing eight skaters from last year to the Furies one, so continuity will most likely also be an issue.

If the SufferJets start to question themselves as they make that drive they should remember that at this point in their season they have a lot less to lose than the Furies. Sitting outside of the playoffs, and on the verge of being forced to accept another development year, it is the Furies who should shoulder most the pressure for this game. The Furies have to not only win this game, they have to win it big.

Ithaca rolls into Buffalo with a weight of just 1.72. In order for the Furies to match their current average WFTDA score of 370 they need 72 percent of the total points that get scored in this bout. If they want to gain on their average they will need to push that even higher and the maximum they can score is only 516 (they have averaged 520 this calendar year). In contrast, Ithaca’s average is 232 and anything over 28 percent of total points will net them a score above their average. Ithaca can make mistakes in this game, they are expected to make a lot, but the Furies really can’t.

When it comes to mistakes the Furies know what they need to work on. Through three sanctioned bouts this season they have had 219 points scored against them and 128 of those have been scored on powerjams they have given up. The Furies jammers have to play this game with focus and patience — especially when they are on powerjams and/or when they have lead jam established. Point denial needs to be the focus and given that this is the scenario where they have given up 58% of the points scored against them this season, this needs to be the main focus.

Beyond that, Furies blockers need to be prepared to recognize star passes and punish Ithaca’s pivots for accepting them by swallowing and holding them. Through two bouts this season Ithaca’s jammers have looked to star pass 14 times (8 Ohio, 6 Brandywine) with rotation jammers breaking that down Jagger 6, Rainbow Might 5 and Nora Morse 1.

Ithaca’s jammer rotation will throw different looks at the Furies; Nora Morse is small, strong and low while Jagger and Rainbow are taller, and Rainbow has size to push. Rainbow Might has transferred back to Ithaca after spending some time in the Gotham home leagues and looks solid. Between the diverse looks they will give the Furies blockers, and the unknown element of a skater like Machete, the Furies blockers will have to adjust to match these different styles.

In both of their games this year Ithaca has struggled in the 2nd half, a sure sign of their lack of depth and struggles with endurance. The Furies need to shut them out of a strong start and wear them down early. No mercy.

Fans are already showing their excitement for Saturday’s game with the Furies nearing their fourth straight pre game sell out of VIP tables and front row seats to start the 2016 season. Tables are already gone and only a couple dozen front row seats remain (don’t panic there is lots of general admission tickets left!) The doors and the box office open for the bout at 6pm on Saturday with first whistle at 7pm. Fans can pre order tickets online or get them at the door.