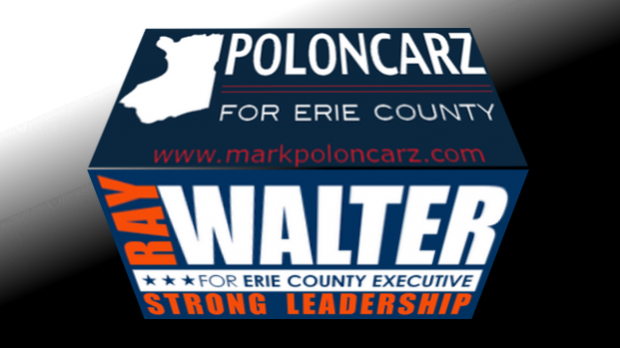 We thought that Ray Walter taking on Mark Poloncarz would be fun, right? They’re each of them snarky, smart, partisan, and combative. But it’s already become supremely annoying.

Nothing substantive has been debated or discussed yet, and I doubt anything ever will be. Walter can hit Poloncarz on issues at DSS, and Poloncarz can hit Walter for a lack of accomplishments as a minority member of the legislatures he’s been elected to, and they’ll each try to string that out as much as possible. In the end, though, Poloncarz’s tenure has been deliberative, fiscally responsible, intelligent, inclusive, and — above all — looking to the future rather than skulking about the past.

Not to say Ray Walter would make a bad County Executive — just that Poloncarz hasn’t committed any act or omission that would adversely affect his overwhelming re-election.

What’s annoying about it is this: rapid campaign response is important; I get it. You can’t simply let some lie or nonsense stand, hoping it will just go away.

But did we really need a biting rapid response to each candidate’s campaign kickoff? In terms of setting the tone, it doesn’t bode well.

With Poloncarz’s kickoff, Walter pounced. The County has experienced some very good years lately, so Walter’s third sentence, “Myself, who understands the reality and challenges facing Erie County, its taxpayers and its businesses; and the incumbent who ignores reality and twists numbers for political gain”, is as eye-rollingly overaggressive as it is awkwardly worded. Furthermore, Walter is making an issue of horrible road conditions literally a month after one of the coldest and snowiest winters in WNY history. He is right that the DPW was unable to click its collective heels to fix all the roads instantly.

Likewise, when Walter held his campaign kickoff, during which he had to assail Poloncarz because Walter has little name recognition outside of Amherst, and because Poloncarz is running on a strong record, the Poloncarz camp sent this:

ERIE COUNTY, NY – Today, as a Republican announced his candidacy for Erie County Executive, many exaggerations and untruths were stated in an attempt to misrepresent and distort Erie County Executive Mark Poloncarz’s proven record of job growth, fiscal discipline and strong leadership for the people of Erie County.

Not as aggressive as Walter’s, but also completely unnecessary.

Mark Poloncarz is proud to run on his record of accomplishments from the past four years, and is looking forward to a fact-based, spirited campaign that leaves aside petty political attacks while focusing on the issues that matter most to the people of Erie County.Poloncarz will detail his accomplishments, the issues that matter to the people of Erie County and his goals for the future when he announces his candidacy for reelection on Tuesday, April 21, 2015.

Then ignore the taunting. We all want a spirited, fact-based campaign, so if your opponent is making stuff up, deal with it with rebuttal, not simply by making the accusation.

This campaign has only just begun, and it’s already cringeworthy. Sometimes I wish political campaigns would tell it like it is, and that every ad was replete with profanity. At least then, this sort of hypersensitive overreaction would be fun.

We’re about 3 days in, and I’m already getting the sense that if one said the sky was blue, the other would blast the media with a press release heavy on insults, light on facts, insisting that the sky was red and anyone suggesting any differently was just repeating right-wing Koch Brothers / left-wing Soros talking points.