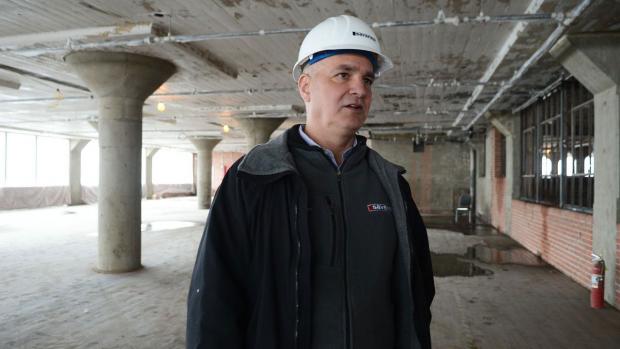 Carts full of concrete rattled through the cavernous bottom floor of a vacant warehouse building in South Buffalo and out to a dumpster earlier this month, as about 90 workers chipped away at a rehabilitation project, with the first tenants set to move in this summer.

The project, called Five Hundred Seneca, will see a 300,000-square-foot former industrial complex—which has been vacant off and on for long periods of time since 1958—converted into a business and residential space in the heart of a once-bustling manufacturing corridor. Dust-covered cherry and pine floors, with pools of water dotting the expansive soon-to-be offices, will be varnished and glimmering.

The Savarino Companies project, like many in Western New York, will benefit from brownfield tax credits—more than $6 million on the $38 million project—as part of a state program that gives breaks to developers who clean up and build on contaminated sites. The program was set to expire at the end of the year, but was extended by a decade as part of the state budget negotiations.

Sam Savarino, the president and CEO of Savarino Companies, said he would have never pursued the ambitious redevelopment project if the brownfield credits—and historic preservation tax credits his company will also receive for the rehab—were not available.

“The economics on this project just don’t work otherwise,” Savarino said. “On a lot of projects that’s the case.”

To get the credits, the company had to pay for the remediation of a loading dock area that had been contaminated with solvents at some point in the 114-year-old building’s history.

Savarino Companies has also been granted brownfield credits on an apartment complex it is building along the Buffalo River about a mile from the Five Hundred Seneca project.

During that time, the state has given out over $1 billion in tax credits—$128 million in cleanup credits and $970 million in redevelopment credits, according to the state agency’s records.

Savarino said that with so much contamination in Western New York and the lack of a high-stakes real estate market like New York City, most of the sites being developed under the program would have likely sat vacant, keeping surrounding property values depressed and remaining an environmental hazard for those living nearby.

“There is no positive incentive for people to clean them up,” Savarino said. “It’s not going to happen on their own.”

When the program was extended, Western New York legislators in both parties and in both houses praised the compromise, which set up stricter requirements for developers in New York City, but left the tax credits largely the same for the rest of the state.

Downstate legislators and advocates have long complained that developers were taking advantage of the program, receiving credits on upscale apartment buildings and hotels that required little remediation and would have gone forward without the breaks.

But not everyone is happy with the extension. The day after the deal was struck, Peter Iwanowicz, the executive director of Environmental Advocates of New York, released a statement saying that while the reforms instituted in New York City were a step in the right direction, they should have been applied across the state.

Arthur Giacalone, an attorney from East Aurora who has long taken up environmental and tax issues, has similar concerns.

He said that while some projects in Western New York are deserving of the tax breaks and stick to the program’s goal of incentivizing development on parcels with significant contamination, other high-profile projects—like Kim and Terry Pegula’s HarborCenter or Delaware North Companies’ new headquarters—required minimal remediation, are in a downtown area that saw little industrial activity and would have moved forward without the credits.

“The brownfield credits have been used appropriately for heavily contaminated sites,” Giacalone said. “But the abuses, if they’re happening downstate, our developers are just as likely to abuse them as anyone else if given the opportunity.”

Giacalone said the program has been described by developers and politicians as an essential economic development tool that needs to remain as it is in upstate to be effective, but the reality is, developers didn’t want the rules to change because they would lose access to the lucrative credits.

“From my perspective, the brownfield tax credits appear to be just another source of corporate welfare being billed out for the well-connected developers,” Giacalone said.

Assemblyman Michael Kearns, a Buffalo Democrat, was one of the lawmakers who were ecstatic that Gov. Andrew Cuomo and the Legislature came to terms and kept the program in place for another 10 years.

Kearns, whose district includes scores of polluted parcels in once-major industrial and manufacturing corridors, said he has seen many properties returned to the tax rolls, some with manufacturing jobs attached, since the program started.

“If a couple of developers can really use private money and we have a public-private partnership, I think it benefits a lot of people,” Kearns said. “It’s putting people to work, which I think is an important thing.”

Kearns said the projects create jobs during construction and turn buildings and lots that are burdens on the neighborhood into places the community can benefit from and be proud of.

Kearns defended the compromise, saying New York City can afford to lose projects that don’t qualify because someone else will inevitably come by to develop the land. But in Buffalo and the rest of upstate, the new rules applied to the Big Apple would have been too “rigid,” he said, killing many projects before they even got started.

Kearns said he would be open to making further changes to the program if it were to cut down on abuses in projects that would go forward without the breaks, though he doesn’t believe many of the Buffalo projects fall into that category. But he said the important thing for him is making sure the tax credit does not expire.

“We can work out the kinks of the program,” Kearns said.

Back at Five Hundred Seneca, Sam Savarino spoke excitedly about the large courtyard planned in the center of the building: Windows from offices on three floors will look down into the airy space. It will be a common area with a café and bistro.

The developer was part of a team assembled by the Buffalo Niagara Partnership, a major business advocacy group in the region, that traveled to Albany to give input on the brownfield program reforms.

Savarino said the program is largely used well in the Buffalo area, though his group did suggest some reforms that will be applied across the state as part of the extension deal.

“For us, I think, in Western New York, some common-sense changes to the program to prevent abuse, they really weren’t going to affect the projects here, so there really wasn’t a lot of opposition to that,” he said.

Applying for the tax credits is a time-consuming and labor-intensive process that often slows progress on projects. “If you don’t have a good amount of time it’s not worth the effort to get into it,” Savarino said.

For Five Hundred Seneca, that time and effort was worth it, Savarino said, because it would never have happened otherwise. That’s why a long-term extension of the program was important.

Savarino said in New York City a developer might do $200,000 worth of remediation on a $2 million site and build a $1 billion building on top, with the credits applied to the entire project.

“That’s not the situation in Western New York,” Savarino said. “The economy is different. The property values are much reduced. We have a great stock of old industrial buildings that aren’t otherwise going to be reused.”

Justin Sondel is a staff reporter for City & State, with which The Public partners on state and local news coverage.