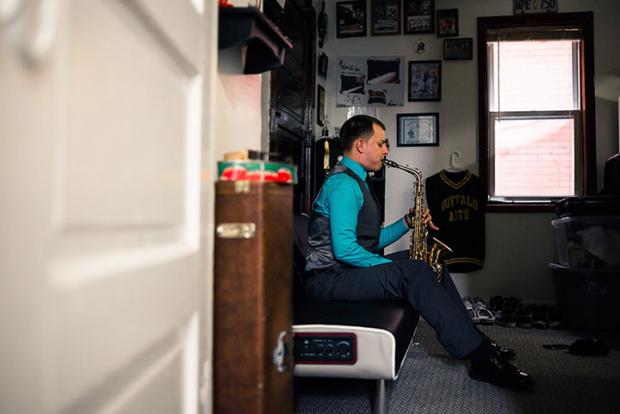 Alex Spencer and his saxophone in his Black Rock apartment. Photo by Shawna Stanley.
by
Aaron Lowinger
/ Apr. 21, 2015 8pm EST

In his junior year of high school, Alex Spencer hit rock bottom. He was effectively homeless and Erie County officials demanded that he leave his seat in the band room at Buffalo’s Academy for the Visual and Performing Arts and enroll in school in Lackawanna, where his mother was then living.

Living again with his mother, who struggled with alcohol and drug abuse, didn’t help. She couldn’t find work and she jumped from relationship to relationship, moving herself and Alex into whatever situation would have them.

His mother had left him unexpectedly between the ages of 12 and 14, and Alex had a hard time staying with her for longer than a couple of days. The closest thing Alex had to a father was the father of his three younger siblings. He moved to the suburbs after the marriage failed and their contact waned.

So the high school band major rode the bus. “I stayed in at least three different places. Lackawanna, South Buffalo, my cousin’s in Riverside. Pretty much anywhere,” he says.

“I had to get to Lackawanna, so if I wasn’t staying at Lackawanna it was pretty far. Their school starts a little bit earlier, so I had to go all the way from Buffalo to Lackawanna. I had to take a bus to take another school bus. And it wasn’t like Performing Arts where I did everything and it was okay; you did more than one thing and you were looked at. I came in and played football, so going from my other school to somewhere you don’t know anybody and playing on the varsity football team, they were like, ‘Who’s this kid, who does he think he is?’”

In November of that year, Alex got into a fight with his mother during which she destroyed many of his most treasured personal belongings: honor roll documents, trophies, and accolades of his success at Performing Arts and in sports leagues. He left her home for good.

Just like Alex’s future a few short years ago, the future of the Buffalo Public Schools instrumental music program is cloudy.

Of all the elective programs in the city’s schools, instrumental music has been hit the hardest. During the 2012 school year, the program had 20 full-time teachers spread among the district’s 56 schools. According to the district’s budget posted on its website (page 41 of 70), this year the number is at 13.74 full-time positions and slated drop to 9.86 next year, when the supplemental and temporary funding the program has received from Mayor Byron Brown for the past two years expires. A Contract for Excellence grant boosts that number to 24.16 for the current year.

Of those 24.16 positions, 14.1 of them are in high schools, leaving ten teachers scattered throughout the district floating between buildings, in some cases to teach one class per six-day cycle.

Amy Steiner works in three different buildings to provide instrumental music instruction for 40 minutes once a cycle. “I can’t get anything going, and I’m a good teacher,” says Steiner, who was honored by Business First in 2010. “They are literally wasting money.”

It’s not an accident that the district’s strongest music programs are in its strongest academic schools. In recent years, Buffalo moved to school-based budgeting, a system that allows individual principals to decide a portion of their budget in-house. A principal of a school in the state’s political crosshairs, with an eye on test scores, is pressured to use that budget to hire extra support for English Language Arts, Math, and English Language Learners programs.

Teachers like Amy Steiner and students like Alex Spencer argue that for some students, music makes all the difference between graduating and dropping out.

The program has been gutted in recent years. “I have kids who do not go to school now,” Steiner says. “I had a girl who was going to audition as band director and be the first person in her family to go to college. She has not picked up her flute since June of last year. She hardly even goes to school now.”

Timothy Lyon, a teacher who instructed Alex at Performing Arts, agrees. “There are a number of kids, I believe Alex would have been one, if he didn’t have the opportunity to play in music, they wouldn’t have finished.”

Alex’s family lived in Rhode Island until sixth grade, when they relocated to Buffalo. By third grade, Alex’s behavior at school had begun to slip. He got into fights and was suspended often. At home he witnessed fighting between his mother and stepfather that often erupted into full-blown physical confrontations.

His mother bought him his first alto sax while they were still in Rhode Island. He taught himself the basics using books and joined a band program at a school. His behavior stabilized. “However you’re feeling affects what you play,” Alex says. “If I’m feeling good I might do something that’s upbeat and sounds nice. If I’m sad, maybe jazz music. I enjoy playing jazz music regardless. It just makes you feel better.”

When they relocated to Buffalo, his mother brought him to Performing Arts on the first day of sixth grade and requested an audition. Lyon was one of the teachers who sat in on that audition.

Alex found a home in the program and thrived. An instrumental music major in high school, he played in the school band, the marching band, and jazz ensemble.

“I could go to school just a few days a week and still get good grades, but since I was in music classes every day, I went. That’s the main reason I went to school. I got to do something I liked every day.”

Band music belongs to the community with which you play and share it. “It relaxed me but it wasn’t just the music,” Alex says. “It was Mr. Lyon. He knew I didn’t really have a dad and he was kind of that father figure. He looked after me, let me just come in and play when I needed to.”

“The unique thing with our school is we have them for so long that it becomes kind of a family,” Lyon says. “I think that’s a draw for some kids. It’s a sense of normalcy…They don’t know where they’re staying or with whom or what things are going to be like when they get home. This is the constant, stable thing in their lives.”

When Alex was floundering at Lackawanna High School, Lyon and other teachers from Performing Arts  kept in touch with him and helped him return to Performing Arts for his senior year as an unaccompanied minor under the McKinney-Vento Act.

Alex found a part-time job and an apartment and forged ahead. Today, he lives in Black Rock within walking distance of Buffalo State College, where he is a sophomore majoring in criminal justice and social work. His walls are lined with his surviving trophies, certificates, medals, and other accolades he’s accrued over the years.

He’s enrolled in the Army National Guard as an infantryman and plays “Taps” on his bugle at local military funerals. He also works 30 hours a week at Radio Shack and serves as a “Big Brother” to a 12-year-old Buffalo boy. “It feels good,” Alex says. “We’re a good match. We both like sports and music.”

“He’s a great kid,” Lyon says of Alex. “He had every reason to say, ‘Forget about this, I’m not doing it.’ Not just school, but life. He could have followed in the footsteps of role models that weren’t very positive, and he chose not to. He’s doing everything he can to make a better life for himself and I’m proud.”

Advocates for Buffalo’s music program have more to point to than anecdotal evidence of success. For the past two years Amy Steiner has been polling her colleagues and tracking attendance and graduation rates for high school students involved in the city’s music program. She claims that such students have stellar attendance and a 100 percent graduation rate. Last year, all 137 seniors in a music major program graduated.

Steiner has caught the ears of school board members, particularly those of a majority that places a lot of stock in test scores. Members James Sampson, Larry Quinn, and especially Patti Pierce have been vocal in their support of restoring the program.

“As a new board member, the two biggest areas of concern are attendance and graduation rates. Anything that can promote both of those agendas is worth funding, promoting, supporting,” Pierce says.

With Buffalo Public Schools facing a $10 million deficit next year, however, adding funding to any program might be a heavy lift. Quinn understands the importance of the instrumental music program but sees a quagmire. “It’s about more than just money, it’s about classroom time,” he says. “So it’s not just a budget issue.” Quinn believes that budget constraints and contractual issues with the teachers should be negotiated at the same time to reach a package deal.

Quinn also says that other programs have made similarly convincing arguments for expansion, naming physical education, art, and social studies.

An idea that has been penciled in for the future is remaking the beleaguered Martin Luther King school into a annex to Performing Arts, beginning as early as September 2016.

As it currently stands, most of the city’s scant instrumental music programs are concentrated in the upper grades, and students are now aging into those grades without any prior musical background. Now in his 15th year in Buffalo Public Schools, Lyon has seen the results of that lack. “We don’t have the programs for kids starting out, so we’re not getting the auditions for students to come to our school,” he says.

With the establishment of the Performing Arts annex still undefined, advocates of the program have adopted a wait-and-see philosophy. Lyon is skeptical. “They shouldn’t just have one or two schools that have art programs and the rest don’t,” he says. “This is something that every school should have. You go into suburban districts and this is something they all have. We’re not going to attract more people to move into the city—younger people with families. They’re not going to want to send their kids to schools with no art programs. They’ll move out to those schools that have those programs.”