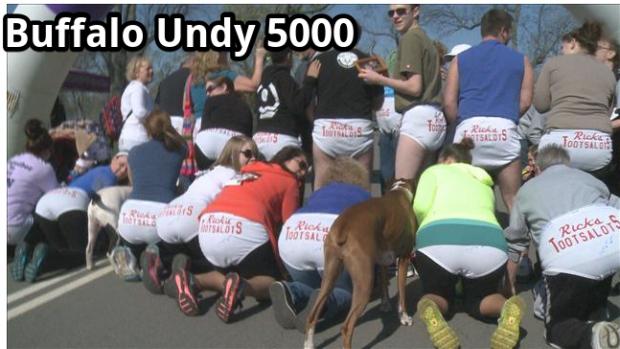 The 2015 Undy 5000 in support of the Colon Cancer Alliance is being held in Buffalo’s Delaware Park this Saturday, on April 25th. It remains - astonishingly enough — the only Undy 5000 being held in New York State, and people are coming from throughout the region to participate in a fun event designed to raise money for — and awareness of — a particularly deadly but especially preventable cancer that has an unfortunate stigma.

For those of you squeamish about getting a perfectly painless colonoscopy, you now have a new FDA-approved, non-invasive screening method.

To that end, this is a bleg for support as my family will be participating in the Undy run, and we’re hoping that you’ll help us to raise $1,500 (or more) for the CCA and its mission to help colon cancer patients, provide free screenings, and raise awareness. I seldom write about my personal life, and when I do I keep it as vague and general as possible. You’ll forgive me for making an exception today, but it has to do not with me, but with all of you.

Back in October 2012, my wife’s gynecologist Dr. Judith Ortman-Nabi advised her to undergo a colonoscopy due to a significant family history of colon cancer. Usually, people aren’t prescribed colonoscopies until the age of 50, which we haven’t yet reached.

She went to the endoscopy center on Maple near Millersport. It wasn’t an uncomfortable procedure, but the sedation knocks you out for a day. Bad news – they found a polyp; devastating news – it was cancerous. That commenced a particularly scary and difficult time. We had to find an oncologist. We had to find a surgeon.

My wife returned to the endoscopy clinic, where they tattooed the area so a future surgeon would know from where the polyp had been removed. The area “looked clean” but we didn’t want to take the chance that it hadn’t all been caught. We were exceedingly lucky to discover Dr. Timothy Adams, a talented, young, and friendly surgeon who performs laparoscopically-assisted colon resection surgeries.

In November 2012, my wife underwent a successful resection surgery and we were overjoyed to find out that the section removed contained no cancer, and the bundle of lymph nodes that were removed along with it showed that the cancer had not spread. We had found it early – had we waited another year or until we were 50, the result likely would  have been tragically different.

That diagnosis leads to a lifetime of follow-ups; bloodwork, testing for markers which may indicate a recurrence of cancer. Catching this early was the difference between a full and curative recovery, and something far worse. So, my wife wants to help make sure others have as fortunate a result as she, and she is raising money for colon cancer research via this page, and if I’ve ever made you think, laugh, or angry via this blog, I humbly ask you to donate whatever you can – however small.

Your donation is 100% tax deductible. If you don’t or can’t, I understand, but I urge you to take colon cancer seriously. If caught early, it could be the difference between life and death. Here’s where the money that’s raised will go – to advocate, to promote and to expand access to screening, to educate, and for cancer research. The Undy is intended to be a humorous way to deal with a sensitive subject, so lots of participants run in their undies.

Every day is a gift, and we’re very aware of how different all of this could have turned out, but for an unusual and technically premature set of tests.

Thanks for reading and for considering this.