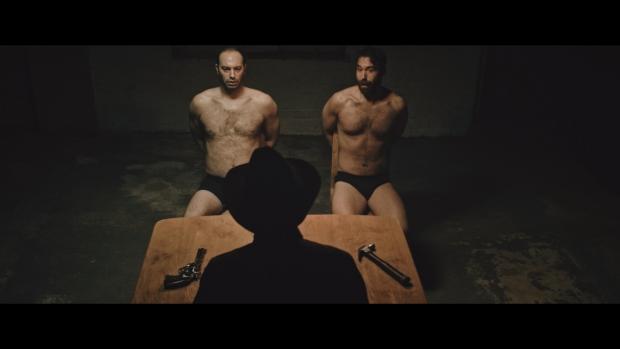 Sean Kenealy and Eric Silvera are not the first (and likely not the last) aspiring filmmakers who faced the question, How can we make our first movie with no money? That question is usually answered by taking a dialogue heavy script and shooting it with whatever resources are at hand. But Kenealy and Silvera had another goal: for that debut to be in the genre they both loved, the over-the top action blockbusters of the 1980s and 90s.Those movies spent huge amounts of money on explosions and stunt work, while Kenealy and Silvera’s assets were limited to themselves and a few places where they could shoot for free.

That insistence on doing the impossible is the raison d’etre of In Action, an often clever attempt to make a movie out of rather than in spite of their limitations. As the film’s subtitle explains, it is “Or, A Gimmick to Film a Movie over some Weekends with No Money.”

Kenealy and Silvera play a pair of would-be screenwriters reunited five years after they gave up their hopes of making millions of dollars writing the kinds of movies they loved as kids. The personal differences that helped fuel their break-up are still there, but the writing spark is rekindled when they come up with a serviceable idea based on a news article about the wedding of the President’s daughter, to be held at the White House. What if, they speculate, such an event, with most of the nation’s most important politicial figures in attendance, were to be attacked by terrorists?

In Action is at its best in the first half, at least if you have a taste for bro humor. Structuring their writing by coming up with the one-liners first (and who hasn’t suspected that that was how Schwarzenegger vehicles like Commando were written?), they spend more time doing bad celebrity impressions and dissecting their sex lives (or lack thereof) in the wake of marriage.

Their schedule is interrupted when they find themselves nearly naked and chained to chairs in a windowless concrete room. It seems that their email communications have been monitored by the government, and some rogue agents want to use their ideas as a blueprint to stage a real attack, for which they will be the fall guys.

At this point In Action turns into a jokey but standard action plot, albeit one realized by the most pointedly cheap means possible: tight close-ups, rudimentary animation, narration, even toy figures. Some of it is amusing, but it loses whatever satirical edge the project had in an attempt to hit all the action bases by any means necessary. The result shows that Kenealy and Silvera may have more of a future in television sketch comedy than in filmmaking.