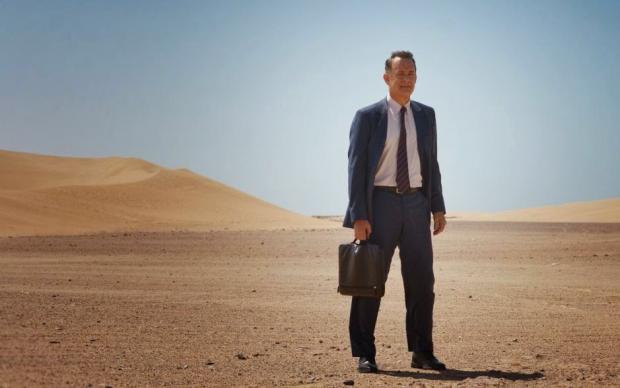 Within the first minute of A Hologram for the King, I was both delighted and appalled. The delightful part is the opening, featuring a classic Talking Heads song performed with new lyrics by Tom Hanks. That gives way to a shot of Hanks sitting on an airplane surrounded by traditionally-garbed Arabs being led in prayer.

Fortunately, that image does not precede, as one might fear, a xenophobic film. In adapting the acclaimed but somewhat sour novel by Dave Eggers, German director Tom Tykwer (Run Lola Run) has added a substantial measure of sweetness to it. The result may mostly be a shaggy-dog story, but it’s a pleasing one that leaves the viewer with the feeling that humanity may yet be able to rise above its sectarian divisions.

Hanks plays Alan Clay, a businessman trying to regain his footing after divorce and financial trouble. He is now a salesman working for an IT company that is developing holographic business meeting software. They have a potential client in King Abdullah of Saudi Arabia, who is trying to build an enormous city out of nothing in the desert. Alan is given to understand that he has no future if he doesn’t clinch this sale.

Easier said than done. He discovers that Saudi Arabia is a country where things get started but lose steam soon after. Workers sit around on idle machines. Appointments are as dependable as a sandstorm. And the fact that a lot of laws regarding alcohol and the treatment of women are often ignored doesn’t mean that it’s wise for a newcomer to do so.

Like its elusive title, A Hologram for the King never wants to be pinned down. It often plays like an update of Bill Forsyth’s classic Local Hero moved to the Middle East, but here the locals are less wily than their visitor. Alan’s experiences have the texture of one of those dreams where the same things keep repeating and everything is resistant to your will, no matter how hard you push it. Yet by the time it’s over, he’s in a good place—not one that he or we would have expected, but there are worse ways for journeys to end.

It’s lucky for me that Miles Ahead and Born to Be Blue, films based on the lives of Miles Davis and Chet Baker respectively, are opening here in the same week, as it saves me having to write essentially the same review twice: “A biopic of the jazz trumpeter who rose to fame in the 1960s, structured around a difficult (if invented) period in his later life in which he is forced to question his future while looking back on his past.” Miles Ahead is a labor of love from Don Cheadle, who not only stars as Davis but wrote and directed the film. Blue stars Ethan Hawke as the cooler-than-cool musician, known as much for his singing as his playing and even more for his heroin addiction. Both performances are excellent, though Cheadle does more to capture his subject than Hawke. Both films eschew back story, and its hard to say that either does much to introduce its subject to newcomers, offering instead interpretations that may only be valuable if you’re already invested in them. In other words, for fans only, though those will be the people most likely to pounce on both film’s willful departures from the facts.

Blue parts way with Baker in the late 1960s. Were it to move on to the musician’s late years, when Bruce Weber’s documentary Let’s Get Lost famously mapped the collapse of his youthful beauty, the perfect actor to play the part would have been Michael Shannon. He’s seen this week portraying rather a different musical star whom he resembles not at all, the king of rock and roll, in Elvis and Nixon. His co-star is Kevin Spacey, who offers a less distracting impersonation of Tricky Dick, though he has the advantage of less screen time.

You’ve probably seen the famous photo of Presley and Nixon shaking hands as they face the camera in the Oval Office. This oddball comedy (like 1997’s Elvis Meets Nixon) is based on the true story behind that photo. In December of 1970, Elvis was flush with cash from his recent comeback. He was unhappy with the state of the country as depicted on his wall of TVs at Graceland. And he was also bored. So he set off on a mission: to get the government to appoint him a “federal agent-at-large” so that he could go undercover to investigate drug use. And what better way to do this than to show up at the White House and drop in to see the man in charge?

That this actually happened doesn’t make it any less ridiculous. And while the movie gets a fair share of humor by making Elvis so self-serious (which is where Shannon’s casting works), it doesn’t go for belly laughs at the expense of a man who has become a caricature in the public memory since his death. Nor are most of Nixon’s failings dwelt on; in this pre-Watergate time, he’s mostly a self-pitying square whose aides have to talk him into what could have been a real publicity coup. The movie is slight but silly, goofy without being goony.

Everybody Wants Some!! is, like Dazed and Confused, based on Richard Linklater’s memories of his youth. The focus is again on a limited period, the three days in 1980 before the beginning of classes at the Texas university where Linklater had a baseball scholarship. We follow a house full of baseball players, freshmen and upper classmen, as they party, get drunk and get laid. I disliked these guys immediately, saw no indication that the film was going to extract anything of value out of their characters, and walked out of the movie about an hour into it.