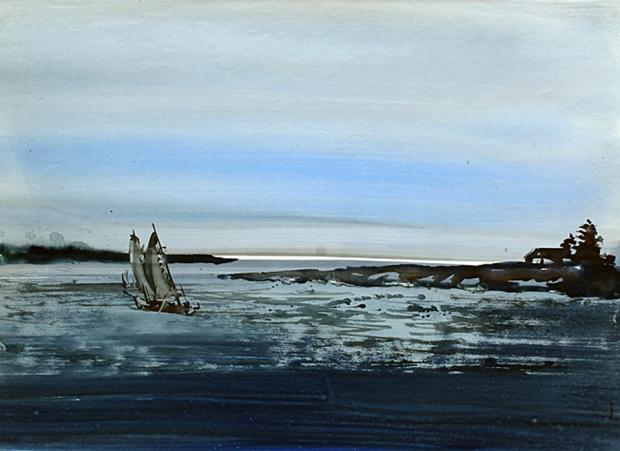 Some local art world former power couples are subjects of the current show at the Benjaman Gallery. Robert Noel Blair and Jeanette Blair, and James and Catherine Koenig. Couples and friends and colleagues in general and particularly through the Art Institute of Buffalo, where both couples met, the Blairs when he was a teacher there and she—at the time Jeanette Kenney—was a student, and the Koenigs when she—at the time Catherine Catanzaro—was a teacher and he was a student. (Another teacher at the institute at the time—and friend and colleague of both couples—was Charles Burchfield.)

This was in the 1940s. The Blairs married in 1943, and the Koenigs in 1947. Both Robert and James had recently returned from World War II overseas military service. Some of Blair’s service period sketches and photos and other memorabilia were recently shown at the Burchfield Penney. Koenig—who was injured at Normandy—on return home enrolled at the University of Buffalo in addition to taking courses at the institute.

A generous selection of paintings by all four artists is on show. You get a sense of how all four artists were learning and growing artistically together. Sometimes in the same direction, but ultimately in quite different directions.

For Robert Blair, some rugged nature scene hasty virtuosic impressionism watercolors from across the decades. An inky splotchy Stormy Sky over the Lake from the 1930s, a darkish Woodland Fantasy—Burchfield reminiscent conceptually more than stylistically—from the 1940s, and excellent Vermont Covered Bridge from the1960s. Also, some wild horses paintings amid rugged western mountain geography, and less characteristic Nude in the Forest oil on canvas, and impressionist abstraction Red Moon Rising.

For Jeanette Blair, some rather softer, gentler, more peaceful watercolors, such as a marvelous Sunset over the Water in vivid orange-reds against dawn grays and blues, a limited pallet of blues, grays, and white landscape and cloudscape Hills of Holland in Winter, and subdued fall colors patternwork Milkweeds.

Whereas James Koenig was more the restless experimentalist, playing with art world at large ideas of radical abstractionism, cubism, and hard-edge geometrics, and at the same time exploring ideas and strategies of artists nearer at hand. From the 1940s, his oil on board Trio features three abstract forms, partly geometric, partly biomorphic, morphing into human figures, while his Grain Elevators watercolor could almost be a Burchfield. From the 1950s, a cubist nuance abstract still life, and blocky darkness abstraction with barely emergent human face amid tenuous swirl forms. From the 1960s, a color patch collage total abstraction, a little in the manner of Clyfford Still. And from the 1970s, some big and brightly colorful hard-edge works, all squares and diamonds and triangles.

Stylistically and thematically Catherine Koenig ranged widely and invariably well, from early years straightforward realism to René Magritte allusion and illusion works and delicate white on white eggshell paintings—these became signature subject matter and treatment works for this artist—and partial anatomy figure studies. Magritte allusion in an oil on panel work showing a derby hat and half eggshell balanced on it. Magritte illusion in some cloudscapes behind apparently floating in midair frame devices, masking tape in one case, picture frame mat in another. A charming early work is a likely self-portrait of the artist, likely in an Art Institute setting, a sort of studio classroom, the artist standing at her easel, painting a picture of a young model—about the artist’s age—in post-war modish city-wear outfit.

The Art Institute of Buffalo was established in 1931 in the Cyclorama Building, Edward and Franklin streets, then the locale of the Grosvenor Library. The institute was intended as “a school, a gallery, and a meeting place for artists, art students and the public with no discrimination and no competition, encouraging maximum freedom of self-expression,” and students could earn credits through the institute toward a University of Buffalo degree. A large influx of students after World War II led to the need for larger quarters, and the institute moved several times to accommodate its growth, until by the mid-1950s enrollment waned, forcing closure.

The last survivor of the four exhibit subject artists, Jeanette Blair, died in March of this year. The exhibit continues through May 14.