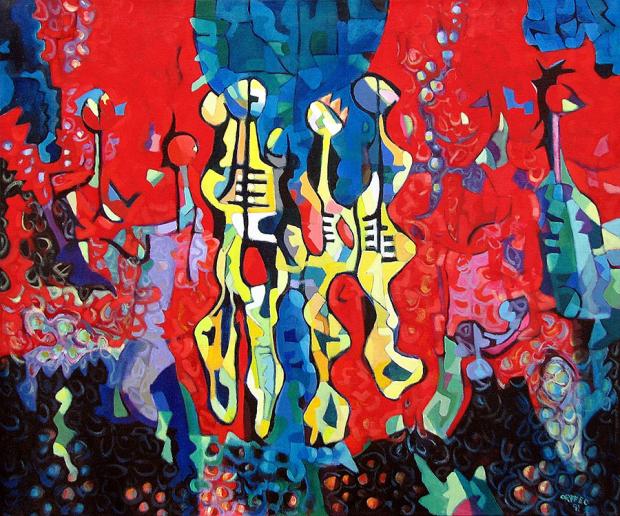 This piece is about two exhibits of the paintings of long-time area artist Joe Orffeo, one of which recently closed, and one of which recently opened. The one that just closed was at the Meibohm Fine Arts gallery in East Aurora (but you can still view the works on the Meibohm website, and they’re still on site if not on display at the gallery). The one that just opened is at the Eleven Twenty Projects gallery (1120 Main Street, Buffalo). Orffeo died two years ago, aged just shy of ninety.

He was a modernist abstract artist, but hard to characterize more specifically because he painted in a wide variety of abstract modes and manners, in a range from not so abstract at all—you can tell what he’s depicting more or less—to pure, freewheeling, gestural abstraction—you can’t. He loved color, and the earlier canvases in particular are awash in it. In his later years the colors became darker, more subdued. But darkness, mystery, a sense of fatality, were always in play in his work.

One of the earlier paintings in the Meibohm show is called Night Sky. Black sky and stars amid a contrastive gray surround of what must be clouds. It doesn’t look like Van Gogh’s paintings of the night sky and stars, but he’s thinking about Van Gogh. A later work in the same show has the same name, Night Sky. Large areas of bold, solid colors—orange-red and blue—and solid black partitioning between the different color areas, and scatter of four-pointed stars. It doesn’t look like a Matisse, but he’s thinking about Matisse.

Nature is a regular subject matter. Another subject matter that keeps coming up is bones. Abstract bones that link up in disorderly linear chains—like an arm or leg that’s been broken many times and been set all wrong every time—but sometimes coalesce into something like skeletons. Again, nothing orthopedically to crow about.

In the show windows at Eleven Twenty are a half dozen or so bones works. Bones in disorderly arrays, against backgrounds of bold, solid colors for the most part. Thinking Matisse again, but also Clyfford Still. The bones are like erratic pathways through the painting, but tunnel pathways. Crack open the smooth and even surface of the painting and expose and explore underneath.

Orffeo served in the Navy in World War II. Saw substantial action in the Pacific. He doesn’t paint much directly about the war experience, but occasionally. One work in the Eleven Twenty show is reminiscent of Picasso’s Guernica. It’s called The Sacrifice. A basic pietá scene, mother cradling her dead son. But with a distinct war connection in the Picasso painting reminiscence.

Other likely war recollection—and Picasso reminiscence—in a “Fallen Figure” series in the Eleven Twenty show. Maybe that’s what the skeleton works are all about as well, or part of what they’re about. The skeletons when they appear are often notably incomplete skeletons. Missing limbs. Sometimes several limbs.

In his later years, the bright color effects fade. He switches from acrylics to watercolors, which is part of it, but more to it than that. His palette changes, darkens. Earlier he painted spring and summer predominantly, now he paints fall.

The occasional night sky and stars paintings change, too. Now they’re not so much about looking up at the sky at night as being immersed in night, the universe, cosmic darkness.

A poignant and haunting end of life painting that was in the Meibohm show—an abstraction, but not all that abstract—is called Figures Emerging. It shows five ghostly figures in a nondescript half-lit milieu enclosed within a blackish surround. In classical epic poems, which usually include a trip to the underworld, the inhabitants of the underworld, in English translations, are always called “shades.” These figures are shades.

Before and after his war service, Orffeo studied art at the Albright Art School and the Art Institute of Buffalo. From the 1950s on, he showed in many regional shows as well as outside the region. Among his principal local artist influences throughout his career were Charles Burchfield and Robert Blair.

The Eleven Twenty Projects exhibit continues through May 9. On May 6 at 6:30pm, at the Eleven Twenty venue, Dr. Anthony Bannon, Burchfield Penney Art Center director, will give a talk on the artist.