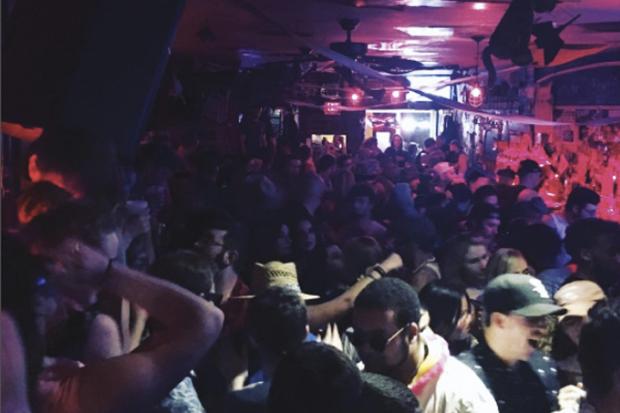 Fair warning: If you’re looking for info on BJ’s Fest, the annual indie rock fest held at the popular Fredonia dive bar BJ’s, skip Google. It’s a tricky search term. All the info you’ll likely need can be found here. The annual festival launched more than 10 years ago at BJ’s—one of the oldest bars, if not the oldest bar in Fredonia, opened in 1933. Next to pretty good wings and cheap-ass beer, BJ’s is known for live music. It is, in fact, one of the only live music venues next to a university with a pretty extensive music program. The last few editions of BJ’s Fest have been thrown by Last Call Entertainment, started by Patrick Walker, a senior music industry major at Fredonia.

A double major in music industry and audio production, Adain Licker is partners with Patrick Walker in Last Call Entertainment and helped organize BJ’s Fest last year. This year, in addition to helping organize the festival again, Licker is performing under his moniker the Otherme, as one of two bands, along with Kill the Clock, who hail from Fredonia.

“The place is kind of legendary. A lot of really big bands have played there starting out,” says Licker.

Licker has been doing his project, the Otherme, solo for a couple of years. This is the first time he’s booked his own band at BJ’s, and also likely the last time he’ll perform in Fredonia before graduating.

“For this we needed one more Fredonia act. It’s my senior year and I’m graduating and I was like, I would just love to do one set at BJ’s before I go. I’m super stoked to play.”

Lily Fischer is a student at Fredonia, a photographer and videographer, and a supporter of the music scene there.

“[BJ’s] is a great place to see live music. It’s close and intimate and everyone is there to have a great time and enjoy these bands.”

“My friend Pat, he cofounded Last Call Entertainment, which books the shows for BJ’s. His goal was to get into The Public. I wanted to surprise him because he’s worked so hard this semester,” says Fischer.

In fall of 2015, Walker started to book shows at BJ’s. This past year a few other friends have joined—Licker, John Greenan, Harper Fischer, and Lexi Reyngoudt—to help with the company, whose main goal is to promote the music scene at the University. Now the team throws shows a couple of times a month at the bar.

“This is the biggest one [Fredonia] has had in years. We have four bands each night and they’re bigger names than we’ve ever had before,” says Fischer.

The crowd is mostly Fredonia students, but many people drive down from Buffalo for the festival too, which also serves as a kickoff for the now unsanctioned Fred Fest. Fred Fest, the school’s year-end party went from an official to an unofficial party a few years ago. Once upon a time, the school would bring in major acts like Brand New for the year-end party. In 2015, they put an end to it, citing a “disregard [for] campus property, student safety and area residents, especially after excessive drinking.” In response, the student body throws an unofficial “Non-Fred Fest” each year in downtown Fredonia.

“It’s still a giant party that happens downtown,” says Licker. Though the town and school are trying to “fade out” Non-Fred Fest, he says.

Day one of BJ’s Fest features the Buffalo-based pop punk/emo band Kill the Clock, who last year released a five-song EP titled Family and Friends. Three-piece alternative rock band Bungler are also on the bill as well as The Traditional, who have made a comeback recently with the release of their angsty new album, The Queen of Heaven. The headliners for day one are Buffalo indie rock band Head North, who are preparing for a summer tour of the Northeast and Rust Belt with the popular alternative rock band Gates.

Benjamin Lieber, drummer of Head North is looking forward to the show.

“Patrick Walker, the promoter, asked us to play. He’s involved in the scene just as much as we are and he’s a good dude,” says Lieber.

This will be the band’s first time playing in Fredonia.

“It’s pretty much every heavy-hitter from Buffalo, which is why we wanted to play it. Personally I’ve been listening to a lot of Ugly Sun’s music. They’re one of my favorites right now,” he says.

Ugly Sun is set to play day two of the festival along with the four-piece indie rock band Younger Then, and Licker’s solo indie project the Otherme. Headliners for day two are Made Violent, a Buffalo-based band that’s been enjoying some pretty heavy exposure with a whole bunch of music videos that have been viewed thousands of times on Youtube, tours with bands like Cute is What We Aim For and English band The Struts, and a self-titled EP out on Columbia imprint Startime.

With the solid lineup this year, they’ve changed their entry policy to 21+ from 18+ in anticipation of a large crowd. Tickets are available at the door.