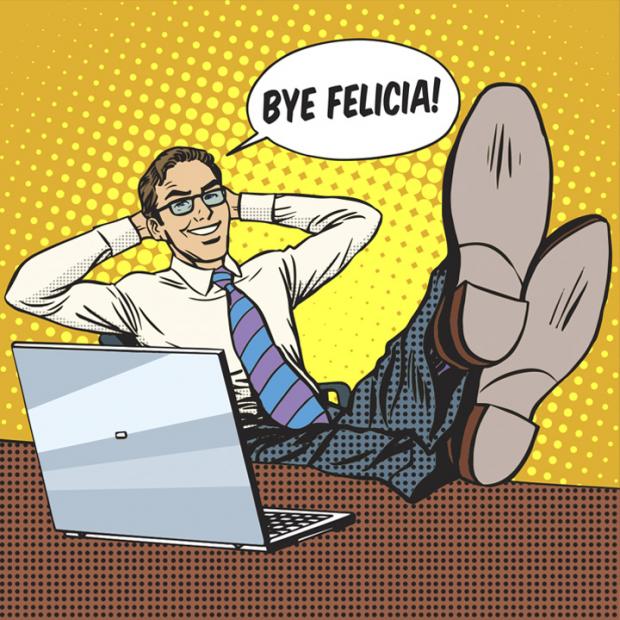 Did you know that Mean Girls was based on a nonfiction self-help book?

There’s a logic to that, actually, since the behavior and sentiments depicted in the movie are rather true to life. Exaggerated for humor, most definitely, but only so much. Sometimes it seems like gay men are the meanest girls of them all. It’s as if to say that our plight has earned us the right to be nasty and dismissive, when really just the opposite is true: We should treat others with the compassion we wish we’d been treated with, perhaps knowing what it’s like to go without.

A lot of meanness stems from ignorance and fear—not news, I know. But we’ve crossed into this unfortunate age where our ignorance becomes fodder for social media. If you have no filter, or suffer from bad boundaries, or like to post when you’re drunk—the cyber-mutation of the old drinking-and-dialing routine, you run the risk of exposing an inner voice that you meant to keep hidden. Sometimes it’s a big laugh. Other times, it’s a big ugly reveal.

Out to dinner with sober friends recently, someone passed me their phone to marvel at a particularly outrageous Facebook post. I figured it was an amusing meme or a really bad photo. Unfortunately, it was neither.

The post was a link to a WIVB news headline that read, “10 more Erie County residents die from suspected opioid overdoses,” but it was the author’s caption that sent a chill through my body.

“I know I will get shit for this,” he wrote, “but they chose to stick that needle in their arm the first time so it’s their fault. I’m not gonna sugarcoat it, it’s the truth…so that’s 10 less drug addicts in the world…bye felicia! #sorrynotsorry.”

I’m floored by the sentiment all over again just retyping his words.

The post, which the author had the late-breaking wisdom to eventually remove, received some contentious commentary from his followers. But all that seemed to accomplish was to make him dig his heels in further, attempting to defend his ignorance rather than admit that maybe he’d been wrong. Mind you, these were the words of a prideful, same-sex-married gay man living among us in Western New York. No compassion, no understanding. He’s sorry-not-sorry. Boy, is he ever.

I wonder if he also feels that becoming infected with HIV is an individual’s fault because “They chose to stick that uncovered penis in their butt,” or something along those lines. I’m glad his existence has been so charmed that he hasn’t come up against any of the struggles challenging the rest of us. Or maybe something happened to him that has formed this callousness. Regardless, it was an audacious and gratuitously mean thing to say. “Bye, Felicia”? Are you fucking kidding me? Did he move his neck muscles from side to side and snap while saying that out loud before he typed it? Was there preachy finger-waving involved?

There’s a lot of misinformation circulating about alcoholism and drug addiction lately. Some of it has us squabbling amongst ourselves on the recovery side of the equation, but none of it promotes the Mean Girl told-you-so sentiment put forth in this guy’s post. Nonetheless, I can see how he might be using some of it to justify his sentiment. Misinformation breeds contempt.

Let’s be clear: Addiction is a disease. Even if science proved tomorrow that it’s the result of a defective gene or is concretely caused by altered brainwave patterns, it would remain a disease—just a different kind.

Addiction and alcoholism are soul sicknesses. Spiritual maladies. The havoc they wreak on lives in their wake is staggering. Entire families are ill. From a cultural standpoint, entire tribes are ill. The LGBTQ tribe is one of the sicker. Our brothers and sisters need our compassion, which isn’t to be confused with enabling them to continue down the path they’re on. Finding the appropriate spot within those oft-confusing parameters is the challenge the rest of us face.

I’ve tried to get involved in alcoholism and addiction counseling several times in the last 15 years or so. My feeling now is that it wasn’t meant to be, evidenced by how it just never worked out despite my having had solid connections for jobs, despite however much it may have seemed like a great fit. But one of the hidden hoops you must jump through as a sober person in that profession is having to embrace whatever method others are using to treat their malady, even if it’s not the one that worked for you. Even if you don’t believe it’s effective. Even if you think it’s just another in a series of lousy life choices, powered by a very real illness that the person you’re counseling will not acknowledge (despite all evidence to the contrary).

The initial reasons I chose AA to get sober were simple: It was free and required no tango with medical insurance; it was something I could do of my own volition; it’d worked for my father some 25+ years earlier; statistically speaking, it was the only program that had success rates even worth discussing. Also? I was desperate—an important detail, since I believe that addicts and alcoholics need to reach a point of desperation in order to really implement necessary changes. It’s a painful process. You have to really want it.

But foremost among my reasons for staying is that 12-step programs strive to deal with ego. Once the drink or the drug is actually put down, the step work—which can be done quickly or slowly—is designed to diffuse what’s essentially a form of mental illness. For those unwilling to accept that this ego-driven mental illness exists at the core of their troubles, programs like AA and NA are very unattractive.

Another way of surmising it might be to say that if an addict’s ego gets in the way of accepting that they’re actually diseased (and not merely just stuck in a compulsive cycle), that’s really just another aspect of their illness keeping them from getting well. It’s very humbling to admit you have a disease, and therefore easy to understand why people don’t want to deal with it. Now there are lots of “alternative solutions” cropping up, telling us that addiction is a learned compulsive behavior—nothing more—which helps fuel the sort of sentiment expressed by our Facebook friend. It could’ve been so easily avoided, he thinks.

The ego sickness at the core of alcoholism is one of extremes, just like the drinking that accompanies it. On the one hand, there’s arrogance and egomania. On the other, there’s extreme inferiority. That middle ground where normal folks can be comfortable in their own skin and coexist well with the world around them? That relatively at-ease sensation proves elusive to addicts and alcoholics. They’re in a difficult spot well before drugs and alcohol enter the picture, they probably just can’t quite articulate what’s wrong. I say this having spent a good chunk of my life chasing addictions of one kind or another, and having attended 12- step meetings for the last 20 years. If you listen long enough to people trying to heal themselves, you start to see patterns emerge.

Since arrogance and ego will interfere with someone admitting they have a disease, gentler-seeming programs that don’t require folks to swallow that bitter pill are more attractive to those that haven’t yet bottomed out and aren’t blessed with the desperation I mentioned earlier. Problem is, and statistics back this up, if things haven’t sunk low enough to fuel the desperation, most will relapse. Keep in mind, 12-step programs are free, but many of the alternatives are not. Recovery has become an industry, and there are people out there looking to make money. Why steer someone toward the less attractive, cost-free model with a better track record when you can appeal to their arrogant, sick side with this other idea that sounds like less of a hassle and might make you some profit? You do the math, but it shouldn’t be shocking that not everyone has your best interests at heart.

That said, plenty of folks who go down those alternative roads of treatment can improve their situations for a time. But because the mental illness—the ego sickness at the core—isn’t being dealt with, the addiction, whatever the specifics, isn’t truly in remission. In my experience, these are half-measures.

And now we have so-called “informative videos” floating by on social media promoting the idea that addiction is a learned, compulsive behavior that can be arrested without all that 12-step hoo-hah. This is dangerous ground.

To draw a parallel, I’m struck by the way this man’s post flies in the face of an issue at the core of the LGBTQ struggle: Were we born this way or was this a choice? I’m hard-pressed to believe he’d go with what’s behind door number two in that scenario. My point to him is that, in a very similar way, addiction exists at birth. Sure, there may be a continuum involved, but those of us who have it in the worst way can see it in our childhoods and adolescence, in the ways we interacted with our peers, in our ego-driven assumption that society’s rules didn’t apply to us, in the way that we’ve always craved more of everything when there’s been plenty, like there’s a bottomless pit inside us demanding to be fed at all times. It’s always been there—lurking, waiting to join forces with drugs and alcohol so that it can reach its full, havoc-wreaking potential. Once that’s achieved, the cycle feeds itself on ugliness and chaos while the addict conveniently avoids having to see all the damage they’re doing with any sober clarity.

Before anyone takes my analogy too far: I’m not saying that homosexuality is a disease like I believe addiction and alcoholism are. But I do think that, for a large majority, these are things that exist in us from the beginning. You may choose not to come out of the closet, but your homosexuality remains. Avoiding sticking that needle in their arm the first time may be a real option, but the mental illness underneath still exists, thus driving the same sick individual to drink, use other drugs, eat, spend, gamble, or have sex with similar abandon. It’s like an endless game of Whack-a-Mole, and will continue as such until the core issues are addressed.

Being homosexual is something worth celebrating and being prideful about—owning who you are, not compromising to accommodate any stigmas. Lacking empathy for people stuck in destructive patterns is not something to be prideful about. Since so many of our social structures, our cultural rituals, are built around imbibing in behaviors that have many of us walking the thin line between recreation and addiction, it’s easy to understand how people on the outside looking in might become confused. What’s not so easy to understand is how individuals among us—within a community that has survived a plague and is engaged in an ongoing civil rights movement—could have so little compassion for the sick and suffering on such a basic human level. This man essentially said he thinks these addicts deserved to die. He’s proud enough of his viewpoint that he posted it even though he knew it would upset people—it’s a harsh, premeditated assertion. Junkies aren’t fun to deal with, but that doesn’t mean it’s okay to wish death on them.

Maybe by having exposed his outrageous thought on social media, badly cloaked in a tough-love stance, he’ll learn something valuable. But I doubt it. If I recall correctly, the Mean Girls were really dumb…and yet, they have my sympathy. So does this ignorant fool. Just barely.