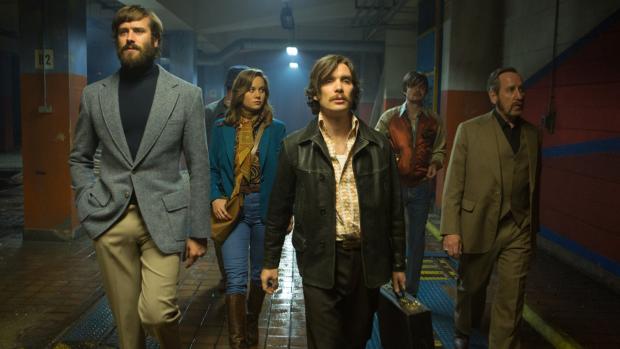 Here is one of the very many ways in which movies differ from real life: In the former, there is something inherently pleasurable about watching people shoot each other. I’ve never seen it in real life, and hope that I never do, because I’m sure it’s horrifying. But on a movie screen there’s something compelling about it, and not simply because we’ve been conditioned to the meaning of it. Maybe it’s just the tension/release thing, or action/reaction: we see (and hear) an event, the shot, and a millisecond later we see the result, a burst of violent movement. Put a whole bunch of these together, and you have the equivalent of a big slapstick pie fight.

(Of course, the greatest cinematic gunfight of all time, at the conclusion of Sergio Leone’s The Good, the Bad and the Ugly, uses almost no gunshots at all. But I digress.)

Free Fire runs a bit less than 90 minutes, almost all of which consists of people shooting at each other. There are a dozen or so of them, all involved in an illegal arms deal going down in an abandoned warehouse near Boston. The opening section of the movie introduces us to the parties involved, but given the variety of accents (the buyers have IRA ties) and the generally skeevy mien of the ensemble (it’s set in the late 1970s, so polyester and pornstaches abound), it’s a struggle to keep them all separated. When the first shot is fired, it’s every man for himself.

And one woman, played by Brie Larson, who by dint of her gender is one of the few characters I was able to keep straight. There’s also Francis (Michael Smiley), the IRA guy who’s the oldest of the lot; Vern (Sharlto Copley), from South Africa, who looks like the spiv Eric Idle used to play on Monty Python; and smarmy Ord (Armie Hammer, unrecognizable under a bushy beard). You may find your attention grabbed by some of the others.

Free Fire is the creation of Ben Wheatley, with his usual partner Amy Jump, who comes from the fertile world of British TV comedy. He has been gaining a cult following for his films in recent years, with last year’s High Rise the first to gain much international attention. The team’s work, which is often concerned with violence, is nothing if not cerebral, which is what makes it especially hard to get a handle on this film. It’s filled with dark humor, but it’s not openly comical. The level of violence and injury remains more or less constant, without the escalation of a horror film. And with so much confusion—the warehouse might as well be a jungle, too big and unfamiliar for us to define the terrain in our heads—there’s not a whole lot of suspense. If anyone will be left alive by the end, it’s going to be random, so much so that Wheatley might well have filmed multiple endings a la Clue.

It seems destined for cult status, the kind of movie that will improve on repeated viewings, assuming that Wheatley and Jump were working from a design that made sense to them even if we can’t immediately see it. Certainly the large cast has fun with their roles and dialogue. And the original score sounds like the best album side-long jam that Uriah Heep never got around to recording. Maybe I’m just being a spoilsport in asking, What’s the point of it all?

It wasn’t until the end of The Lost City of Z, which runs 141 minutes, that I understood writer-director James Gray’s perspective on his protagonist, a British officer who in the first decades of the 20th century was involved in three expeditions to South America in search of the ruins of an ancient civilization. The same quest was the ruin of Spanish conquistadors who called it “El Dorado;” for reasons of his own, Colonel Percival Fawcett (Charlie Hunnam) calls it “Z.” (Pronounced, of course, “Zed.”)

My perspective may have been affected by the same expectation a lot of viewers are likely to approach this with, that the film will be in the same vein of Aguirre, Wrath of God or Fitzcarraldo or Apocalypse Now, in which explorers find only madness at the heart of the jungle. That’s not entirely untrue here: by the time Fawcett leaves his loving wife Nina (Sienna Miller) for the third time after two failed attempts, you have to wonder if he’s really thought this idea through. But he is acting in reaction to the Euro-centric view of his time, that white civilization is so far above anything else that the world has seen that any attempt to prove otherwise is folly bordering on sacrilege.

Still, this perspective isn’t clear enough to justify the film, which is too scattershot in its approach to have much impact. It often feels like an eight-hour miniseries that has been clumsily cut down to feature length, lurching ahead in time and seldom giving a clear picture of the scope of any of the expeditions. Kudos to Gray for wanting to update the kind of epic that David Lean used to lavish Hollywood money on (as well as for filming in 35 mm), but his film seems to prove that, despite what Fawcett argues, a man’s reach should not exceed his grasp.

There has probably never been a worse time to unleash a golf drama about the ticket-buying public given current outrage about the amount of time our chief executive spends on the game, but that’ s just the bad luck of the producers of Tommy’s Honour, who can hardly have known what kind of climate they would be releasing this into when they first conceived of it however many years ago.

Scotland’s Tommy Morris, known as Young Tom Morris because is father was also famous, is considered the greatest golfer of the 19th century, a player whose would have gone on to greater fame had he not died at the age of 24. He and his father are said to be the fathers of the modern game of golf, though how that differs from what went before is likely to be of interest only to those deeply invested in the green: anyone who would peruse his Wikipedia entry, note his advances in the use of the niblick and the rut iron and his unusual putting method and think, This would make a terrific movie! should probably give the family checkbook to his wife.

Wisely, the film (directed by Jason Connery, son of Sean, and that’s as Scottish as you can get) minimizes this kind of stuff in favor of generational problems between Morris father and son (Peter Mullan and Jack Lowden, respectively), and with tragedy in Tommy’s love life. For all that, though, there’s not enough here to satisfy any viewer who isn’t content to watch red-haired men hit small balls with long sticks.