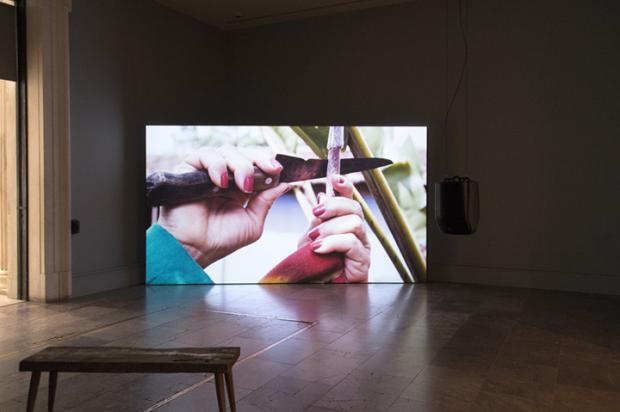 Any or all of the main exhibit artists currently at the Albright-Knox Art Gallery—three solo artists—Jacob Kassay, Willa Nasatir, Eric Mack—and the collaborative duo Tamar Guimarães and Kasper Akhøj—might leave you scratching your head. An accompanying handout booklet of brief overview essays on the artists and their works might or might not help.

One room of works by Kassay consists of table-top displays of hundreds—maybe thousands—of the sort of household items that normally wouldn’t be out in the open, but in a kitchen or bathroom cabinet or maybe a shelf in the garage or basement. Arranged in categories like foodstuffs, cleaning items, bathroom medicine cabinet items, car care products, etc. Slightly reminiscent of Andy Warhol’s Campbell’s Soup cans and Brillo boxes, but when Warhol made those works they were something novel and different—nobody had ever made art about soup cans and Brillo boxes before—and the point was multi-level sardonic commentary on modern consumer culture, with reference to a range of consumer products from fine art—painting and sculpture—to soup and soap.

The booklet talks about how Kassay’s works display “the innards of domestic life that would never be fully visible otherwise,” and so illustrate the “absurdity of our illusion of domestic order,” along the way capturing “the surreality of objects that familiarity had rendered practically invisible.” Reminding us of “the extent to which we deploy, unaware, a kind of self-defense that allows us to rationalize, normalize, and internalize even exceptionally strange developments in order to continue operating in the world.” Not clear just what “exceptionally strange developments” we are talking about. The copy goes on to call the self-defense mechanism “a useful skill, but also one that risks making us blind.”

In a work specifically with reference to blindness, Kassay has added a Braille border—entirely of the Braille letter H—along the handrail of the staircase between the 1905 building and 1962 addition. A work somehow about seeing and feeling. Only visible—so to speak—to the blind.

Willa Nasatir’s photos show a fragmented world as if viewed through water. Photos combining still life elements—studio constructions of a multiplicity of unrelated and/or unrecognizable items—and landscape, or cityscape—usually there’s a window in the background, through which we glimpse New York City skyline—as if dissolving and disappearing before our eyes. Work done with mirrors and mylar, according to the booklet essay, artfully interposed between the photographic subject and the camera. It becomes a game of what items you can recognize—a charred baseball cap, a shiny chrome ball with rod tentacles, like the original sputnik, a snake, maybe rubber, maybe real, some smashed eyeglasses—and what if anything by way of theme or story you can make of it. The booklet essay relates the work to a blog called Jeremiah’s Vanishing New York, and to how the AIDS crisis decimated and devastated the gay community in New York City in the 1980s and beyond.

The Eric Mack segment is called “Vogue Fabrics,” but the “vogue” term seems ironic. Jumble piles and clothesline arrays of torn and tattered and occasionally paint-smeared fabric. Street dress for street people in the sense of homeless. Works reminiscent, the handout booklet notes, of works by Robert Rauschenberg. The umbrella or parachute works, or the paint-encrusted old sleeping bag hung as an old master painting or sculpture. “Clothing is ultimately and inherently linked to the human form,” the booklet informs, and so, “however abstract they appear, Mack’s works always smuggle the body into the exhibition space.” Though not as clearly and poignantly as the sleeping bag piece.

By way of elucidation of Mack’s art, the booklet quotes the artist about how one of the things he is trying to explore and assess in his work is “the hybridity of painting as an active dimensional gesture.”

Non-textile props among the fabric mélange include several types of grid structures—a bamboo garden trellis, some pegboard—lending a counterpoint note of order to the main effect disorder. Plus a folding stepladder used as a makeshift clothes rack, al fresco clothes closet. (Humbling for me to discover. I thought I had invented—indeed perfected, over many years—that usage for a stepladder.)

Tamar Guimarães and Kasper Akhøj’s work consists of segments of a movie in progress about their research regarding a town in Brazil where a large portion of the inhabitants are mediums—psychic conduits to the spirit world, healers, shamans. The segments record activities and dialogue of townspeople including mediums and patients or clients of their medium practice.

In one quite poignant sequence, a man in his sixties or seventies tells about his mother, when she seemed to be nearing the end and could no longer care for herself, and the man, the son, who was perforce caring for her, had to give her a bath. A “difficult experience” for him, he confesses, “for a man like me, brought up in a particular way.” Soon afterwards, she dies—he says she died—but then somehow—apparently through the ministry of mediums—she revives and recovers. After which, “she was transfigured,” he says.

The multi-artist show continues through June 18.