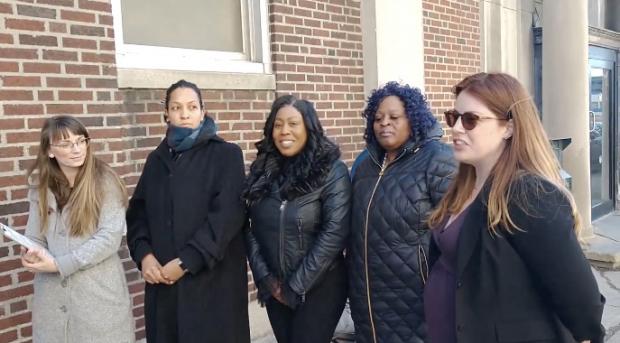 There are some problems with local designating petitions. The lede in the Buffalo News exclaimed,

Five women candidates looking to break the all-male hold on the Common Council charged Tuesday that challenges to their designating petitions stem from “the Erie County political machine” practicing “sexist politics at its worst.”

“A series of frivolous and unwarranted petition challenges have been filed against our campaigns in what will amount to a failed attempt to knock us off the June primary ballot,” the five women said. “This is an effort to block five women from running for Common Council so that their five male opponents may sail smoothly to victory, unchallenged and unchecked.”

It is only inadvertently an effort to “block five women” from this particular run, because all five of them used a defective form of petition. If a “#clubformen” candidate had done the same, then the same challenge would be underway. In the 1985 case of Stabler v. Fidler, the New York State Court of Appeals wrote,

Both the actual operation and public perception of the electoral process as one that seeks regularity and evenhanded application must not be distorted. The Election Law must have a neutral application unaffected by party affiliation, policy, position, incumbency, race, sex, or any other criterion irrelevant to a determination of whether its requirements have been met. In short, a too-liberal construction of the Election Law has the potential for inviting mischief on the part of candidates, or their supporters or aides, or worse still, manipulations of the entire election process.

Ballot access in New York State — like many things — is byzantine, difficult, and overloaded with traps for the unwary. Until and unless someone begins to take that problem seriously, these rites will continue to play out, year after year. It simply should not be a complicated or tricky matter to get your name on a ballot, and it acts as a disincentive for regular people to run for office.

But, for now, it is tricky and byzantine. Unless Albany changes things, all candidates — men and women — have to play by the same rulebook. When a candidate relies on the advice and assistance of a political operative or consultant, she is entitled to competent, careful, and knowledgable assistance.

New York State Election Law §6-132 sets forth the exact language that needs to be present on a designating petition for a party nomination.

Again — the necessary language is right there in the statute. The Board of Elections even has a fillable PDF candidates can use. School board elections for the City of Buffalo, however, are non-partisan, and the “enrolled voter of the ___ party” language is omitted. An independent nominating petition, for instance, can be used. It does not contain the party enrollment language.

The Election Law does not screw around, and is hypertechnical. It is often difficult to predict what a court will find to be an “insignificant” petition flub and a fatal petition flaw. Petitions will be invalidated if you use a binder clip rather than a staple to fasten multiple pages together.  Election Law § 6-132 (2) requires that a subscribing witness to a designating petition be an enrolled voter in the same political party as the voters qualified to sign the petition — a petition-gatherer cannot simply change the witness verification to reflect his party membership if it differs from that of the signers. Petitions will be invalidated if the signers’ addresses are absent or incorrect, or if the subscribing witness omits his or her Assembly District. Signatures collected by a subscribing witness who puts down an incorrect address will be invalidated.

The Courts will look to whether a defect in a petition is material or insignificant. Here, given that the actual language that must be present on the petition is included in the statute, there is little chance that a failure to include it will be deemed “insignificant”.

So it is that the petitions submitted on behalf of several candidates backed by WomenElect and Eleanor’s Legacy are in jeopardy — as are their entire campaigns — over a small but hugely significant clerical omission. This all highlights the importance of proofreading, which is also gender-blind.

Here is the top and bottom of one page from Common Council candidate Bernice Radle’s designating petitions (I have redacted people’s addresses):

And here, by comparison, is the top and bottom of her opponent’s petition:

Ms. Radle’s petitions do not include the “and am an enrolled voter of the Democratic Party” text under “Statement of Witness”. This is a requirement for a valid party designating petition, and the petitions submitted by all five WomenElect-backed female candidates for City Council reportedly omit this language.

The problem is not sexism, but ballot access on the one hand, and following instructions on the other. I don’t know exactly who is challenging these petitions, but the paper appears to be facially, legally invalid. In a contested, adversarial electoral scenario, this is fair game, and if the candidates don’t know this, then certainly the people advising them do.

That is the real tragedy here — that people “advising” candidates in an effort to elect more women in New York gave defective advice and materials that may be fatal to these campaign efforts.

Literally, you had one job.