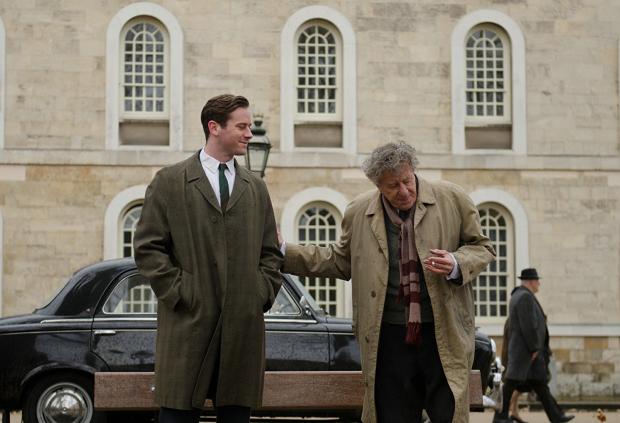 I have never seen a film by Stanley Tucci that I haven’t loved. Tucci is of course best known as an actor, but he has also directed a handful of films, beginning with his best-known, Big Night (1996, co-directed with Campbell Scott), about two brothers who own an Italian restaurant. After the slight but entertaining comedy The Imposters (1998), he made another gem, Joe Gould’s Secret (2000), based on the work of New Yorker staff writer Joe Mitchell. I was afraid that he had left directing behind him, though imdb.com tells me that there was another movie, Blind Date, in 2007. But his new film, Final Portrait, makes me hope that the fat salaries he (presumably) got for those Hunger Games movies will give him a cushion to do more work behind the camera.

Adapted from a memoir by American writer James Lord, Final Portrait recounts the time in 1962 he spent sitting for a portrait by his friend, the Swiss artist Alberto Giacometti. Told it will take only a few hours of sitting, over an afternoon or maybe two, Lord finds that the skills of his friend, a noted sculptor who in his later years turned to painting, do not include time management. Days stretch into weeks as Lord watches Giacometti compose, construct and then blot out his work, time after time.

You don’t need to have any knowledge or even interest in art history to enjoy this. For one thing, Giacometti is played by Geoffrey Rush, still bearing the unruly mop of hair he sported as Albert Einstein on a recent cable series. For the first stretch of the movie he doesn’t say anything, and it’s such a delight to watch the actor shuffling around in a Quasimodo-like posture, cigarette dangling out of his mouth, face displaying a vague dissatisfaction, that I hoped he would go through the entire film mute. Lord is played by Armie Hammer, an actor whose almost excessive handsomeness has always reminded me of contract players of the end of the studio era, guys like Rock Hudson and John Gavin who were hired on the theory that they could be taught to act as long as they already were born with the looks. I’m still not sure Hammer has it in him to be a first-rate actor, but he’s perfectly cast as a complete opposite to Rush, and the interplay between them is a delight.

So too is the setting of Paris in the early 1960s, before celebrity culture took over Europe: It may not have actually been this agreeably grimy, but it’s how we would all like to think it was. It’s a most unstodgy movie about that dullest of dramatic premises, the Artistic Process, a movie that will turn even one of these endless winter days into the equivalent of a spring afternoon.

For some years I have suspected that if you were to take any given action scene from a modern movie, with its jagged camera work and whiplash editing, and break it into its component shots, you would find that it does not so much show us something happening as suggest it. I suspect this is true in larger ways, on a story level: that there are often details we’re never given but merely assume because it’s a simple genre with pretty basic rules. I picture an editing room in which the editor, clearly an old school guy, argues that a certain shot has to stay because it explains something that will happen next, only for the director to say, nah, it just slows things down, and the audience will get it.

That may not actually happen in Hollywood blockbusters, but it’s essentially what director Lynne Ramsey has done in You Were Never Really Here. Adapted from a short novel by Jonathan Ames, the film stars Joaquin Phoenix as Joe, a guy you call when you want something done that you can’t go to the police for. His specialty seems to be rescuing young girls who have been caught up in sex trafficking. Joe is a former FBI agent and Iraq War veteran who is haunted by all the bad stuff he has seen, as well as by his abused childhood. His job lets him restore some moral balance to the world, or at least work off some of his demons.

Right here I’m going to stop and admit that I pulled most of these details from reviews of the Ames book, which sounds like just the kind of thing that fills up airport bookracks around the country. Whatever you think of it, we all know the genre, and Ramsey (who adapted the screenplay) knows that we know it. So she elides all the details, or as many as she possibly could. When Joe goes into a building to free the girls working there (not the only scene in the movie that will remind you of Taxi Driver), we get only suggestions of violence a montage of security camera footage. The same with his tortured flashbacks: we see an angry man and a scared boy, so we assume this must be a memory of Joe’s childhood.

Defenders of the film (it was received rapturously at Cannes, where Phoenix was named Best Actor) praise its leanness, saying it tells us everything we need to know with minimal effort. But where’s the merit in that when what we are left to fill in are details of a lurid, depressing story? And doesn’t the fact that we’re able to recognize the music without being able to make out the lyrics simply mean that we’ve heard this song way too often? It seems to me that Ramsey’s achievement here is to take an unpleasant genre exercise and make it into one that is merely frustrating.