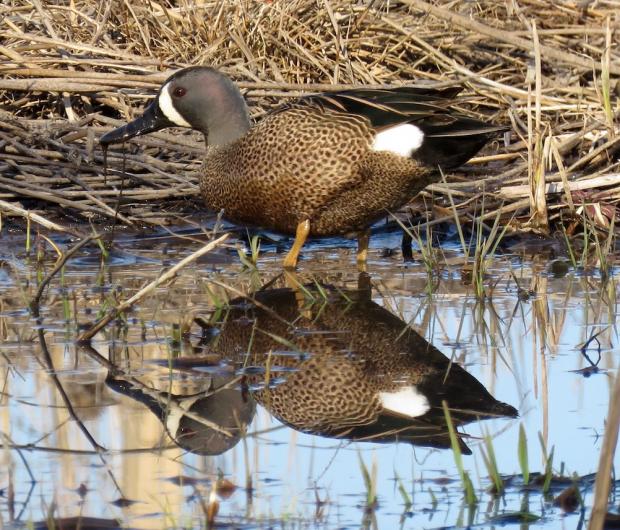 The Blue-winged Teal is a “dabbling duck” that can be found across almost all of North America except for the far north west coastal areas of Alaska and the Yukon and the dessert regions of the Southwest. They winter on the gulf coast, and along the coasts of central and South America.  These ducks can be found wintering as far away as Brazil and Chile. They migrate over open ocean, and breed on inland marshes, lakes, ponds, and creeks. This is where they find their favorite food sources, floating and shallow vegetation and small aquatic life such as mollusks, crustaceans, and insects. They voraciously consume seeds from plants that grow on mudflats. They will nest at Times Beach Nature Preserve and use the cattail marsh and sedges as cover. Watch the video and you will understand why they are called a “dabbling” duck.

If you just don’t get enough information about climate change and catastrophe, boy do I have the perfect sunday morningread for you. Just keep reading.

Mama Bear tears the place up, again Climate doubters including many on the national and local political stage are constantly making stuff up. Listening to mama bear Sarah Palin last week, as she tried to take on Bill Nye the Science Guy about his standing regards climate change was both gut wrenching and horrifying. Sappy Sarah is the trailing end  (we hope) of the “business as usual” generation, is she not? The “group no-think” experiment that she characterizes and Sarah who “reads all the books and magazines, ya know” was promoting a new scam, -a movie, called  “Climate Hustle.”  She was doing this in the in the friendly confines of the Halls of Congress.  This denial business is a conspiracy minded oevure by the great minds of what someday may be referred to as the “losiest generation.” Lets lose them ASAP, OK? Just so they dont make the rest of us the “last” generations.

Speaking of broken minds- This week the Washington Post published a piece by Chelsea Harvey that reviews the reality of the scientific communities overwhelming consensus that climate change is real and it is created by humans. The story “Research shows-yet again- that there’s no scientific debate about climate change” is a must read if you have any lingering or drooling doubts.

Blowin in the Wind We have to keep reminding our selves that climate change is not just about global “warming”.  Sara Palin might want you to be confused, but on this issue its really easy not to be. It is scientifically true and measured that the average temperature of earth’s atmosphere is warming. But climate change goes way beyond that simple basic fact. As the atmopshere becomes destabliized because of temperature and other factors, atmosphereic interactions will promote variable weather, including extreme weather events. Big and sometimes unpredictable storms and weather patterns will and are becoming more frequent. This is and has been true in our region as it is across the planet. Whatever may come, it will be accompanied by weather patterns the likes of which most humans have never or rarely experienced during our species short time on earth.

On a positive note, some scientists are predicting that our region, the Great Lakes, will be a region of relative stability for coming generations. Our stability comes from the fact that the Lakes contain 20% of the earth’s fresh surface (drinking) water, and that our geography will help stablilize the climate here. Fresh water and relative stability will make us very attractive to climate and environmental refugees in the coming years and generations.

“Relative” is the key concept here. While we may not see the vast coastal flooding that is predicted for cities and regions at the ocean’s edge, and thus avoid that particular form of annilhilaton, the not so good news is that we can probably expect some whopper storms including great winter blows and seiches that barrel down the length Lake Erie. What we used to call 100 year storms may indeed become more frequent. These storms hit our Eastern Lake Erie communities and shorelines hard.

One of Buffalo’s greatest disasters happened in October of 1844, when the fledging city of Buffalo was hit by a wild and deadly seiche.

We need to think of planning that helps to reinforce our outer harbor and shorelines just like they do in ocean coastal communities.

The changes that will come with the influxes of new people, and it could be a lot of new people, and our responsibilities to these future generationsare the best reasons that we need to focus carefully on our stewardship of not only the water resources, but of how we develop, expecially along our shorelines. I would add that our responsiblity can be focused through the lense of how we allow public money to be spent.

We are at the cusp of change. It is important to put this into a context that transcends political seasons, political regimes, and economic strategies that are designed to benefit a few elected leaders, even though we are responsible for electing them. So buckle up, keep your eyes open, we are in for a bumpy ride.

It is an older study, but in 2006 a group of scientists determined that there is a real possibility that salt-water fish extinction will occur by 2048.

The study has been revisited recently including this Huffpost report, which was produced in 2014. The news here is also both good and bad. The initial report helped to create action agenda’s around the world targeting “sustainable” fisheries practices, including new regulations in some regions setting fishing limits. The bad news is that this has not been enough.  The oceans, which we have always assumed to be resilient,  continue to struggle. Now that we are further into the era of both climate change and economic exploitation of the world’s oceans and fisheries, things are looking gloomy, maybe even on target for the great ocean extinction. Scientists are not backing away from the 2048 date. Politicians are.

The Great Lakes have similar issues.  While many of our native Lake fishes and fisheries went missing long ago, along with fragile habitats that support spawning, we still have some pockets of biodiversity. These include areas such as the Bell Slip on the Outer Harbor, which supports Muskellunge spawning. the Bell Slip was restored by NYSDEC and the NFTA nearly a decade ago.  They also built what is known as the Green Way Nature Trail on that part of the Outer Harbor.  It is just west of Wilkeson Point Park and Times Beach Nature Preserve. It is a great place to enjoy the wilderness in our front yard.The Bell Slip remains one of the few good muskellunge spawning areas in our region.    You can enjoy the Bell Slip and the Green Way Nature Trail. For more information click here.

USA Today published an important story this past week linking climate change to much more than environmental changes. The report links to issues including human health, the economy, and national security. This is a great resource to get your mind around the current state of affairs. And it sucks. Read it Here

-Have you noticed that the Earth’s access axis and the angles of sunrise and sunset are shifting? Scientists have. And they are linking it to Climate Change. Happy spring!

Climate Change may be causing the Earth’s axis to shift

is brought to you by GreenWatch, The Public, and the Friends of Times Beach Nature Preserve.

Please consider a donation to keep our programs alive! Buffalo’s Times Beach Nature Preserve is full of delightful surprises and it is right downtown, across the Buffalo River from Canalside.