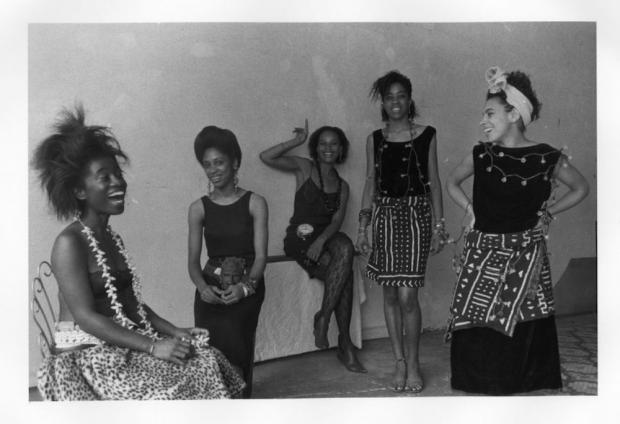 Over the years, scholars have read the contemporary Feminist Movement in the United States, and rights movements at the end of the twentieth century generally, as building on the successes of the civil rights struggles of the 1950s and 1960s. However, more recent scholarship sees earlier black left feminism as setting the stage for the more visible feminist work of the 1970s.

Back home in New York…I gathered all the young women I knew who were flirting with the art thing and held a meeting. A meeting, because that’s what black women do; we call meetings, form clubs, and get things done. And for those who don’t know this to be true, one early example is the black women’s club movement that sprang up across the country in the late nineteenth century, and how it mobilized to aid women of little means.

It turns out there were two feminist movements. And neither actually had much use for the other. There was the one we all know about. Call it the mainstream feminist movement. Composed overwhelmingly of middle-class, well-educated, white women. The other one we’re not so familiar with. Composed of black women with all the social and economic disadvantages traditionally associated with that category. And among important differences, that the black movement got started earlier than the mainstream movement—more like the 1950s than the 1970s, but arguably way before the 1950s—and that it was more comprehensive than the mainstream movement—first of all, just in including black women, but then poor and disadvantaged women in general, worldwide, which is to say, significantly, throughout the third world—and also that the black women’s movement, in its origins, had a substantial connection to artmaking. Which artmaking could be interpreted very differently from mainstream middle-class ideas about art and artmaking. Not always was, but could be. But different or not, black women artists were no more welcomed into the mainstream art world, than they were welcomed into the mainstream feminist movement. Which is the reason they needed their own movement, as regards feminism, as regards art. So that one effect of the black women’s movement was the creation of new modes and definitions of art, which were often as much about community—the movement itself—sisterhood—as about art objects, art product.

The Albright-Knox current exhibit We Wanted a Revolution: Black Radical Women, 1965-85 presents numerous art objects—paintings, sculptures, prints, posters, videos—by the subject radical black women—along with copious documentation materials—photos, letters, newsletters, announcements, magazine articles, magazine covers, in vitrines located throughout the exhibit—to attempt to also expound the movement process. And even suggest—as much as possible, as much as feasible—the new interpretation, new definition, of what is art. A few of the objects also relate to the new interpretation and definition.

Meanwhile, among the art objects—old definition, basically—are some stunningly beautiful and poignant works in a range of moods and modes from painterly figural—Faith Ringgold’s black female role models multiple portraits mural For the Women’s House, i.e., the Correctional Institution for Women, Riker’s Island, New York City, or Emma Amos’s demure self-portrait sniffing flowers, in a circle in a square, reminiscent of Leonardo’s Vitruvian Man—to pattern abstract—Virginia Jaramillo’s Visual Theorem tattered fiber and earth pigments work, with a tactile quality evocative of ancient papyrus, or Faith Ringgold’s sensuously colorful Feminist Series #10/20: of my two handicaps. Works ranging from comical sardonic—Ayoka Chenzira’s Hair Piece: A Film for Nappyheaded People—to deadly serious about the persistent over the decades deadly issue we recently found an apt slogan for, i.e., Black Lives Matter, Elizabeth Catlett’s sculptural work Target, a portrait head of a black man, with gunsight circle and crosshairs inches in front of his face—to seething with righteous anger, Howardena Pindell’s video Free, White and 21, staged interview of a black artist (Pindell) with a white curator (Pindell in whiteface), who explains to the artist that for her work to be recognized and accepted by the art world powers that be, it needs to better conform to white art practices and principles—to purely celebrational, of black culture, black experience, black family, Carrie Mae Weems’s album of candid photos of her own extensive family in various interactions. Portraits of love and joy, amid whatever social and economic vicissitudes.

Around the time the black women’s clubs relevant to the present exhibit were getting started, the officialdom art world was deeply in thrall to abstract expressionism, an appropriately non-political art mode—or at least the politics could be readily disguised beneath a scrim curtain of artwork inscrutability—for the politically fraught Cold War era. In reaction and contrast to officialdom art and the galleries and institutions and funding sources that so systematically excluded them, but more importantly that the black women artists had something to say, loud and clear and unmistakably—and that was ultimately political—the work on show in this exhibit is by and large and for the most part representational, plain-spoken, manifest as to the meaning and attitude of the artist.

So that it is remarkable that the new definition art that ultimately emerged from the black women’s movement is obstinately inscrutable, abstract, abstruse, and most surprisingly, non-political. Work in particular of the regularly collaborative team of sculptor and performance artist Senga Nengudi and dancer Maren Hassinger. Sculptures consisting of stretched nylon—like exposed nerve fibers, or antennae in all directions—and sand counterweights. In combination or not with performance art about—as much as about anything, it would seem—ephemerality. Transience, mortality, brightness falls from the air. Particularly about gestures. Not gestures of the sort we talk about when we talk about gestural painting, that leave a trace in the paint on the canvas, but gestures that leave no trace. That disappear, maybe scarcely seen, or scarcely understood, and unrecorded. The most notable scrutability feature of the work being the communitarian aspect. Enactments of black sisterhood.

Another performance artwork mostly about black sisterhood extensively documented in the exhibit is called Rodeo Caldonia, by Lisa Jones and Alva Rogers and other collaborators. Lisa Jones also has an essay in the exhibit catalog, as does her actual sister, Kellie Jones. (Not to paternalize, or maternalize, but it seems of interest and worth mentioning that Lisa and Kellie Jones are daughters of the poet couple Amiri Baraka and Hettie Jones.)

The exhibit continues through May 27.