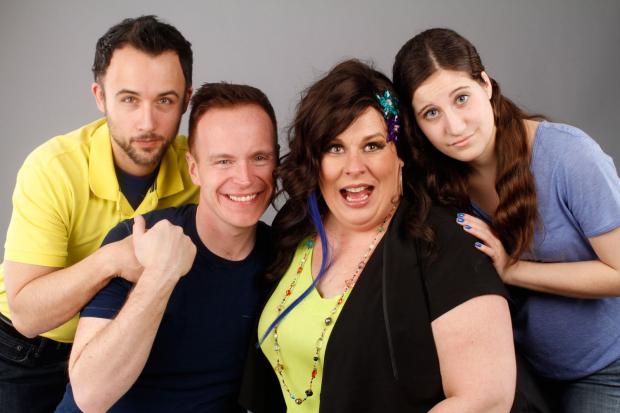 Kerrykate Abel (second from right) with the cast of Harbor, currently playing at Buffalo United Artists. Photo by Cheryl Gorski.
by
Anthony Chase
/ Apr. 15, 2015 1am EST

Harbor, a comedy by Chad Beguelin, is the story of Kevin, a gay man whose idyllic life in Sag Harbor is disrupted by the unexpected arrival of his ne’er-do-well sister and her teenage daughter. Those familiar with the stage work and cabaret persona of Kerrykate Abel will not be shocked to learn that she plays the ne’er-do-well sister in this Buffalo United Artists production.

Kerrykate specializes in brassy dames, typically with hearts of gold. As Buffalo’s First Lady of Cabaret, her material fluctuates between needing to believe the lies of handsome men, cynical dismissals of romance, and a compulsion to embarrass her own teenage children—often underscored by the banter of accompanist Chuck Basil. On stage, she was recently the former whore now married to a cop in Poseidon: An Upside Down Musical, but her roles have ranged from an impressively buxom Salome to the full range of overbearing mothers (In Gabriel’s Kitchen and yes, there was a Mama Rose) and best friends with questionable judgment (The Divine Sister, among numerous others).

In her own eyes, Kerrykate is a cabaret artist and “mother of an actress/artist daughter and an award winning gymnast son, and the wife of a brilliant writer.” You will also learn, from her answers to the questions below, that she identifies, with peculiar fervor, with the lives of Julie Wilson, Mabel Mercer, and Elizabeth Taylor.

What word would your friends use to describe you?
“Passionate.” Also, “direct” and “eccentric.” That’s three. They might also say, “She cannot count.”

What quality of your current character is most unlike your own personality?
Donna is an opportunist out to get whatever she can from anyone. I am not like that.

What quality of your current character is most like your own personality?
She enjoys a good time, and she is very concerned for her daughter’s happiness.

When and where were you the happiest?
Now. Happiness is a choice.

What is your idea of hell on earth?
I think that that is also a state of mind, but to be specific, it would be not being able to express love or art. I can’t fathom it. Being stuck in a cubicle from nine to five would be a close second.

What is your greatest fear?
Fear is the opposite of love. I try not to think about it. We are not given much time in this life—focus on the joy.

Which talent do you most wish you had?
I would want to be a better dancer. I’m working on it. I never had the comfort or confidence with my body when I was younger to really do what I wanted—I always felt clumsy and insecure. We’ll see what happens. I’m not expecting miracles, no delusions of grandeur, but I think just working to improve is a start.

What superpower do you most wish you had?
Ha! Either flying or the ability to blink and wrinkle my nose a la “I Dream of Jeannie,” and get everything done!

What would you change about your appearance?
It changes, if that makes any sense. The older I get, the less it bothers me. (Whatever I feel the issue may be, mostly it’s my metabolism, which some days I feel has gone on hiatus.) I just tell myself that Elizabeth Taylor went through the same thing, so I’m in good company.

What trait do you most dislike in others?
Dishonesty. Deception. Sadly, I see and hear about it way too often.

What do you most value in your friends?
Kindness and compassion. Loyalty, meaning they won’t throw you under the bus at the first sign of trouble. My circle gets smaller every year. I think everyone’s does.

What quality do you most value in a good director?
Knowledge. A director needs to have a passion for what they are undertaking, and respect of what actors go through during the rehearsal process. Also, a friend once told me: unbridled ambition.

What is your guilty pleasure?
Designing Women and The Golden Girls. I’m somewhere between Blanche Devereaux and Julia Sugarbaker. Go figure that one out.

Who is your favorite fictional hero?
Alice Walker’s Celie. Any of the women from Dear Zari and all of the women from Kris Radish’s Elegant Gathering of White Snows. Just off the top of my head. There are many.

Who are your real-life heroes?
Julie Wilson, who just left us and I am still reeling—she was glamorous, kind, helpful, supportive—it was recently said that everyone in the cabaret world has a love story about Julie, and they were right. You could not find a more generous, lovely, and giving human being. She wore a gardenia as a tribute to Billie Holiday. I wear a gardenia as a tribute to her. Alexandra Billings, because she is a survivor, and hysterical, and wise. And my wife, S. Alexander Abel-Smith, because she is brilliant and strong and generous and never loses her cool. Finally, both of my children; Zoe because she is intelligent, witty, is an amazingly talented singer and actress and has a strong sense of self; and Alexander because he is unbelievably compassionate, excels at all things STEM as well as gymnastics – these are things that I could never do.

What do you consider to be the most overrated virtue?
Conformity.

On what occasion do you lie?
If it would be the kinder, gentler thing to do, I would consider distorting truth. But to outright lie does nothing for you or anyone else. Just own your damn truth—it’s one of the few things that is absolutely yours.

What was the subject of your last Google search?
Warning: literary geek alert. I was looking for the voice recording of T.S. Eliot’s “The Love Song of J. Alfred Prufrock.” I found it. Apparently it is available on iTunes…

If you come back in another life, what person or thing would you like to be?
Ask me again in 100 years, I’m sure the answer will never be the same.

What role, in which you will never be cast, is perfect for you?
The lead in a show about Mabel Mercer.

What is your motto?
“I don’t entirely approve of some of the things I have done, or am, or have been. But I’m me. God knows, I’m me.” (Elizabeth Taylor.) Also: “If you’re going through Hell, keep going.”