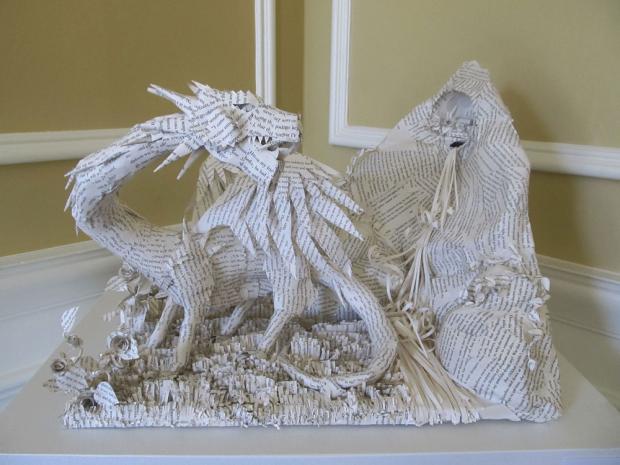 Superb artwork in paper and wood is currently on show at the Kenan Center in Lockport. The four artists are Diane Bond, Jodi Harvey-Brown, Doris Timkey, and Marie Prince.

Mostly sculptural art but with a decidedly Japoniste two-dimensionality quality in the work of Diane Bond. Characterized by uncannily complex paper folding and cutting. Origami squared, cubed, and sliced. The show title mentions scissors as a primary tool for these several artists, but this one is more likely to have worked with an X-acto knife. The pieces include elegant and understated wall-hangings of alternately same and differently patterned—with folds and slices—black paper squares suspended from twig horizontal rails—like miniature bamboo—to various art books. Some with the faintest suggestion of practicality—as storybooks, for instance—but for the most part leagues away from any idea of books in the traditional sense of text vehicles. Among non-book items is a piece called Micromanagement, with strands of film and microfilm. Another is a small Personal Reliquary, invoking spiritual gifts—or virtues—in English and Latin. Among the simpler and more straightforward works is a beautiful fold book with woodcut tarot figures and initial letters, and epigrammatic text from Voltaire on life as a card game: Each player must accept the cards life deals, but once they are in hand, he or she must decide how to play them, to win the game.

Paper artist Jodi Harvey-Brown’s tool of choice—in addition to scissors—seems to be a paper shredder. Out of paper that looks like it has encountered one, she makes sculptures, one of which, entitled Rose, looks more like a small garden plot of roses. A bouquet at least. Uncanny artwork, again. Again, one asks, how does the artist do it? Another, even more elaborate piece is called How to Build a Rose Garden. Not so much a garden as a flowery whole fantasy landscape, with central feature huge dragon with wings, against a mountain backdrop featuring a spring with fettucine-like shredder product paper water flowing from it, down the mountainside. Another work by this paper artist is basically papier-mâché. It is called The Little Prince and consists of a white globe and the little boy the pilot meets in the desert. One of the lessons the boy relates—that he has learned from the fox—is that it is the time and effort one spends on one’s rose that makes the rose significant.

The sculptor in wood among the artists is Doris Timkey. She makes human or animal figures of found wood or what looks like found wood—driftwood or tree branches or gnarly roots. Or essential elements of human figures—faces—that emerge from wood that retains its basic supposed original form, still looks like a tree branch or roots complex. Part folk art in the found wood aspect, but highly skillful sculpting in the figural parts, the faces that characteristically display enigmatic Etruscan smiles. One room of Timkey’s work is devoted to the theater—a marionette theater and dozen or so charmingly crafted foot-and-a-half-high marionettes, including stock characters from a era before political correctness, “Luna Tick” and “Chow Ming Lee,” and four principals of an escape from slavery drama—a fugitive slave woman, a Quaker couple, and a mean-looking lawman with badge and gun, no doubt on the trail of the fugitive woman. Another room is a veritable barnyard full of chickens and an oversize green frog. And on a shelf, an arthritic-looking piece of grapevine that the artist has fashioned into a Fantasy Animal that looks like a cross between a dodo and the Flub-a-dub. Two extinct species.

Marie Prince makes little framed collages about the presidents, one for each president, good or bad. Washington and Lincoln and FDR and Obama cheek by jowl with Nixon and Reagan and George W. Bush. Each assemblage contains some relevant pictures, including a reproduced photo or etched or painted portrait of the president, a reproduction (presumably) signature, a negotiable coin with the president’s image, if there is one, and if not usually a non-negotiable coin of the sort you see a magazine advertisement for a set of every so often. And usually a postage stamp with the president’s image. Most of them have a postage stamp, except the ones recent Congresses disdain to honor in any way, like Jimmy Carter and Bill Clinton—Obama shouldn’t hold his breath for a stamp—or would just like to forget, like George W. Bush. Washington has a five-cent stamp. Lincoln a four-cent stamp. James Madison a 34-cent stamp, and his popular wife Dolly a 15-cent stamp.

The title of the exhibit is Wood, Paper, Scissors. It continues through April 26 ath the Kenan Center.