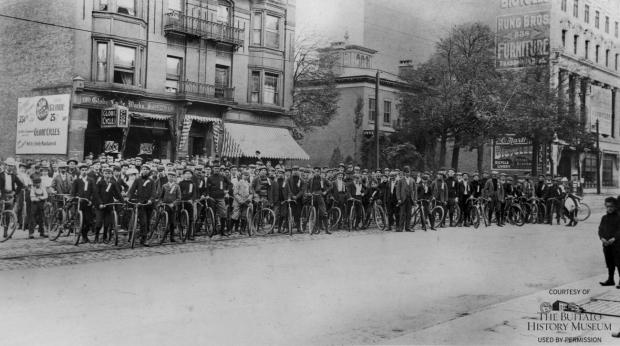 “Club runs are of weekly occurrence among Buffalo wheelmen; but something new in cycling trips, and a very pleasant novelty indeed, was the first annual country run given by the Globe Cycle Works. It took place last Sunday, and brought together one of the merriest and largest companies of bicyclers that ever left Buffalo for a day’s outing.” —Buffalo Express, 1896

The Globe Cycle Works first annual run took place on May 24, 1896, the date of this photograph. Here, hundreds of “wheelmen” line up at the Globe salesroom at 616 Main Street, ready to depart for the countryside. The run concluded in North Collins, where cyclists were treated to bicycle races, football, baseball, and other pastimes, all on the dime of Globe Cycle Works proprietors William H. Penseyres and Charles Haberer. The partners started manufacturing bicycles in a small shop in 1889, and by 1895 occupied a four-story factory at Broadway and Elm streets where Globe, Mascot, and P&H Special bicycles were made.

By 1900, the firm was one of 79 bicycle manufacturers in Buffalo, at a time when thousands of bicycle commuters crowded Main Street, Broadway, Genesee Street, and Delaware Avenue during peak travel times. By 1904, Globe Cycle Works was out of the bicycle business, a victim of the “bicycle bubble” of the Gay Nineties. Today, groups like GO Bike Buffalo and Slow Roll Buffalo are reviving an indigenous cycling tradition.