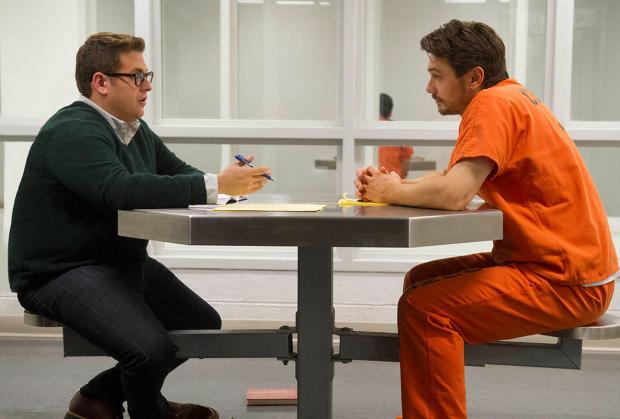 Anyone lured into True Story expecting a goofy comedy from the casting of stars James Franco and Jonah Hill will be disabused of that notion by the opening scene, in which a coroner opens a suitcase that has been fished out of the water near Portland, Oregon.

The suitcase contains the twisted body of one of four murder victims, a woman and her three young children. The suspected killer is the husband and father, Christian Longo (Franco). Shortly afterward he is apprehended in Mexico, where he has been using the name Michael Finkel.

It’s not an alias he chose at random. The real Michael Finkel (Hill) was a rising star at the New York Times, a journalist who had numerous magazine cover stories filed from around the globe. At the time of Longo’s arrest, Finkel had just been fired for fabricating a composite character from among five African child workers he had interviewed.

Adapted from Finkel’s memoir, True Story looks at the relationship between the two men. Intrigued by the accused killer’s use of his name (and unable to work anywhere else), Finkel meets with him in prison and agrees to write his story. Longo pours out his history in rambling, illustrated letters that fascinate the journalist, who feels the two of them are somehow connected. But is Finkel using Longo for a story that will get him back to work, or is Longo using Finkel to concoct some kind of defense?

This is a project tailor-made for David Fincher, but instead it was directed by Rupert Goold, an acclaimed British theater director making his film debut. He and his team do solid work keeping the movie from seeming stagey despite its focus on two characters talking to each other.

What he can’t quite overcome is the script’s determination not to go anywhere you’re expecting it to. Finkel’s fiancée Jill (Felicity Jones) watches his growing obsession with alarm, but never confronts him with her concerns as we’re expecting. Instead she visits Longo in prison to attack his machinations—an event that never actually happened. Lord knows I’ve complained a lot recently about “based on fact” stories that play fast and loose with the facts, but in a film like this you have to take a detail like that with a great deal of self-consciousness. We come away in the end learning only that truth is messy and often unknowable; whether you want to read that as an apologia for Finkel’s ethical lapse is an argument you can have long into the night.