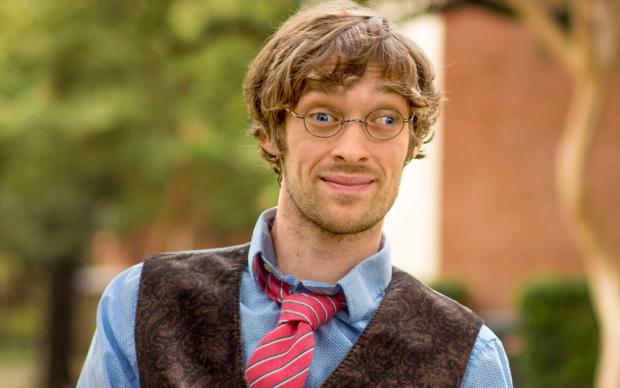 Zach Anner wants you to know something: It’s probably easier living with cerebral palsy than being a Bills fan. Zach knows he’ll never walk again, but the hope that the Bills may one day win the Super Bowl is almost too painful to contemplate. Cerebral palsy is, after all, “the sexisest of the palsies.”

The Kenmore native is something of a new media star, patching together a career on YouTube that propelled him into the national spotlight winning an Oprah Winfrey Show competition to start his own show in 2011. He’s a comic, a TV host, and, as Lena Dunham of Girls says, “He’s also a great fucking writer.” Last month, his first book—If at Birth You Don’t Succeed—was released and he’s embarked on a reading tour to anywhere that wants him, including so far Los Angeles, New York City, San Antonio, Houston, and Minnesota.

But more than a writer or a comic, Anner’s experiences have turned him into an optimist. Every Monday morning, he releases a short video to YouTube called “Top of the Monday” through Rainn Wilson’s media company SoulPancake. It’s an attempt at the lighter side of the news. Anner describes it as “a fun, breakfasty version of The Daily Show.” Even a negative review in his hometown Buffalo News couldn’t bring him down.

But more than a writer or a comic, Anner’s experiences have turned him into an optimist. Every Monday morning, he releases a short video to YouTube called “Top of the Monday” through Rainn Wilson’s media company SoulPancake. It’s an attempt at the lighter side of the news. Anner describes it as “a fun, breakfasty version of The Daily Show.  Even a negative review in his hometown Buffalo News couldn’t bring him down.

Zach spoke with The Public by phone this week to talk candidly—as if he knows another way—about his life and book, and how he built an education, a career, and a life after dropping out of high school.

People magazine calls you a comic, and you have a brand new book, but you moved to Austin to break into the video and television industry. Do you enjoy being hard to classify this way?

I do. There’s no through-line to my work other than the fact that I try to give a voice to people that may not have it by being silly. If I’m passionate about something, or, if I want to be ridiculous I’ll be ridiculous. If I want to do a show on world religions, I’ll do that too because it all comes from the same need to help people see broader perspectives. That’s the thing, I didn’t know if writing a book was the best thing [for me to do]. How do you balance the crude and vulgar humor with the heart and soul? I’m even confused by it sometimes. The lesson is that people are complex.

There’s a chapter about manscaping in the book and the horrible manscaping incident that I had. And I’m like, “If I’m going to write a chapter about shaving my balls, I better make sure that it’s emotionally valid to tell this story.” It’s called “With Apologies to Gene Shalit” because I call my unshaven undercarriage Gene Shalit. Really, there’s an emotional weight to the story. I didn’t lose my virginity until age 29 because I had all of these emotional walls up and I was so concerned about “No one’s gonna like me for me because of this body I have.” Because of the CP. And it was me doing this mindfuck on myself, and sabotaging myself because I didn’t feel I was worthy. So at that point I figured I could write this story that was on its surface about shaving my balls, and then put in this deeper truth.

You find out later in life that everyone has a complicated relationship with their body, right?

Yeah, everybody does. That’s the thing that people don’t get when they see the disability. Our struggles, if you don’t like the way you look for some reason, or you struggle with confidence, all those struggles are the same. Although mine are more apparent, we all go through that kind of stuff. In a way, I’m luck that mine are more on the surface. People know what I have to deal with, and what I try to say in the book is that we’re all in this together, we all go through the same things, so why don’t we talk about it a lot more and be proud of our own journeys.

An editor at your hometown paper here wrote a fairly negative review of your book, boiling it down to a statement that “It’s hard to escape the feeling that the main reason this book was written had more to do with his disability than his achievements.” What were your feelings about that?

It’s an incredibly dismissive statement. I don’t know what this guy was going through and I can’t really condemn him for his opinion but I also don’t know that he dealt with the themes of the book. I don’t want to be negative towards anyone, and maybe he was having a shitty day and maybe he didn’t like the book, but it was something that when we read it. I was with Gillian [Grassie] at the time, and we started laughing. If you’re going to write a scathing review, that is the one to write. I know that a lot of my friends and family will be reading this and they’ll be probably be outraged for me so I can just enjoy this moment.

There are universal themes that are independent of disability that are about the human struggle. I think what statements like that fail to consider is that whether or not you think I’ve achieved much in 31 years is kind of irrelevant, but I do know that I have perspective that’s worth sharing that a lot of people get a lot of meaning from it. I wouldn’t have told this story if didn’t think I had something to say. The notion that it’s cashing in on something I did five years ago is like, actually a lot has happened since that, dude.

Where does your optimism, your spirit come from?

My optimism? I mean I’ve a very lucky life. There’s no other way to look at it. I have incredible people in my life. Whether it’s Gillian Grassie, who I wrote the book with, or my amazing parents, or my brother, the people I work with in Austin, all my friends in Buffalo, it’s an amazing support team. I keep saying it, but I really am the sum of all the great people I’ve met and worked with in my life. I’m not always super optimistic and I go through things the way everyone else does, but at the end of the day, it’s hard not to be optimistic when there were times in your life when you weren’t sure if you’d be able to have a career and do the things you wanted to do, and you didn’t know if there was a place for you in the world, and you’ve not only found that but you’ve found a community and a fan base and way to make projects and be creative and do great stuff and put some positivity in the world. I’m very fortunate to be able to do that.