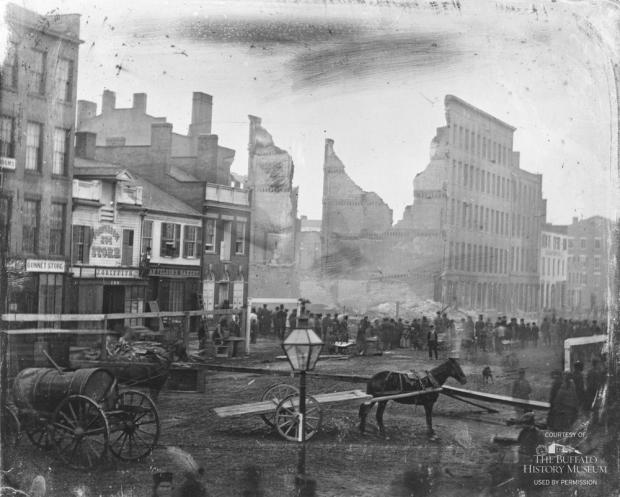 “The raging element was soon beyond the reach of the efforts made to subdue it, and the attention of the firemen was turned to the American, in an endeavor to save this noble structure—but in vain. The wind blew a gale, and it was intensely cold, which added fuel to the flames. Soon the roof of the American caught in an inaccessible point. The fire spread rapidly, and in a few minutes the dome was wrapped in flames, and not long after the entire roof of the main building was a sheet of liquid fire. It spread downwards and along the wing extending towards Pearl Street, until the whole building was on fire throughout, and amid the crackling of the flames and the falling of the walls, it presented a grand as well as melancholy spectacle. Ere long the whole was a mass of smoldering ruins, except the front wall which stood solitary and alone.” - Buffalo Commercial Advertiser, March 11, 1850

The American Hotel, on the west side of Main Street between Court and Eagle streets, was destroyed by fire on March 10, 1850. It was one of 99 buildings constructed by Benjamin Rathbun from 1835 to 1836, and five stories tall, of cut brown stones, and surmounted by a cupola. This daguerreotype of the American Hotel ruins, snapped by Donald McDonnell the morning after the fire, is the earliest known photograph ever taken of Buffalo. To the left of the hotel ruins, the Bonnet Store, J. Griffith provision store, and Van Velsor’s bakery are visible. To the right is the Globe Hotel, where the fire started, and the Eagle Tavern. Writing in 1837, Gideon Miner Davison wrote that the American Hotel was “probably not surpassed by any in the United States, either as to size, furniture, or the style in which it is kept.” Rebuilt, it burned again on January 25, 1865. The site is now occupied by the Main Place Mall.