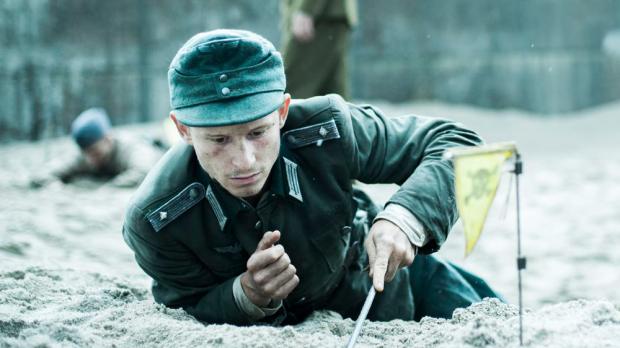 Land of Mine, a Danish nominee for the best foreign film Oscar, opens with a tight image of Roland Moller’s sharp-beaked, jut-jawed profile. Moller is playing Danish army sergeant Carl Rasmussen, sitting in a jeep as a forced march of weary dispirited young German prisoners of war go by him. We’re in the days after the end of the Second World War.

This immediate focus on the sergeant is germane because the movie is going to be about his reluctant personal journey to a kind of moral conversion, and a consequent drastic rebellion against authority, even as it presents a version of a little-known piece of postwar history. The German forces occupying Denmark mined the Danish coast with hundreds of thousands of land mines. After the war, the Danes imposed the dangerous and lengthy task of removing them on the barely trained German POWs, whose safety was of little or no concern to their captors. Of several thousand Germans compelled to defuse the mines, a little over half were killed or maimed. If this movie’s storyline is factually reliable, the Germans were also denied adequate food, lodging, and rest.

Sergeant Rasmussen is assigned to command a group of about 15 young captives billeted in a crude outbuilding on a coastal farm, where they’re half starved as they try to complete their terrifying task. We’re given virtually no backstory about him, but it’s apparent enough that he’s a hardened war veteran with a bitter hatred of Germans. In this telling, both Danish civilians and military consider the plight of the POWs to be rough but appropriate justice. In that initial scene, Rasmussen leaps from his jeep to confront a young German carrying a souvenir Danish flag and pummels him to the ground, bloody. He tells his young and frightened charges, “I don’t care if you die.” None of them seems more than a stripling. They’re probably all teenagers, conscripted near the end of Hitler’s murderous regime.

They’re depicted trying to keep up each other’s spirits in these grim circumstances as two almost inevitable narrative developments occur: Mines will be inadvertently detonated—as in one particularly harrowing scene—and Sergeant Rasmussen will begin to relent and try to protect these youngsters. Soon he’s irregularly procuring more rations for them and before long there are soccer games and footraces on a cleaned section of beach.

Writer-director Zandvliet portrays much of these activities with a naturalistic persuasiveness. Moller is appropriately fierce in the early scenes and just about brings off his avuncular change of heart. The transition seems abrupt, especially given his early cruelty, and Zandvliet has generally schematized his picture a little too starkly. Land of Mine is about reciprocal inhumanity and dire challenges to compassion and conscience, but it provides almost no realistic ambiguity. It effectively dramatizes a bleak episode in a terrible historical moment, but it’s a little overdetermined.