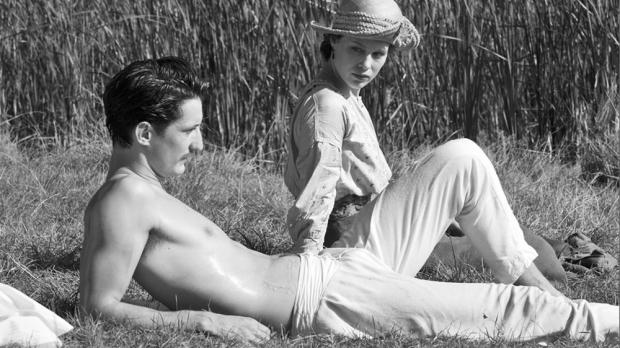 It must be something in the air, that two films opening this week (both at the Dipson Amherst Theater) share as a central theme that the German people suffered during the wars of the last century as much as those of any other country.

Land of Mine (reviewed on the adjoining page by my colleague George Sax) depicts a little known post-World War II chapter in which German POWs were forced to remove mines from Danish territory with little regard for their safety. From France, Frantz goes back to 1919, the year after the end of World War I, to explore the grief of a young German woman whose Francophile fiancé died in the trenches.

Anna (Paula Beer) lives in a small town that lost most of its sons to the war. She lives with the parents of Frantz, who regard her as a daughter since their death of their only son. Grief hangs heavily over the town, which is photographed in 35-millimeter black-and-white photography. It may be more attractive than the mood it wants to evoke, but there’s a limit in how much somberness the viewer wants to wallow in, even while watching characters who have settled in with their misery.

At the cemetery, Anna is surprised to see a stranger laying flowers by Frantz’s headstone. (The flowers are perched on an empty grave: Like many soldiers in that war, he was buried in a mass grave near the site of the battle where he died.) He is Adrien (Pierre Niney), who attracts attention not only for being young in a town where few men his age survived the war, but for being French and therefore, in the minds of the survivors, responsible for so much death.

Anna confronts him and gets him to share his story: He knew Frantz before the war, when they were both students in Paris and shared taste in music and art. She brings him to meet Frantz’s parents and, despite initial misgivings, they find comfort in this connection with their dead son. In the ensuing week Adrien and Anna grow close, but his reticence makes clear to us that he is not telling his hosts everything.

Adrien’s lie is revealed at about the halfway point of the film, but it is one of many that thread through this seemingly placid but complex and deeply felt film (loosely adapted from Broken Lullaby, a Ernst Lubitsch 1932 film that is memorable for being so unlike the sophisticated comedies for which that director is famed). In the political sense, wars are based on lies, as Frantz’s father realizes when he comes to regret the memory of how the men of his generation sent their sons off to die. But could we live without lies? Anna falls into one quite easily, and even the priest who hears her confession can’t bring himself to condemn it.

Directed by François Ozon, Frantz’s initial gloom is off putting, but the story captures you in surprising ways. With strong performances and a sure visual sense, he involves you in moral complexities that you won’t easily shake off.