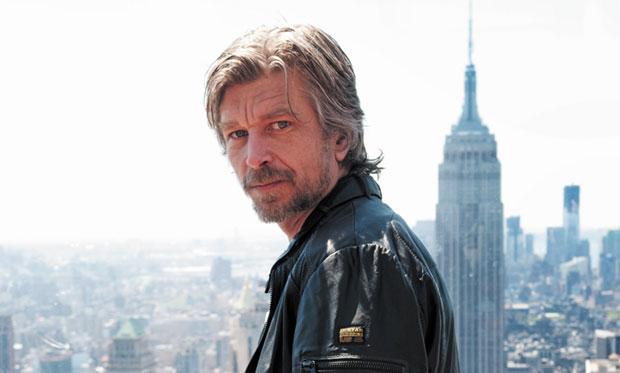 Much to his surprise, an experiment in self-reflection has launched Norwegian writer Karl Ove Knausgård to global prominence. The author of the wildly-acclaimed six-volume autobiographical saga My Struggle will speak in Buffalo at 8pm on Thursday, April 21, in Kleinhans Music Hall under the auspices of Just Buffalo Literary Center’s BABEL series. He’s never been here before, and he’s looking forward to it; having enjoyed previous trips to the United States, a “fascinating” and “very different” place. What is not so different is the theme of his work; specifically, for BABEL readers, in Book I, which ends with the death of his father. In it, Karl Ove, both character and author, struggles to deconstruct their relationship and answer the question of identity and place in a complex world. Today, for a man nearing the half-century mark, with a life story already detailed in six volumes, the question that begs is what next? What about the rest of your life, and writing career? In a recent telephone interview, from his current home in Sweden, Knausgård, thoughtful and bemused, gamely struggled to answer all our questions.

You have written many other books, but this is so deeply, painfully personal. Tell us about your writing process, and its cost.
It was a very long process. It was 1998 when my father died; he was found dead in my grandmother’s home. My first thought was I have to write about this. I had just published my first novel, but this was what I wanted to write for the next 10 years; really, I wanted to write about my father and me, and my experience. I tried it as a novel first, and then, in 2008, I tried to write it as a confessional. My publisher called the writing “manic self-confessional”—he didn’t like it. But I was just writing about myself being 16, for example, and connecting it to my father’s death. I used my own name; that kind of laid out the frame in which I could write about it. All of this, trying to evoke the feeling when I entered the house where my grandmother lived, and how that was…I had to say what I really thought, I had to be responsible. I had to be able to look people in the eyes afterward. The hardest part was to write about my brother, who is very generous, and accepted what I wrote. I did send the manuscript around before it was published. And my father’s family tried to stop the book, and threatened to sue me. They were upset at how my father was portrayed, and my grandmother. I was accused of many, many things. Who are you, they said, and is your story more important than our family? To which I reply who are you to say that I cannot write about my father? This was not a hate or revenge project in any way, rather a genuine quest for identity—who I am; who and how my father was.

There is a Biblical quality to your work, with its ancient themes of the human condition. Slogging through daily life and death, suffering and salvation. Do you try to teach through your writing?
No, because you are not free if you write with that goal in mind. My idea was not to care at all what I was writing; to never think of the reader at all…That is, I have been reading all my life and I see that the relationship is between two, the author and the reader, but what is the ultimate value of the work—I could never tell that myself. So I was very surprised by the way My Struggle has been received. I think so many things are constant, and the same for all of us. Everyone has a mother, for example, and a father. It is the same to be 16 in Buffalo as it is in Copenhagen. Perhaps I didn’t know before that what is true for me is true for others as well. Now I get letters, from all over. And it is gratifying; that is the best thing for a writer, to know you have reached people. But there are problems, too, like meeting people who think they have a connection with me, and they are complete strangers…They may have expectations of you, and what you should be writing.

In Book I, Karl Ove rents a quiet office in which to write, but still seems to draw energy from the urban bustle around him. Is that your modus operandi?
I have my own little house on our property where I am by myself to write. When I was younger I really believed in solitude; I actually went to an island by myself to work. And now I see I have never written as much as I have since I’ve had children…Writing is about life, and so it is good to be close to life. You cannot control everything if you have children! Distraction is good, but you need concentration as well. But this is not an effort if you want to do it—it has nothing to do with self-discipline, for me anyway.

Your landscape descriptions are poetic and expansive. Is this part of your heritage? And how is that a book so place-specific is universally appealing—translated now into 15 languages?
I don’t know if there is anything cultural here—I have always been attracted to nature in writing. And I need to recreate spaces around me, including interior rooms, to tell a story. That is why I am so preoccupied with landscape. In my book I try to make physical surroundings visible…And why so many have read my books; I really don’t know. They are so private, so personal, and it was kind of an experiment to write them…I was shocked there was so much attention; it was surreal. I thought this was only a thing in Norway, but that was not the case. The books evoke their own memories—that is what people tell me.

And so, next up?
I thought I would never write about myself again, but I am in the middle of a four-book project. This is not about my inner turmoil and problems…they are about objects, and my daughter, before she was born, and then at three months old. They are illustrated with original paintings from Scandinavian artists. The books are named for the seasons—first two, Autumn and Winter, are already out in Norway. Spring will be out next; I still have to write Summer, but I’ll do that soon…but I am longing to write a novel; I am fed up with writing about myself. So we will see.