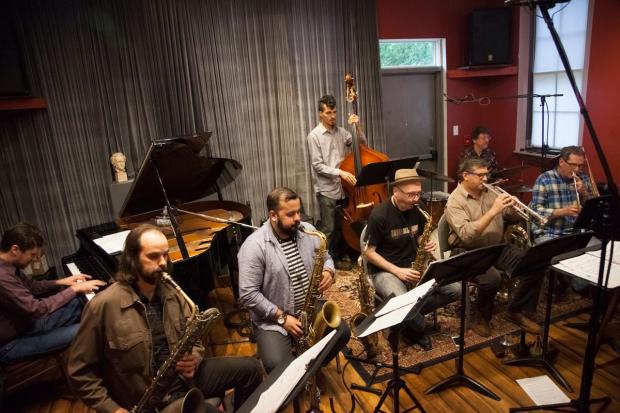 Recording and releasing an album is the dream of most bands, regardless of what style of music they play. Even in our world of web-based streaming services, the physical album remains the standard embodiment of a group’s commitment to its craft.

In jazz, a new CD doesn’t generate the same buzz surrounding releases by pop flavors of the month, but it is still a calling card of musical purpose. At 7pm on Thursday, April 20, the Buffalo Jazz Octet will celebrate the release of its first CD by returning to Pausa Art House on Wadsworth Street in Buffalo, the lively room where its aptly titled disc, PausaLive, was captured over two nights in May 2016. Admission is  $10.

In roughly one hour of exhilarating music, PausaLive—released by Cadence Jazz Records (cadencejazzrecords.com)—both reinforces and obliterates notions of jazz as a convenient label. The sound is clean, the song structures are sublime, and the musicians’ seamless mix of top-notch inside and outside playing defines an assertive group presence. The album is striking in its dynamic variances, pulling you into an aural adventure from the very beginning to the final breathy notes. This record gives a stirring voice to pure creative elements of musical endeavor, and should put the octet on a much bigger map.

The band members—founder/pianist Michael McNeill, trumpeter Tim Clarke, trombonist Phil Sims, Kelly Bucheger on alto and tenor saxes, Nelson Rivera on tenor and soprano saxes, Steve Baczkowski on baritone sax and his “didja-tube,” (a do-it-yourself didgeridoo), bassist Brian DeJesus, and percussionist John Bacon Jr.—are proven virtuosos, and most are also adventurous composers and arrangers. But aside from credentials and instrumentation, this is not a normal jazz band. (Technically, it’s not even an octet; there are nine members, with Brendan Fitzgerald serving as a very active conductor.) Sure, the octet swings, and they play clever melodies and improvised solos. But there is much more going on here.

The group has no qualms about forays beyond traditional harmony and rhythm as a natural evolution of its material. “I don’t think that we’re trying to be far-out or avant garde,” said Bacon. “It’s a progression of what’s in the music. There are a lot of situations where the box is tighter. I love playing in those settings too—I know exactly where the boundaries are, and I can push on those. In the octet, those boundaries are much wider, so sometimes you can be way out there and suddenly you’re at the edge of the forest. It’s new territory.”

The Buffalo Jazz Octet debuted in December 2011. McNeill was experimenting with adding horn parts to tunes he had written for his trio. At the time, McNeill saw the first octet concert as a one-time event, due to the difficulty of scheduling rehearsals with busy musicians, and finding gigs—never easy in the jazz world, especially for bands not devoted to the standard repertoire. Now, with the CD coming out, the release concert at Pausa on April 20, and the opening slot on the main stage at the Northwest Jazz Festival in Lewiston on August 25, the band members I spoke to agreed that the octet has a real future. There are tunes that didn’t get onto the CD, more music being written, and new paths to explore.

Trails are blazed from the CD’s opening song, Bacon’s “Sculptured.” It starts with a unison ensemble melody, but 30 seconds in, it takes a turn that evolves into a boundless collective improvisation. Right off, jazz devotees will want to liken the octet to other ensembles, and there are certainly comparisons to be made. But this group is planting its own flag, quilted from myriad and overlapping patches of experience into a nuanced sound, an original conception that projects toward a future rather than reflecting on the past.

“The great thing about the octet is that anybody in the group, at any point in time, can make a musical decision that can potentially challenge everyone else’s whole belief system,” Bacon said. “You might say to yourself, ‘Wow, okay, I didn’t see things going there, but what do I do to go with that and try to stay in that same universe?’ That is a really cool thing for a musician.”

“There’s the intricacy and power of a large ensemble with the flexibility of a small combo,” said McNeill, the founder and guiding spirit of the octet. The players’ diversity helps bring out “things that you might not necessarily expect in a jazz context.” He noted that none of the tunes on PausaLive were written specifically for this group, but were arranged for the band with a mind toward making the band sound larger than the sum of its parts. There is a great deal of superb writing on this record, yet nothing about this music is static.

Two tracks on the album, “traffic.tactic” and “Tracheal Rubric,” are credited to Fitzgerald and the octet because they are completely improvised pieces—nothing is written. The conductor guides individuals and sub-groups of the band with subtle cues to evoke melody, harmony, counter-melodies, and rhythmic changes, relying on the musicians’ expert ears and technical facility to create the tunes. Based on the “conduction” approach of the late Butch Morris, Fitzgerald and the band have formed an evolving language that allows songs to grow out of the ether. Both live and on the CD, these are the pieces that define the octet’s ethic.

Clarke opens “traffic.tactic” with a show of bravura, producing sounds most trumpet players can’t make. The saxes enter, contributing a lush underpinning while McNeill dances over them, until deft interplay from Rivera and Bucheger welcomes the rest of the band to respond, with notable input from Sims and Baczkowski. “Tracheal Rubric” closes the disc, but after mesmerizing turns from Baczkowski on his didja-tube and baritone sax, and the way the band complements his flights of freedom, you wonder where else the band can go. Fitzgerald knows that there is a lot of territory yet to explore.

“I keep listening, and use what is created to help the guys develop new paths,” Fitzgerald said. “Sometimes it’s about how to play against what you hear. If it gets into something that they like, they can try to continue to develop that, but it requires communication. It’s a lot of active listening to help shape the progression of each performance. It can always go in new directions.”

For example, dig another of Bacon’s compositions, “Homeage.” Rivera and Sims alternate on the main theme, buoyed by classic big band-style punches, until Baczkowski, on baritone sax, and DeJesus, on bass, combine to briefly establish the tune’s bottom. Suddenly, Bacon tags out the bass and enters into a fiery duet of sonic invention. You don’t understand the baritone sax and its capabilities until you’ve heard Baczkowski play it, preferably in person. From fat, gorgeous notes to wailing, fluttering sounds that don’t exist on any sheet music, his exploratory intensity is at the heart of what makes the Buffalo Jazz Octet unique and wonderful. Bacon expertly matches the passion, and rather than wither from the heat, the others offer smart interplay throughout before a slowly building crescendo ends the tune.

“There are different approaches to improvisation,” Bacon said. “Everybody’s got the same end goal, but how everybody goes into it is a little different…When we’re playing, I don’t think anybody in the band goes into this saying, ‘This is my thing and I’m going to take over now.’”

“Second the Motian,” a tribute to late drummer Paul Motian and one of McNeill’s two compositions on the record, continuously evolves in sound and tempo. The rhythm section matches the force of solos from Baczkowski and Rivera, then everything slows into a pensive dialog between Clarke and McNeill before revving back up alongside statements from DeJesus and Bacon. Each player’s feature is accented by inventive ensemble passages, and the transitions between solos are marked by a driving call-and-response figure. McNeill’s “What Are the 39 Steps?” presents the most intricate writing on the disc. The sauntering themes in complex time imply a dark night in a quiet old city, but again, there is vast space for improvisation as the band works inside and outside the structure to go, seemingly, from Vienna to Venus and back.

“I write and play a lot of different kinds of music—at any moment, there is the possibility of any of those styles happening,” McNeill said. He and Bacon both talked of how the octet and its music defy category for people trying to pigeonhole its output. The group is informed by the entire sum of jazz history, with numerous other influences that shape the music’s wide lateral development.

The CD was conceived as a tool to present to promoters, the public, and even the band members to demonstrate its musical staying power. McNeill, who has the most trouble making rehearsals, having relocated to Texas and then Virginia, sees potential for the octet in new contexts, including local gigs, regional tours and—thinking big—international festivals. The economics might be dicey, but musical vision can go far in making those dreams a reality. It’s hoped that being able to present this album will open some doors.

“There is still a lot of upside to the band,” Bacon said. “We’re hitting our teen years as a group. We’ve gotten past the early stage, but now we’re at a point where I think we can focus on really growing on that potential and exploring new music and new ways to go within this context.”

Fitzgerald and McNeill are in Wooden Cities, a prominent local new music ensemble, and Fitzgerald often spoke with audience members to allay uncertainties. “People would say, ‘I don’t necessarily understand what you’re doing or what’s going on,’ and that’s usually where I would interrupt them and say, ‘You understand exactly everything about this music because it engaged you and it got you to try something.’ That is so important, to engage people in what you’re creating…The octet is very similar in that way.”