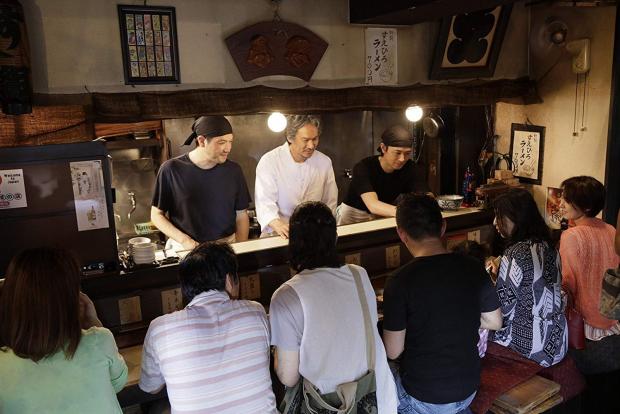 In recent years, the North Park Theater has become a showplace for Japanese cinema, especially anime, so it was probably a no-brainer for them to book a movie called Ramen Shop. After all, what could be more Japanese than a bowl of ramen noodles?

Quite a lot of things, as I learned from watching the movie. The wheat noodles actually originated in China, booming in popularity in Japan after World War II when US government shipped large amounts of wheat flour to deal with food shortages.

And while the Japanese cinema is rife with stories of young chefs struggling to learn perfect ramen techniques (one of thee, the venerable Tampopo, was revived at the North Park a few years ago), Masato, the hero of Ramen Shop, does something unthinkable for that genre: He leaves Japan for Singapore. That’s where his father met his mother, and he wants to track down the parts of their history that are unknown to him—his mom died young, and his father seldom spoke to him about anything other than the ramen the two prepared at their restaurant.

Delving into national as well as family history, he learns that the two countries have wounds that have not entirely healed since the Japanese occupation of Singapore. He also learns that food is the cure for—well, just about everything.

The plot of Ramen Shop is not what you would call surprising, nor is it handled with the equivalent of a knife edge sharp enough to cut dough. You could take your grandmother to see it (and probably should—she’d be guaranteed to make you a nice meal afterward, or at least buy you one). But as food porn, it can’t be beat. The name of Gordon Ramsey is invoked at least once, and you know he would approve of the movie’s attitude toward cross-pollination of cuisines. You will learn more about Singaporean street food than ramen, sometimes in such detail that you’ll wish you had brought a notebook (I leaned that one should always use Calamansi juice instead of rice vinegar for chicken rice sauce).

The opening night show comes with the opportunity at 6:30pm to enjoy a bowl before the movie courtesy of Sato Ramen—a $30 ticket includes ramen, a fountain drink, and your ticket. If you don’t partake but as the movie progresses wish you had, I’ll save you the trouble of looking it up: The Main Street location of Sato is open until 10pm.

One reason I can’t imagine ever leaving Buffalo, where I was born, is because I look forward to so much of its architectural history being rediscovered and restored. Most exciting of these are the buildings fallen into near-ruin that we’ve overlooked until someone put the time and energy into restoring them.

Premiering this weekend on WNED-TV, the 30-minute documentary “Reimagining a Buffalo Landmark” introduces most of us to one of the city’s most spectacular sites, the Richardson Olmsted Campus. I say “introduce” because, while we’ve all noticed the easily visible Richardson Towers, how many of us knew that those are only the centerpiece of a sprawling development of 11 buildings on a green site that once took up 200 acres?

Even if you’ve been to visit the Hotel Henry that is the first step in the campus’s rebirth, you may not have gained a sense of the scope of the project that was once the Buffalo State Asylum for the Insane. You also may not know that behind that Bedlam-esque name was a treatment facility that was far ahead of its time in regarding mental illness as something amenable to care and understanding. The documentary is eye-opening about all of this, combining a history of both facility and grounds with aerial photography that provides some astonishing perspective on an architectural masterpiece that, like the Darwin Martin House, escaped our attention for far too long.

“Reimagining a Buffalo Landmark” will air on WNED-TV Friday April 12 at 9pm, and again on Saturday at 4:30am and 6:30pm, and Sunday at 3:30pm. As of this writing, tickets are still available for a free event at 5:30pm on Thursday, April 11, that includes a preview screening of the program and a question-and-answer session with members of the program’s production team and representatives from the Richardson Olmsted Campus. To register for the event, visit EventBrite.com.