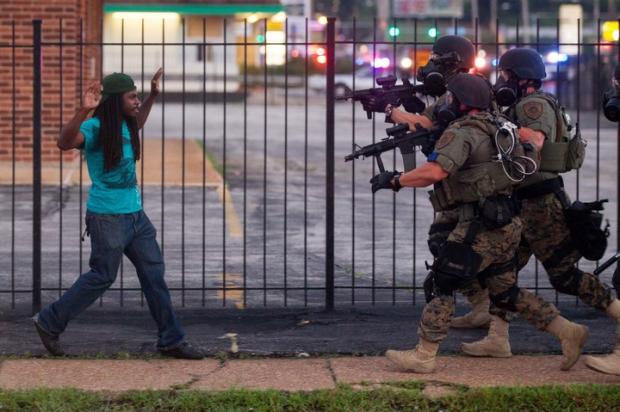 “The security we profess to seek in foreign adventures we will lose in our decaying cities.” Martin Luther King Jr. spoke this truth in 1967, in his opposition of the Vietnam War and the military industrial complex. This April, of course, marked the 50th anniversary of MLK’s murder. In the 50 years that passed, the military industrial complex—the war profiteers and the chicken hawks who feed them an endless list of usually poor and brown nation states to conquer—have grown in magnitude and power. At the same time, the multi-billion dollar weapons systems collectively punish and terrorize the poorest and most exploited people on the planet. And some Americans are increasingly finding themselves gripped with fear and terror at home.

Black Americans, myself included, have often been at the epicenter of domestic wars waged by the United States government against its own. The War on Drugs, which gives the government sweeping powers to target and harass black and brown youth. The War on Crime and the War on Gangs similarly act as a way to further criminalize black youth and destabilize communities of color as a whole. These wars on poor communities are so old and so entrenched in American culture we barely even question them. It’s always been normal to see a line of scared young men with their faces to the concrete while cops order them about at gunpoint.

To this day, I still remember walking home from school and watching as the older boys in my neighborhood were being “stretched.” The police pen you up against a wall and put a gun to your head, that simple. To this day, I remember every time I was stretched, penned against a wall with a gun to my head. Throughout my formative years growing up in the Kensington-Bailey area, I was always either a direct victim or witness to the police and the sweeping powers they had over my friends and loved ones. Around that same time, the 43rd president of the United States was on TV flying in a fighter jet and proclaiming “Mission Accomplished” to a nation of poor people living paycheck to paycheck. While my community was being drained of wealth and the inhabitants starved for any type of freedom and self-determination, there was Bush and the neo-conservatives of America proudly proclaiming their dominance over the Iraqi people.

This recurring theme of US imperialism throughout the planet in search of the usual—cheap labor, raw materials, and new markets—and the decaying society of violence and punishment at home is exactly what MLK meant when he said the bombs abroad explode at home. A government that green lights collective punishment of civilians and calls it collateral damage is an inhumane government. Any government that kidnaps people all over the world and calls it extra rendition is a dysfunctional government. In almost two decades of the War on Terror, the US government has murdered, kidnaped, tortured, and humiliated peoples in almost every corner of the world. Yet Americans, average Americans regardless of race, have not seen any benefit to this bloodletting and fury. In fact, it’s just the opposite. Americans are poorer than we’ve been since the debacle in Vietnam that MLK spoke out against. While the roads and bridges crumble, the water becomes tainted and sullied, as homelessness reaches epic proportions throughout the country (especially in sprawling and seemingly wealthier cities like Los Angeles and Seattle), and as the police are given more weapons (now leftover military-grade weapons from the various foreign adventures the US has conducted) and more powers over the masses of people; it is safe to say that the empire is burning.

At this point in time the society around us has degenerated and collapsed so viciously that besides the rich and connected, everyone is affected. The contractions between poor communities of color and their well-to-do and often white counterparts are narrowing. This isn’t to say that black and brown people are doing slightly better than our grandparents—by all quantifiable measures we are not—but instead to point out the failure of the United States war economy to provide any standard of living for even the most privileged in society.

The poor and deprived people of America are being starved out by a war economy. Out of this frustration at this decaying society and the dissatisfaction it produces amongst the people; the powerful, knowing nothing but the hammer, are once again gearing up for another war on American families and our rights and dignities. More police powers from the militarization of the Southern border, the expansion of prison-like conditions in schools and other public spaces, and of course the ever-widening dragnet of the state surveillance apparatus is the only solution that a war government feeding a war economy has.

People are tired of that. People are sick of waving flags and cheerleading for the US while it lashes out at the world with guns and bombs, playing the simultaneous role of world cop and resource robber. What have I gained from the United States having over 700 military bases around the world? What pride does it bring you to see Trump in meetings with the Saudi government playing the role of salesman for weapons manufacturers? Meanwhile, a quarter of the children right here in the Nickel City are going to go to bed hungry on whatever night you get a chance to read this.

The only way for us to get a grip on this burning house we’re all sleeping in is to wake up! The US has been at war with either itself or some strange ‘other’ for the vast majority of my time on this earth. At the same time, I’m working poor and don’t know anyone who isn’t. I’m not standing for this any longer and you shouldn’t either.

END THE US WARS AT HOME AND ABROAD NOW!!
Demonstration on April 15th @ 2pm
Starting at Niagara Square and marching to Naval Park