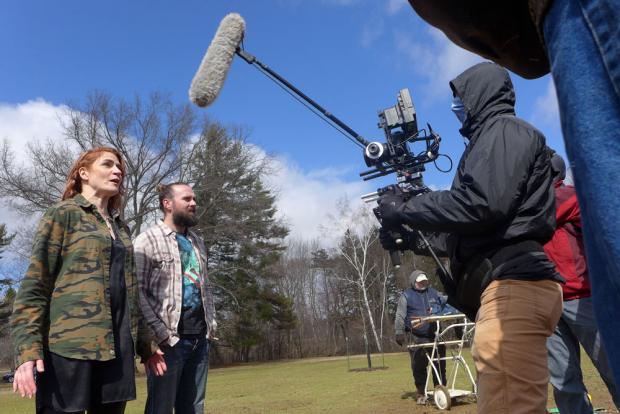 Social media blasted the news this past week that a pilot for a television show has been filming at various locations in and around Buffalo; Silo City, Knox Farm State Park, and the raucous Dyngus Day parade on the east side among them. Why I Murdered My Roommate, co-created/produced by Buffalo native and actress Tilke Hill and Michael Pauly of L.A., centers on the character EZ, played by Hill. It’s an ultra-convoluted story of a Polish-American bad-ass hippie chick performance artist on the lam.

Hill, who played a tarot card reader in artist Sarah Baker’s residency project soap opera (Our Time) for Hallwalls, moved back to Buffalo in 2010 for medical reasons. Upon her return she fell in love with the city, which she says she left behind for the west coast, never planning on a return engagement.

Why I Murdered My Roommate, when The Public catches up with cast and crew, is filming a scene alongside an old tree being saved by earthy types. This is Knox Farm and the temperature has dropped into the low 30’s so between takes the cast is wrapped in mud-spattered blankets. There are two camps in this portion of the story, “snail people versus tree people,” all are protesting the encroachment of development “on our shelled friends”—and more.

A gang of vegan activists rally. Leads EZ and Franklin, played by Tate Ammons, are impassioned, yelling for peace. It should be noted that, despite having been in Buffalo for over a week, Ammons bemoans that he has yet to try a single chicken wing. Makeup artist Cassandra Lyons, working on character Lush (Nicolle Dionne) nearby, overhears and proclaims “Bar Bill Tavern is only down the road.”

Mike Kawa, production manager and holding a thick green binder with notes (“You’re nothing until you’re in my binder”), also oversees the show’s Facebook page with photographer Lukia Costello. Kawa, from Depew, is part of the Buffalo Niagara International Film Festival and reports that in “2014 Hill’s independent horror film Elizabeth Bathory was voted the best western New York film, over 140 entries.” This year’s festival runs from April 10-18.

A crowd-funding campaign for WIMMR is running via Indiegogo and at the time of this writing was at 56 percent of their goal. Hill runs through the plot on a video on the page, also previewing some of her alter-egos/disguises. The production has been looping Vine videos, using Twitter (@WIMMR_Universe), and Facebook sharing progress in funding and filming: the show will be further using interactive, trans-media with a planned video game and comic book.

“This dark comedy will be sold for new content on platforms like Netflix, Amazon Prime or the new Vimeo,” Hill says. “EZ is tech-savvy and, through flashbacks, tells her story about what led up to the murder of her roommate—we’ve all had a roommate that we’ve wanted to kill.

“I’m loving what Buffalo has to offer for locations and want creatives who make movies and t.v. shows to see them. We’ll be done editing by the end of August and will present the show at American Film Market in Santa Monica to distributors, producers, and investors. It’s a round robin and you pitch to different people, it’s like speed-dating with potential investors.

“There are so many opportunities bubbling on the surface. This project has so many really complex, hilarious female characters and it’s almost like a vertical of how Buffalo is right now. It all has the potential to be something really amazing.”