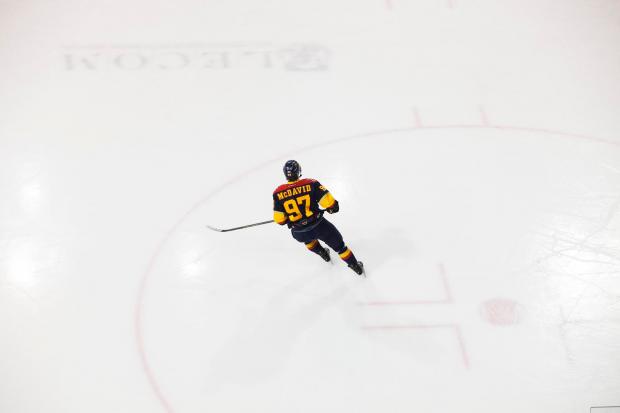 When we say a team controls its own destiny in sports, we’re usually talking about winning. Like 99.99 percent of the time. Welcome to .01 percent Sabres fans.

The Sabres control their own fetid destiny and they damn well better finish the job by losing just one more game. As much as athletes and media alike love to invoke the false truism of “whoever wants in more” in relation to honest competition, no one can win by sheer will.

But they can certainly lose. In fact, you could argue that’s what these past two seasons for the Sabres have been all about: losing spectacularly and with consistency.

Now they need one more to clinch drafting no worse than #2 overall for get Jack Eichel with a 20% shot at #1 where Connor McDavid will be drafted. Both are franchise players at middle-ice; centers who have launched a hundred losses.

The Sabres have been determined to lose these past two years with this exact scenario in mind, and there’s no reason—not integrity, not pride, not fear of embarrassment—that they should foul this up.

They are this close: A regulation loss in either of their final two games OR a win by the Arizona Coyotes in their final gameseals the deal.

They need to lose and they need to do it in Columbus on Friday night and all options should be on the table. Usually, when I’m talking about a Buffalo team committing a particularly creative, if not altogether masterful, loss, I’m talking about the Bills. In this case I give Tim Murray full reign to paint his masterpiece. My humble suggestions:

It grieves me to write this, but these past two seasons have hardened me and this is not a moment for soft hearts. Nolan deserves better than the Regier express to hockey hell he punched his ticket on, but he’s being paid well and this is certainly nothing personal. Come up with a reason to discipline him or just blame Dominik Hasek. Come up with something. We cannot have Nolan grinding his ax against the franchise that ran his friend Pat LaFontaine out of town and looks to replace him before the draft, in the spirit of winning. We’ll make it up to him by building him a statue on Canalside.

Does Ryan Vinz still work for the Sabres? The former video scout and college walk-on goalie suited up for the Sabres last year to backup Jhonas Enroth after Ryan Miller was traded to St. Louis. Most Sabres fans are curious to see what the man could do between the pipes facing the team’s customary 40+ shots against. The guy deserves a shot. If the Sabres somehow screw this up, Ted Nolan’s riding of the hot Anders Lindback will live in Norwoodesque infamy. Why is he even allowed to keep putting Lindback in net?

Along the lines of option #1, not as insulting to Nolan personally but egregiously more insulting to the sport of hockey. Let the guy who admits about McDavid “I watch him too much and I think too much about him” coach the damn team into Connorland. Play the fourth line on offensive zone faceoffs and keep them out there for double shifts. Pull the goalie for the entire third period, hell, play the entire game 6 on 5 and explain that you’re just “trying to give the young guys a shot to prove something.”

#4 Forfeit the game to Columbus

I mean it. Don’t even go there. Let Pegula lock them in HarborCenter with a few dozen Tim Hortons and then just confiscate their phones, shut the power down, and feed them hallucinogenic mushrooms. A nice long drug trip in the house Pegula built would really reset the club’s perspective, man.

#4a Or hell, slip them hallucinogenic mushroom tea in their water bottles for the game in Columbus and let them skate around like dragons.

#5 Give the Blue Jackets some great “corkboard material.”

Insult the town, the mascot, the players, the coaches. Get Lindy Ruff to call them “a joke.” Columbus has won 9 of its last 10, let’s make sure they don’t look at the Sabres as a “let-down game.” Let’s make fun of their mothers and their pets. Let’s challenge their staid philosophies about winning and over-masculinized domination. Let the Sabres change their Twitter avatar to a Michigan logo for the day.

#6 On the way to Columbus, make a team visit to Lily Dale

If ever a team was in need of counseling as to their fate, if ever a group of people were so confused how their role in one game could affect history, it’s your 2014-15 Buffalo Sabres. Let’s get a medium to open the doors for these guys and let the a little fresh air in, if you know what I mean. Losing one game intentionally will not undo a career in the pursuit of mediocrity excellence.

We all know Western New York is a tight-knit community. We need to band together today to make this happen.