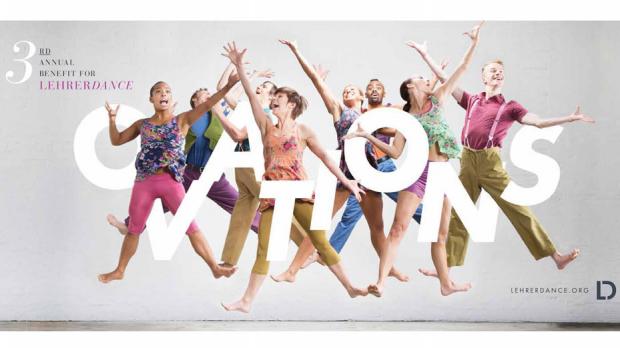 LehrerDance, one of Buffalo’s most prestigious dance companies, invites the community to attend their third annual benefit, which is being held at Salvatore’s Italian Gardens in Depew on Friday, April 17 at 6:30 p.m.

The benefit, appropriately named “LehrerDance Ovations 2015,” is an opportunity for the ensemble, which has been in operation since 2007, to raise money and awareness to help fund their upcoming season of dance. While the event is meant to honor the company’s past achievements and reassure their attainment of future goals, it also gives artistic director Jon Lehrer and his dancers a chance to come together to thank all their fans for their ongoing generosity and support.

“Every year it gets bigger and we want to make it one of those yearly events for people to come that already know us and for them to bring people who may have never seen LehrerDance before,” Lehrer said.

The evening features dinner and an open bar with live classic jazz music provided by The Fredtown Stompers. Guests can also participate in a variety of auctions, including themed baskets, grab & go wine, and silent and live auctions. At some point throughout the evening the audience will be treated to an up close and personal performance from the company as well.

“People will get to meet and mingle with the dancers and myself and really get to know us,” Lehrer said. “We want the people of Buffalo to feel like they know us, not just see us on stage.”

Tickets for the event are priced at $100 each and must be purchased by Monday, April 12. They can be purchased by mailing a check to LehrerDance at 59 Shoshone St. Buffalo, NY 14214 or by credit card on Lehrerdance.org.

“We had a couple dancers retire, so we kind of have this new energy from these young dancers who are fresh out of college,” Lehrer said. “Everybody is all in this together for the same reason and that’s all I could hope for, that any year I have a group of eight dancers that really want to be there and give me 100% at all times.”

Cavallo, 22, who graduated in May from the University of Buffalo, was ecstatic to join the troupe. Having been exposed to Lehrer’s work all throughout college, in the form of master classes and summer intensives, she already had a base to build off of and now continues to add to her prior knowledge.

LehrerDance’s definitive style is described as a fusion of modern dance, jazz and ballet elements, which he often refers to as “organic athleticism.” Each dancer in the company specializes in their own style of dance, bringing a burst of artistic diversity to the mix, which results in dynamic and memorable performances.

“It’s extremely physical in a way that’s very human,” Cavallo said. “We’re never trying to force something on our bodies if it doesn’t feel natural. Everything comes from a very organic place, but on stage it looks totally superhuman.”

The company will be sharing some of their captivating repertory at their annual summer intensive being held at the University of Buffalo Center for the Arts from June 1 to 6. This program is for pre-professional dancers, 18 and over, who want to challenge themselves by learning Lehrer’s technique, style and choreography over the course of a week. On the final day all participants in the intensive will be performing in a showcase, open to the public, followed by a reception.

While this intensive is an exceptional opportunity for young dancers to shine, it also gives Lehrer the ability to scout out new talent to potentially bring in to his company. Many of the dancers in the company now, such as Cavallo, were found through these intensives.

“He has such a clear vision for what he wants,” Cavallo said. “He’s totally honed in on exactly what he likes, what he wants and what he envisions for his company and for himself and for his dancers. I think that’s essential in any business.”

While Lehrer is straightforward about what he wants from his dancers, he also leaves a bit of room for experimentation, especially when it comes to collaborating with interesting spaces.

The company will showcase their ability to break away from the stage with their own interactive show, “LehrerDance Invades the Burchfield Penney,” on Saturday, April 11 from 2 to 4 p.m. The dancers will be strewn about the Burchfield Penney Art Center waiting to perform in small groups as Lehrer leads spectators around to different areas of the gallery. Upon approaching each group, live music will commence as the dancers begin to perform excerpts from the company’s repertoire. This performance will be free with gallery admission.

For other chances to see LehrerDance this summer, catch them at the M&T Plaza Events Series in June, a full concert at the Chautauqua Amphitheater in August and the 2015 Elmwood Arts Festival.