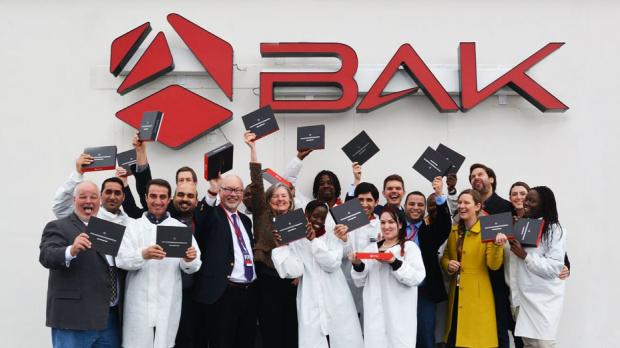 From the corner of Washington and Clinton Streets, you can see the future.

Bak USA recently illuminated their new corporate signage on the Compass East Building (formerly the Sheehan Memorial Hospital) on Michigan Avenue and it looks beautiful after dark—a very tangible symbol of what is happening in the tech sector right now in Buffalo.

And what is happening right now in Buffalo is tablet manufacturing on the near-East Side.

On a recent tour of their facilities, Danish founders JP, Ulla, and Christian Bak concurred that Buffalo was the perfect choice for their new American manufacturing venture, winning out over competitors like Detroit, Pittsburgh, and Albany (who lobbied hard for this particular corporation to be headquartered in Tech Valley). Factors that influenced their decision were proximity to the Canadian market and the cachet that New York could lend to its operations (and, ultimately, to sales, both domestically and abroad). Also integral were resources and tax incentives provided by Buffalo Niagara Enterprise and START-UP NY, respectively.

The Baks truly believe in the story of Buffalo (JP is well-versed in, and incredibly enamored with, the city’s manufacturing history) and are actively investing in its future in several unique ways. Foremost is how the company manages its production floor. Rather than working on an assembly line, each operator is trained to build a tablet from start-to-finish. And, although it is early days, the current attrition rate for their operators, many of whom are refugees, is a resounding zero percent.

The two 16GB Bak Boards (one WiFi and one 3G model) both run on the Android OS. The tablets have front- and rear-facing cameras with an HD image option (of particular use to Skype users and Instagram addicts), audio and video recording capabilities, and a color screen that renders photos, movies, and books in crisp, vibrant detail. Both devices come pre-loaded with a slew of apps (including Angry Birds, Adobe Reader, and FM Radio) and others are easily added via Google Play.

The Baks are passionate about education (providing tablets to schools in several African countries) and adamant about the fact that they “make tools, not gadgets.” And the tools that Bak USA are making here in Buffalo can be used in classrooms, hospitals, and any number of business enterprises that can also be used to produce books, films, albums, and apps by writers, producers, musicians, and developers in Western New York.

Check out the new video for the 3G version (shot on location at Canalside, on Hoyt Lake, and in Delaware Park, among others). The firm is currently running multiple Buffalo-centric promotions. Check their Facebook page and Twitter feed for details, deadlines, and promo codes.

Michael Allen Potter is a freelance book editor who specializes in digital distribution.