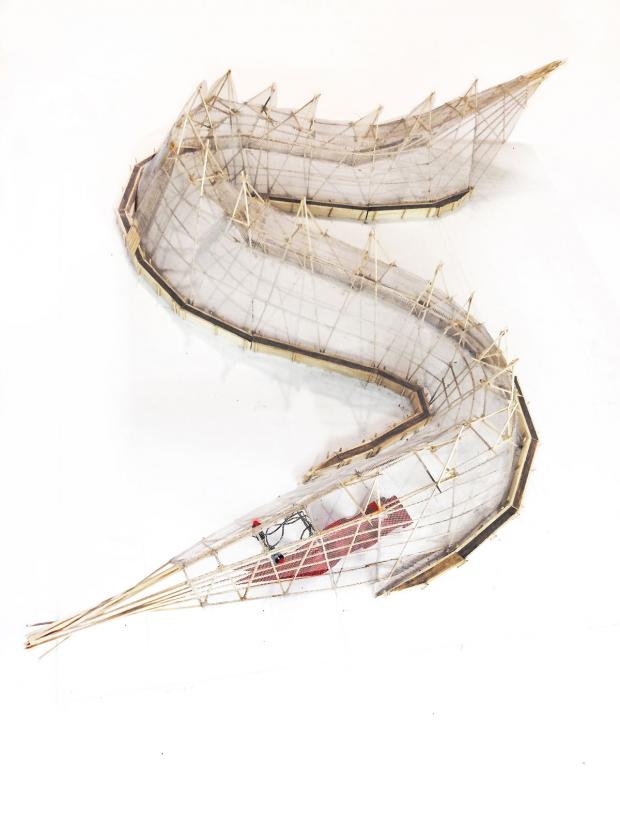 Artist Dan Galas’s current project is a 100-foot-long functional sculpture dragon. To function as a Burmese gourd tunnel, an arbor-like structure—but in this case in the shape of a dragon—for growing gourds and other types of vegetables and fruits, hanging gardens fashion. To be situated on part of a large plot of open land—several contiguous city lots—on the East Side, on which refugee assistance organization Journey’s End now operates a community garden.

The idea for the project—embryo of the idea—originated from Artfarms, an organization all about “integrating functional art with community agriculture.” Artfarms has several art and gardening projects currently underway in Buffalo on the East Side. The only one with its art component presently installed is on Michigan Avenue, the block between Riley and Laurel streets. A bizarrely beautiful meandering fluid form picnic tables complex.

Artfarms broached the functional sculpture idea to Buffalo Arts Studio—some kind of a sculptural project with an agricultural aspect—it wasn’t a Burmese gourd tunnel yet, nor certainly a dragon—to see if any artist there was interested in pursuing it. Galas was, and came up with some preliminary ideas for a “grow project.” And talked with Journey’s End, with offices down the corridor from BAS in the Tri-Main Building, about locating it on their garden plot on Brewster Street, between Fillmore Avenue and Halbert Street, a few blocks from the Tri-Main building. Journey’s End was amenable.

At which point, Galas thought, since this was going to be a refugee-oriented project, it would be good to get some actual refugee input into the project. Partly for which reason, he volunteered to teach an art class at Journey’s End. Some drawing and some basic sculpture with clay. The student makeup of the class was some Bhutanese, some Burmese, and some Congolese.

“We talked a lot about their various homelands,” Galas said, “and in their art exercises, they did a lot of drawing and modeling of familiar images and features of their homelands. One of the Bhutanese did a clay model of this huge snake-like creature. I asked him about it, and it turned out it was a dragon, a key figure in Bhutanese origin mythology—there’s a dragon on the Bhutanese flag. And one of the Burmese drew this strange architectural item, and I asked about it, and it turned out it was a gourd tunnel, a regular method for growing vegetables in that country. That’s how we got to the dragon gourd tunnel idea.”

Another thing Galas learned about in the interaction with the art class students was bamboo. “A traditional building material the three cultures have in common,” he said. “The Congolese build bridges with it.” So it was decided to use bamboo as the main structural material for the dragon. An exceedingly strong and deterioration-resistant Vietnamese type of bamboo, called Tam Vong, alternately referred to as “iron bamboo.”

(Galas said he’s been practicing building with bamboo, and recently constructed a backyard fort for his twin five-year-olds. “They love it,” he said.)

The 100-foot measurement is from the cantilever projection dragon nose to the tip of the tail—including snaky undulations—and the height varies—undulations there too—from about 12 feet to 18 feet. In addition to the bamboo basic structure, and some still to be determined sort of screening infill within the bamboo network interstices, there’s a 24-foot-long red tongue—undulant again—in steel, and one electrical component, flashing led lights dragon eyes.

Galas said he hopes to see the dragon sculpture completed this summer, but the process is not uncomplicated. The next step is to present to the city Planning Board. And there are many groups and individuals involved in the work. In addition to Galas, BAS, Artfarms, and Journey’s End, the Studio T3 engineering firm is assisting with construction planning and permitting, and Rigidized Metals Corporation is fabricating the dragon tongue and anchor elements securing and supporting the bamboo structural poles.

The other current Artfarms projects—in addition to the dragon sculpture and the community garden and artwork on Michigan Avenue—are a community garden across Best Street from City Honors School, tended by City Honors students, and another on Wilson Street, off Broadway, a block in, toward downtown, from Broadway and Fillmore.

And when you stop by to see the dragon sculpture—under construction or upon completion hopefully this summer, don’t miss checking out the same artist’s mural paintings of a dozen or so close-by architectural landmarks—slightly askew transmogrified—a block or so away on an industrial building at the corner of Jewett Avenue and Halbert Street (behind the Tri-Main building).