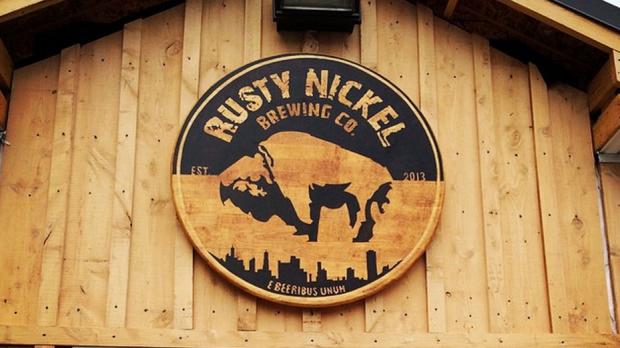 The revitalization of the beer brewing industry in Buffalo has taken various forms in the last few years. Some of the new breweries that have popped up have been started by individuals with years of experience in the commercial brewing industry. Others have been started by talented homebrewers and craft beer enthusiasts who wanted to take their passion for great beer to the next level. Rusty Nickel Brewing Company (RNBC) in West Seneca is a brewery that falls into the latter category. Founded by a team of three that features an award-winning homebrewer and passionate craft beer enthusiasts, RNBC opened its doors last month, bringing more quality beer to the scene in Western New York and another brewery to the Southtowns.

Situated behind the Ebenezer Ale House in West Seneca, RNBC is owed by Jason Havens, Scott Fiege, and Dave Johnson. Jason and Scott are natives of Greece, New York, and Dave was born in Brewster, New York. All three came to Western New York separately and got to know each other through membership in the Western New York Beer Club. After more than three years of discussion and planning, the three combined Dave’s talents in homebrewing and the passion for great beer shared by Jason and Scott to open RNBC.

In its first few weeks since opening, business has been brisk. They’ve received a great response from Western New York, especially the Town of West Seneca. The brewery also has special relationship with the Ebenezer Ale House. The owners of the Ale House encouraged the three to open their brewery in a building they owned behind their restaurant. In addition to being ardent supporters of RNBC, they also reached an agreement for the new brewery to brew an IPA made especially to be served in the locations of the Ale House. The demand was so great for this beer, it sold out in four days. The relationship between the Ebenezer Ale House and RNBC has been mutually beneficial so far, with each enjoying increased sales due to the other’s presence. Scott estimates that nearly a third of their business has been patrons of the Ebenezer Ale House stopping over before or after their meal.

The interior of building was designed and constructed by the owners of the RNBC along with an army of family and friends. It took 18 months from the time Jason, Scott, and Dave got the key to the building to where they are today. The brewery currently has a five-barrel brewing capacity with plans to expand to 10 barrels in the near future. As a farm brewery, most of the grain used by RNBC comes from New York State. RNBC plans on using as many raw materials as possible from Western New York as they become available.

When I toured RNBC, there were no beers with any significant hop content on tap. However, there were some interesting, creative beers that gave a good indication of the beers this brewery can produce. On tap on my visit were a Chai Tea Milk Stout, Not Your Grandpa’s Cream Ale, Oatmeal Cookie Ale, and Slice O’Havens Imperial Cream Ale. The milk stout was thick and rich with an understated chai tea flavor that went very well with the mocha and nutty notes of the beer. Not Your Grandpa’s Cream Ale was an exciting take on a classic style. Its genesis is the classic cream ale so popular with previous generations of Western New Yorkers. This version was stronger and more developed, while still smooth and easy to drink. The Oatmeal Cookie Ale was full of vanilla and oat notes. Don’t let that fool you—it’s a big beer at seven percent ABV. My pour of Slice O’Heavens was on nitro and was packed with orange flavor; the beer aims to resemble a creamsicle. This beer was also strong at a hefty 8.5 percent, but remained approachable.

The brewery plans not only to brew creative and unique styles of beer but on bringing mixology seen at breweries in other locations across the country to Western New York. This will allow RNBC to mix its various styles of beer together in exciting and ever-changing combinations, giving patrons new reasons to continue to stop by.

RNBC is currently open on Fridays and Saturdays but will expand hours as the weather improves. You can book private events at the brewery, and it will host live music from local bands in its beer garden when it opens as the weather warms. The grand opening is presently scheduled for the end of May.