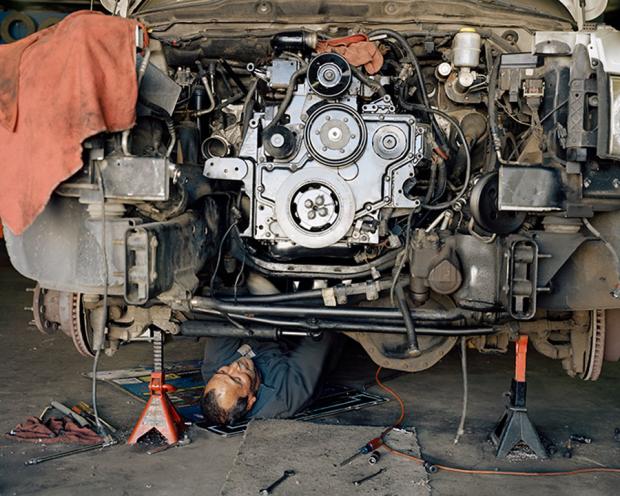 Anyone who’s ever worked will enjoy the Albright-Knox Art Gallery’s terrific current exhibit Overtime: The Art of Work. And profit from it. Figuratively, that is, not literally, though in a more real sense than the Fedex worker interviewed in a video profits from the overtime he may have to put in to complete his rounds. Which is actually more in the nature of loss—of personal time, personal life, personal dignity—than profit. (Though clear profit for the Fedex company.)

The topic of work is the topic of human dignity. When Adam bit into the apple and first incurred the necessity to work, it wasn’t about some task that had to be done. It was about the indignity of the work requirement.

Wall copy near the start of the exhibit talks about how artists have been drawn to work as subject matter especially since the rise of industrialization in the middle of the 19th century, roughly coinciding with the beginning of the art world’s modernist period. “While some artists reacted with nostalgia,” the wall copy says, “romanticizing traditional and artisanal trades, others eschewed such idealizations.” Some by straightforward documentation of the horror actuality of much industrial work, others by openly advocating for social justice for workers.

A bit of a surprise is the presence of four iconic Albright-Knox collection items we’ve seen numerous times before—some of what’s left of the collection’s older stuff after the great sell-off a few years ago—but never in an explicitly “work” context. The four pieces nicely illustrate the wall copy point about artists really only gearing up on work as a topic starting with the industrial age. They include Joshua Reynolds’s Cupid as a Link Boy (1774), Thomas LeClear’s Buffalo Newsboy (1853), Honoré Daumier’s Laundress on the Quai d’Anjou (1860), and Berthe Morisot’s Woman Sewing (1879). A link boy was a boy employed to carry a link—a kind of torch—to light travelers along a pathway at night. So the beautiful boy with wings in the painting is technically working. But given the notably phallic character of the torch he is bearing, in addition to the Cupid reference, work—labor—is not the main point of this mid-18th-century painting. Whereas, the other three items—all from the 19th century—are clearly about work, we come to see better in the context of this show.

The Fedex piece is by artist Josh Kline. In addition to the interview with the driver/deliveryman, it includes three sculptural Fedex box filled with items symbolizing the main points of the video interview: No Sick Days, No Vacation Days, and Unpaid Overtime.

Another wonderful installation is on a performance project by artist Maria Laderman Ukeles, the core element of which was to personally thank and shake hands with each one of the thousands of New York City Department of Sanitation employees for the work they do collecting trash and garbage and keeping the city (relatively) clean. Usually a thankless task, or worse. In a video, sanitation workers talk about the public near-total lack of appreciation for the task they perform, often under duress conditions, and near-pariah status they incur in performing this necessary and unpleasant job. They talk about how when they take their legitimate lunch break, people call in to the Sanitation Department and report them. Why aren’t they working?

No Vacation Days by Josh Kline.

Another installation is on worker health and safety. It is by artist Fred Lonidier and features gritty reality flavor posters with forthright to the point of brutal photo documentation of the debilitating effects of performance of typical blue-collar tasks eight hours a day, over an extended period. The display items are selected from the artist’s project called Health and Safety Game. Game in the frequent cynical sense of that word. A specifically management game, in which the workers are pawns.

Lots more. And given so much, it seems churlish to mention what’s not given. But there’s nothing about how the computer and cell phone have transformed the eight-hour day into a twenty-four-hour work day, the latest mode of work world tyranny. And little or nothing on what the introductory wall copy calls “romanticizing traditional and artisanal trades.” The William Morris opposition impulse to industrialism, adhering to production modes that could not compete with industrialism—at least on industrialism’s terms—and so seemed to fall by the wayside, but did not die but live on. Now we have artisanal beer. Whereas the industrial mode is unsustainable as well as inhuman, as this exhibit clearly demonstrates.

Albright-Knox Curator Cathleen Chaffee put the exhibit together. It is supported, in part, by the Western New York Area Labor Federation. It continues through May 17.