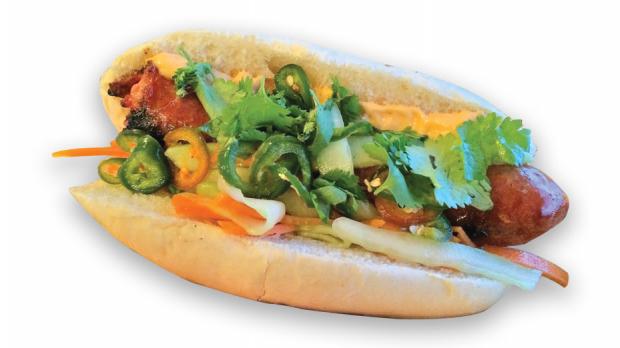 On Thursday, April 9, the Buffalo Bisons will take to Coca-Cola Field to kick off the 2015 season.

This comes as welcome news to people who relish the sights and sounds of America’s favorite pastime and look forward to attending games with loved ones in tow. For me, its significance lies in its gustatory relevance. And with the first pitch (to be thrown this year by Rex Ryan, FYI), ballpark food season will be in full swing.

The definition of ballpark food is certainly open to debate. This year, the Bisons announced that pizza logs, pulled pork sandwiches, and Oreo churros will be among the new concessions offered. But said novelties are just that—novel. For purists, nothing beats the classics: peanuts, popcorn, nachos, and, of course, hot dogs.

Few foods celebrate warm weather like encased meat in a bun. There is something about the smell of the grill, the snap of the casing, and the taste of char taken to the precipice of disaster that invokes memories of time spent outdoors, youthful carelessness, and family. Unfortunately, as a person with an aversion to boredom and a healthy fear of errant foul balls, aggressive gulls, and having my face plastered on the Jumbotron, I don’t get to games as much as a good Buffalonian probably should. Fortunately, downtown now offers alternative venues for getting a quick sausage fix.

The most obvious stop—Dog é Style—is within walking distance of Coca-Cola Field. Its tongue-in-cheek name may have raised a few eyebrows initially, but I was more offended by the formalwear-clad cartoon hot dog logo. It looks like a lost character from the mid-century “Let’s All Go to the Lobby” movie theater concession ad. It’s incongruous with the design and feel of the space.

Questionable marketing decisions aside, Dog é Style offers unique variations on the charbroiled link we have all been conditioned to love. Plain-Jane Wardynskis are available, but the restaurant’s claim to fame is its custom-blend sausages and outside-the-box toppings, ranging from an all-beef on weck dog, complete with horseradish mayo, to a link topped with foie gras, mushrooms, and aioli.

On my visit, the Nola—a classic pork frank with ham, provolone, olive salad, and fried oysters—was merely fine. The dog itself was barely charred, which made it practically indistinguishable in taste and texture from the thick slice of ham wrapped around it, and the oysters became flabby and less appealing the longer the dog sat. But the olive salad was a bright and briny counterpoint to the fattiness of the other toppings, and had I finished my dog with haste, the oysters likely would have maintained their integrity.

Other items were hit and miss. The domestic feta, mild pepperoncini, out-of-season tomatoes, and canned olives that topped the Greek lamb dog weren’t assertive enough flavor-wise to balance the musk and gaminess of the sausage. But the pickled vegetable, cilantro, and jalapeno-crowned bahn mi dog, inspired by Vietnamese sandwiches of the same name, was a table favorite. As were the fresh-cut fries. My dining companion and I happily lingered in our sun-drenched seats until we polished off the entire order.

The lamb link at cocktail and sausage den Ballyhoo was better on my visit than Dog é Style’s version. The ground shank was more grassy than gamey, and the sausage’s curry seasoning and raita curtailed any potentially off-putting notes. The ground beef-based Steakhouse sausage topped with creamed spinach was perfectly fine and homey in the sense that it tasted like the cube steaks I ate as a child. It was comforting and familiar, if not exciting—a dish I could imagine my meat-and-potatoes grandmother eating with gusto.

The potato chips that came with the sausages left me longing for another helping of Dog é Style’s fries, and I wished that the cabbage in a side order of slaw had been more thinly sliced to allow it to properly break down under the salt and acidity of the dressing. The standout side was an outrageously creamy helping of stovetop macaroni and cheese, enlivened with a healthy dose of cayenne. It’s also worth mentioning that my cocktail—a Last Word—was perfectly executed. But that’s another article.

Both venues offered mixed-bag but overall pleasant experiences in their own right, but neither proved a perfect substitute for a ballpark frank. For that, I might actually have to go to a game. But I’ll probably just wait for the Ted’s rumored to be opening on Chippewa.