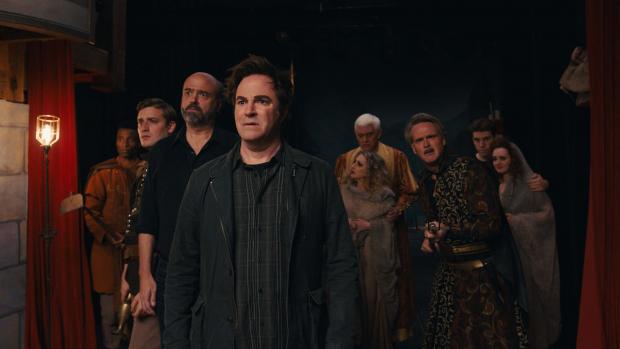 Theater people are almost proudly superstitious, and about no play more so than Macbeth. That’s what makes a summer stock production of “the Scottish play” (for those who dare not say its name) the perfect vehicle for this satire of show folk.

The rundown Riverside Resort and Theater in rural Massachusetts has probably seen better days, which is more than can be said for the rag-tag troupe that arrives there to perform Shakespeare’s enduring tragedy. That the group exists at all is thanks to the deep pockets of Alex (Cary Elwes), who thinks that he can act just because he spent 17 years starring in a popular soap opera.

Much better suited for the leading role is Thomas (Tom Riley), a talented young stage actor whose poor behavior burnt a lot of Broadway bridges. Sharing this opinion is his lover Liz Beth (Shannyn Sossamon), the production’s Lady Macbeth, and also Alex’s wife. Commiserating their poor luck on the theater’s otherwise abandoned stage one evening, Thomas arrogantly does what actors are warned never to do: he says—shouts—the name “Macbeth” aloud, over and over.

The result, while not as grisly as saying “Candyman” in that horror series, is nonetheless not good.

The best parts of Ghost Light (cowritten by Geoffrey Taylor and director John Stimpson find clever ways to interweave Shakespeare’s plot with the trajectory of the film’s characters. (You don’t need to be more than passingly familiar with Macbeth to follow what’s happening here: recalling that Lady Macbeth in the play hallucinates bloodstains on her hands that she can’t wash of will suffice.)

Up to the challenges of the script is a first rate cast that also includes Roger Bart as the troupe’s director, who nearly steals the film despite having the least to do, and the treasured Carol Kane, who absolutely steals her scenes as a dotty grande dame cast in what she believes is the play’s most important part—the third witch.

In the end, it’s a bit of a disappointment that Ghost Light doesn’t wholly deliver on its promise. Too many characters in the ensemble cast are introduced only to fade out of the plot. And the nature of the supernatural aspect is too ambiguous, at least for this reviewer’s taste. Still, the story is pleasingly unpredictable and the players never less than fun to watch.