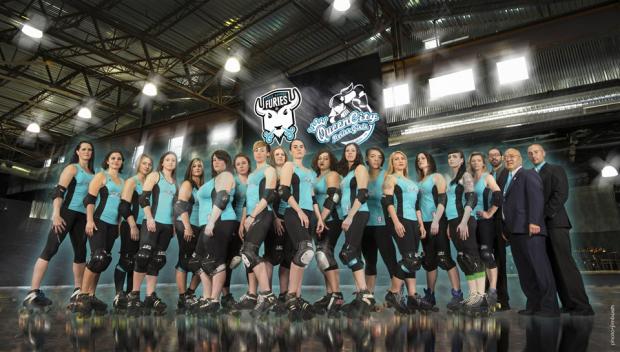 Editor’s note: We are pleased to add Dylan Powell’s coverage of Buffalo’s expanding and colorful roller derby community to dailypublic.com.

Buffalo’s Lake Effect Furies turned their best month in club history into a 14-spot ranking surge, shooting up the Women’s Flat Track Derby Association (WFTDA) rankings from 47th to 33rd in the span of just a month. The move places the team back under the Division 1 playoff cut off of the top 40 teams and also positions them well to continue to climb with seven teams ahead of them by just 30 points in their scoring averages. The jump represents the team’s largest ever rankings jump, surpassing their 13-spot jump in October 2014.

Buffalo, this means your women’s flat track roller derby team is currently ranked the 33rd best in the world out of 283 WFTDA leagues. They are three spots shy of their highest ranking ever (30), however, with the increased amount of leagues and their level of play bouncing back from a tough playoff appearance, this is cause to celebrate.

The rankings are an average of your WFTDA score in your games over the last calendar year. That score is calculated based on the percentage of total points you score in game, to the power of three, times the weight of the opposing team. Since even great scores are averaged out over your previous 12 months, massive jumps like this are incredibly hard and infrequent.

Furies Coach Guy O. Tine is impressed with his team’s effort so far this season, “We’ve gotten off to a good start to our season by keeping our foot on the gas pedal throughout our first three sanctioned games. We feel pretty good after the March results because we’ve put ourselves right back into contention for Division 1 playoffs again.  There are still 3 months before playoff invites go out and we have lots more work to do, but this has been a strong beginning of the year for us.”

The Furies built this momentum by crushing familiar rivals Roc City, Tri-City, and Toronto in March with scores of 406-52, 209-71 and 257-96. For perspective, the Furies only beat Roc by 108 points in early 2015, lost to Tri City last year by 12 and beat Toronto by just three points to kick off their first ever Division 1 playoff appearance last October. In this month’s rankings, while the Furies surged, Roc City dropped four spots to 80, Tri City gained four spots but decreased their scoring average, and Toronto dropped 12 spots to 54th. The Furies are leaving a path of destruction in their wake.

The Furies scoring average (370.85) would have placed them in 29th but they were leap-frogged by Naptown, Columbia, Helsinki and Nashville. Naptown and Columbia rolling off of lopsided wins against Demolition who are free falling in the rankings, Helsinki jumping off the strength of their tournament play in March and Nashville getting a big jump without even playing in March but having last year’s god-awful March scores coming off their books.

Furies co-captain Librawlian is happy with the results so far this year but is still focused on the work they still need to do, “Last year’s playoffs were an eye-opening experience; it helped us to focus our efforts and set an even clearer direction for this season. We have grown tremendously since last October. While we have seen some early success with the hard work we have been putting in, we still have room for growth in the months ahead leading up to playoffs. At this point, we have laid the foundation for our season, but every workout, practice, and game shapes the rest of our season.”

The Furies return to the track on April 23rd to face in state rivals the Ithaca Sufferjets who are ranked 77th. Tickets are available at qcrg.net/tickets