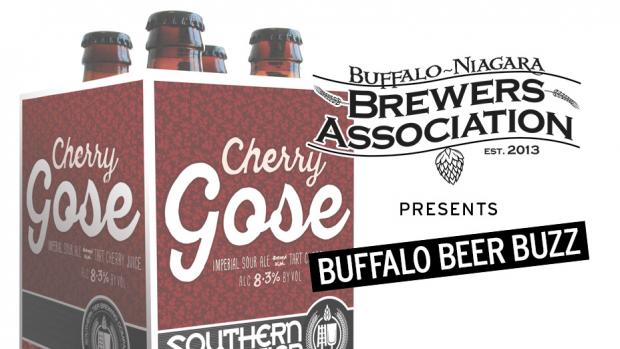 Your weekly rundown from the Buffalo Niagara Brewers Association on what’s happening locally in the beer scene.

Southern Tier Brewing Company are welcoming a new addition to their sour beer family as they gear up for the release of Cherry Gose, an 8.3% imperial sour ale brewed with tart cherry juice locally sourced from a grower in Niagara County. The end result is a beer that pours a striking shade of red with a bright lactic and big cherry nose. Sweet, tart cherries and coriander follow, helping to balance the beer’s natural acidity, and a salty finish rounds things out. Look for this beer in four packs of 12-ounce bottles soon.

Community Beer Works are banking on their future and plan to do so in a big way by investing over $1 million into upgrading their current digs at 15 Lafayette Avenue to a larger facility at the corner of Seventh and Jersey streets, on Buffalo’s lower West Side. CBW president Ethan Cox says that the nano-brewery’s production could increase to as much as 3,500 barrels annually with the potential to grow to 15,000 barrels of yearly output. And as for CBW’s current home? Cox adds that the facility will be used for producing custom batches of craft beers along with some of its sour and barrel beers.

At 12pm on Saturday, April 9, Big Ditch Brewing will release Bidwell Wild: WNY Wild Ale, the culmination of a two-year beer experiment. For the beer, Big Ditch used five to six pounds of fruit (peaches, blueberries, blackberries, gooseberries, raspberries, pears, nectarines, plums, grapes) from farmers at the Elmwood-Bidwell Famer’s Market as a source of wild yeast. After two years, Bidwell Wild was aged in fermenters for six months and bottle conditioned for two more. A very limited amount of bottles will sell for $16 and approximately 150 one-ounce pours of Bidwell Wild: WNY Wild Ale will also be available.