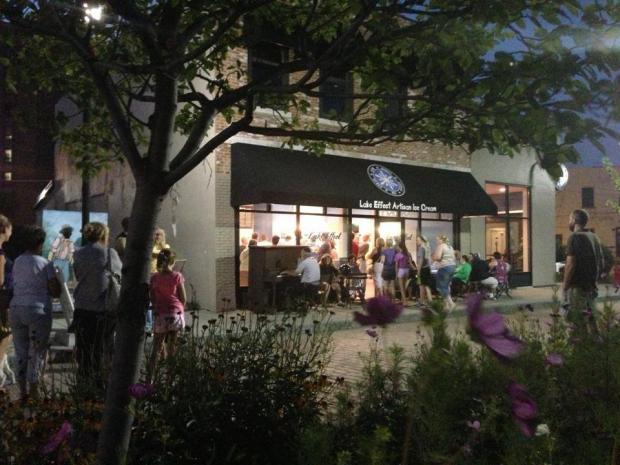 Despite the longer days and (slowly) climbing temperatures, Lake Effect is in the forecast. But this time, Western New Yorkers aren’t complaining.

In a sure sign of spring, Lockport’s Lake Effect Artisan Ice Cream will open for the season on Friday April 10. The announcement, which came via social media last week, was made to the rejoicing of the company’s loyal and surely winter-weathered fans, many of whom look forward to the opportunity to jump on the 990 for a taste of the company’s unique in-shop offerings, which include a rotating menu of ice cream flavors, freezie pops, cookie sandwiches, and over-the-top milkshakes and sundaes.

Lake Effect co-owners Jason Wulf and Erik Bernardi were busy planning and experimenting in the offseason, and they are excited to reveal the results of their labor to patrons as the season unfolds. A locally-driven sundae featuring Public Espresso ice cream, Paula’s Doughnuts glazed fry cake pieces, and doughnut glaze and espresso toppings will be among the new items. Lake Effect will also begin selling ice cream cakes, the first iteration of which will likewise showcase Paula’s Doughnuts.

Not everything will be new, however. Momofuku-inspired marshmallow and cornflake crunch cookies will continue to flank Salty Caramel in one of Lake Effect’s more popular takes on the ice cream sandwich. Niagara County-brewed Steampunk Cider will once again grace the menu in the form of a freezie pop. And fan-favorite sherbet Gin and Juice, featuring London dry, orange, and grapefruit, will make a reappearance, as will a retooled version of Lake Effect’s Blood Orange and Angostura Bitters Sherbet, which will be rebranded this year as Graycliff Sunset.

As if spirits-infused frozen desserts aren’t exciting enough, Lake Effect will soon be mobile. Wulf and Bernardi plan to put a decked out three-wheeled Cushman truckster on the road by mid-summer.

”It’s basically a freezer on wheels,” Wulf chuckled when asked about the venture.

The truckster, which will play traditional ice cream truck music covered by local bands, will be confined to Lockport initially, but the duo hopes, in time, to build an entire fleet of “odd little trucks” to serve a wider geographical area. Speaking of which, Lake Effect will also move its production facility to a 7,000-square-foot building near its flagship store. The move will eventually allow the company, which produces its products exclusively in small batches, to offer online ordering and to open new locations.

So while we (hopefully) won’t have any more snow this season, there’s a strong chance Western New York will be seeing more of Lake Effect.