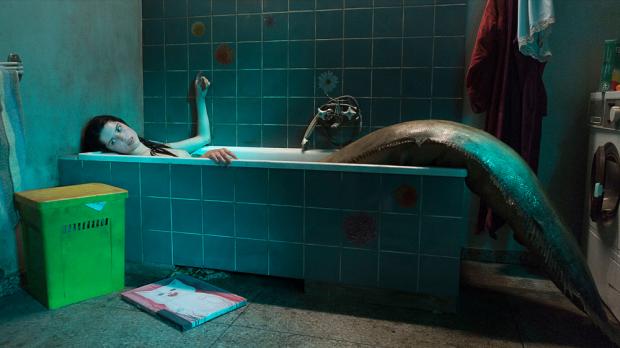 Before their Disney-fication, fairy tales were often horror stories filled with violence and gore, and aimed at entertaining adults as much as terrifying children. The Little Mermaid, the Beast, the Snow Queen, and even Jiminy Cricket perished in manners not exactly conducive to theme-park attractions and merchandising aimed at young girls. The Lure, opening Friday at the Screening Room, is the first musical about man-eating stripper mermaids. At its heart, it is also a more faithful adaptation of Hans Christen Andersen’s story “The Little Mermaid” than we’ve seen before.

Srebrina and Zlota are two mermaid sisters who come ashore in Warsaw before a planned trip to the United States (at least according to the English subtitles). They find a temporary home, and employment, in a cabaret where the performers sing their favorite American songs. Perhaps this emulation of Western pop culture is why the sisters choose Silver and Gold as their stage names. The ladies quickly win over the club owner and his patrons with their willingness to bare all—in this case, their mermaid tails, which they unfurl in a giant champagne glass. Like Daryl Hannah in Splash, Silver falls in love with a human male, while Gold sates her appetite by devouring the usual horny victims. Much of this is played for whimsy until Silver sacrifices her tail in the name of true love, and the resulting surgery unfolds like something out of The Human Centipede. Like The Rocky Horror Picture Show and Phantom of the Paradise before it, The Lure gains weight in its last act, and the allusions to Anderson’s fairy tale become literal when we learn Silver will turn into sea foam if the subject of her affection marries someone else.

The Lure had a successful film festival run and screened at Sundance, which should tell you this isn’t your typical horror or fish tale. First-time director Agnieszka Smoczynska’s film alternates between the quirky, alien tones of a foreign indie comedy and a more somber exploration of strangers in a strange land. The early musical numbers—the mermaids’ enticing siren calls from the ocean to the Warsaw men folk, and the performances in the club—generally operate in a narrative context, but eventually give way to full blown musical numbers that lend the film a unique exuberance. In recent years the Screening Room has played art house horror films like It Follows and The Babadook, and The Lure should appeal to moviegoers seeking something different than what they’ll find in the local multiplexes, not to mention an even rarer fish these days: a foreign language film.