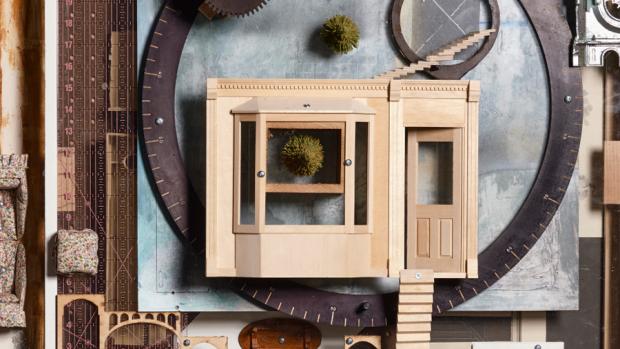 All of which is to the point. The mess and similarity also. As microcosm and macrocosm. And mess in a good way. As flux, flow, living stream. What may look like chaos up close. Involving demolition and preservation, with a bias toward preservaton. Excavation and aggregation. Archaeology in essence.

The Fargo House looks like a demolition site in process. In fact, it was a demolition site. Slated for demolition, that is, until Maher acquired the property and performed—and continues to perform—piecemeal and partial demolition, and radical re-do. Cutting away a floor or ceiling segment here, connecting previously unconnected spaces up and down. Detaching a non-load-bearing wall there, hanging it on a roller track, for utilization or not as occasion or whim requires. Copious uncovered wall beams and floor joists. You watch your step. The house has an overall work in progress unfinished look. And voluminous extraneous items. Old building materials, old mechanisms, old tools, old toys. Remnants, fragments. Retrieved in the course of the site demolition effort, and accumulated from other sites and venues. Natural aggregation sites, Maher calls them. Second-hand items shops, re-use depots, the street. (Maher does seem to have a weakness in this regard. In regard to accumulation.)

City House Models—currently on view at Eleven Twenty Projects gallery—partake of the look—but even more the feel—of Fargo House. A few dozen three-dimensional wall hangings and free-standing collage conglomerates of construction-related or construction-reminiscent materials. Demolition-derived remnants and fragments again, and copious doll house miniature items. Finicky dainty little windows and doors and porch railings and the like, or in one work several of what might once have been Christmas nativity scene crèche structures. A few rough work timber posts and beams and simple thatch or bare board roofs. Plus maps and plans and gears and grids and gadgets.

City of the Oscillator, by Dennis Maher

Each wall or free-standing sculptural work ostensibly with its own theme, ostensibly indicated by the work title. But themes often hard to decipher, and titles often not much help, amid the blizzard of old materials in turmoil arrangements. Materials without forms, or finished and done with their old forms, searching for new forms.

So what is the larger purpose and meaning—if any—of this collage miscellany of architecture association scraps and tatters? A third term—implied, but no less important—element of the microcosm/macrocosm series is the city. Seen as a continuous makeover project. Continuous process of demolition and preservation, reuse and redo.

Toward a new architectural model—in the sense of paradigm—versus old model of build new and build big, usually for big money interests, and attendant ecological injury and insult. (Architecture for institutions more than people, and often at the direct expense of denizen populations that are often mainly affected by such projects in being forced out of their middle and lower class areas to make way for them.)

Maher has written about the new architectural model in language ranging from Marxist (“the consolidations of wealth into the hands of the very few, and slow and steady disappearance of the middle class…the tremendous divide that exists between social everyday realities and the warm and cozy provisions of architecture’s security blanket”) to mystical (how in rebuilding with site demolition materials “the stored energy of matter is released, upsetting the apparent stability of the house’s walls, floors, and ceilings”). Nor does he claim his new model—vision of a new model—is complete and well-formulated at the moment. But in process of formulation. Like the Fargo House, and City House Models, and city.

A new model. But how to achieve it? In part through another project Maher has going, in partnership with the Albright-Knox, called SACRA (for Society For the Advancement of Construction-Related Arts). A training program in the former Immaculate Conception Church, 150 Edward Street at Elmwood, to teach carpentry and design elements to men and women wanting work and work skills, instructed by area tradespeople and artists and artisans and contractors.

A crew of about six workers is working there now, erecting a sort of medieval castle complex with dungeon-like tower amid the pillars and arches of the gothic old church building. Come fall, twenty trainees are expected to be enrolled in the program, in coordination with the Erie County Social Services Department.