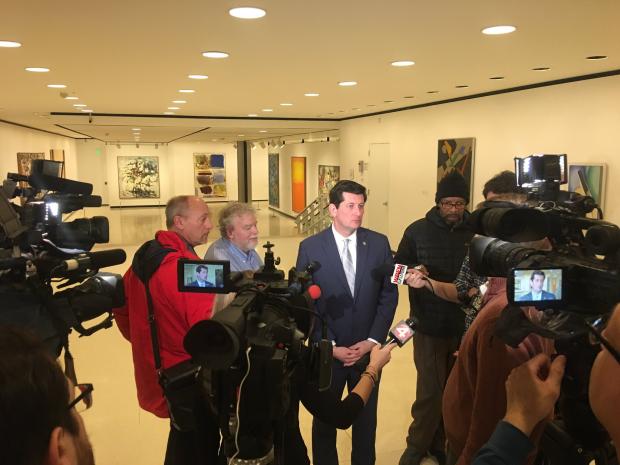 It should not come as a surprise to anyone that in the era of Donald J. Trump, millionaire, American politics have become incredibly dumb and unconscionably threatening. There exists in the world zero excuse — none — to threaten violence or bodily harm on one’s political opponent. I don’t care if you’re a Democrat, Republican, or a member of some corrupt or washed-up marionette fusion party, under no circumstances is it ok to threaten someone over a political point of view.

We come to learn this week that County Executive Mark Poloncarz has accepted a security detail from the Sheriff’s office due to threats he has recently received. The Buffalo News reports:

On the Friday before St. Patrick’s Day, a suspicious package arrived at his office addressed to him as “personal and confidential.” It had been hand-delivered to his office and had no return address. Nothing inside turned out to be dangerous, but the incident put building security on alert, he said.

Fair enough. I understand that county resources are limited, and I have no doubt that Poloncarz accepted the security detail reluctantly at someone else’s recommendation. In fact, he tells the News exactly that.

He accepted police protection upon the recommendation of Buffalo police, Erie County Central Police Services and the Sheriff’s Office, he said. That includes special transportation measures and two sheriff’s deputies who travel with him to his scheduled events, among other security measures that he declined to publicly discuss.

He said he does not know how long he will continue to have the security. He hopes it is temporary.

“It’s completely changed how I have to go about my work routine and daily life,” Poloncarz said. “I’m not thrilled with it.”

Erie County Undersheriff Mark Wipperman said he could not elaborate on the details of the open investigation but confirmed the additional protection was recommended.

“Based off the recent threats made against the county executive, we believed a security detail was needed,” Wipperman said.

Also fair. I think that if an elected official received a credible threat of harm, he or she ought to implement whatever reasonable security measures law enforcement might recommend. Obviously he doesn’t need an armored car or a full motorcade, but being accompanied by deputies on the recommendation of the police seems reasonable for an elected official who by no means signed up to get threatened by Facebook trolls whose behavior escalates into potential assassin territory.

In that Buffalo News article, however, one prominent Republican and one member of the washed-up, marionette “Independence” fusion Party attempted to make political hay out of the protection of a fellow elected official.

“If there is a credible threat to him and he is in need of security, then that’s fine, but I have questions,” said [County Executive candidate Lynne] Dixon, adding that she wants an update on the status of the investigation.

Ms. Dixon should have stopped at “fine.” Everything after that is irresponsible and macabre.

Wipperman said the deputies, detectives and supervisors who are trained in dignitary and executive protection work come from different parts of the Sheriff’s Office.

“They are assigned on a rotating basis so that none of our normal operations and investigations are hampered,” he said.

On what basis is Lynne Dixon, a county legislator, in any position to demand an “update on the status of” a police investigation that does not affect her? Never fear, dear reader, because Dixon’s ghoulishness is dwarfed by Comptroller Stefan Mychajliw’s colossal grotesqueness.

“I’m sure there’s a significant cost involved in removing these highly trained officers from their specific detail to protect the county executive like he’s the president,” he said.

Think on that for a second. Mychajliw is quite literally putting a price on Poloncarz’s head. This is professional-grade concern-trolling. I mean, is there a “cost” threshold that Mychajliw or Dixon can stomach to prevent a political rival, his loved-ones, and his staff from being harmed? If so, then why isn’t that being established? Why are the media dutifully transcribing these bloodthirsty sentiments without challenging them.

How much is too much, Stef? What is the most taxpayer money that can be spent to prevent the murder of the County Executive, Lynne? Somebody ask these questions.

I call upon members of the Erie County Legislature immediately to introduce a bill that delineates the maximum amount of public money that can be spent to protect an elected official against whom a credible threat of violence has been made.

From a practical standpoint, I believe that it’s smarter for Poloncarz to take security advice from professional members of law enforcement rather than from former journalists with no law enforcement experience who made names for themselves by wearing red parkas.

In February 2017, Mychajliw said he received threats from an inmate, believed to be mentally ill, who threatened to “exact revenge” against him with a gun. That led Mychajliw to apply for a concealed carry pistol permit and purchase a Glock at his own expense. The inmate has since been in and out of jail.

Poloncarz said Mychajliw should contact Central Police Services and the Sheriff’s Office if he has serious concerns.

Mychajliw said he contacted the sheriff when the issue first arose.

“I thought it would be silly to ask for 24/7 police protection,” Mychajliw said. “Our law enforcement should be used to fight crime on the streets, take drugs out of the community and fight the very serious opioid epidemic.”

Mychajliw here presumes that Poloncarz asked for police protection, and the very article in which he is quoted proves him incorrect. To put a finer point on all of this, Mychajliw amazingly does not consider the protection of elected officials from credible threats of harm to be “crime on the streets”. I’m pretty sure it is. His invocation of the “opioid epidemic” is clumsy politicization of all of this. Stefan Mychajliw’s office’s remit does not extend to telling law enforcement how to do its job.

Wednesday morning, Mychajliw appeared on WBEN and took surprisingly pointed questions from Susan Rose on all of this. He parroted the propaganda he fed to the Buffalo News’ Sandra Tan, and demanded that the Rath Building’s security footage be immediately released so as to apprehend whomever delivered the suspicious package to Poloncarz’s office.

Except there’s a problem with that. It wasn’t just the suspicious package.

Five days [after the package was delivered], an incident occurred at [Poloncarz’s] house that prompted him to call the police. He declined to elaborate, saying he doesn’t want the information to harm the investigation or encourage copycats.

Mychajliw said nothing of that, completely ignoring so as to advance his sadistic narrative that Poloncarz is a spendthrift drama queen.

Mychajliw suggested that Poloncarz do what he did — get a concealed carry permit and then cross your fingers that cosplaying Hopalong Stef is better protection against lunatic cranks than foillowing the recommendations of law enforcement. Note that in Mychajliw’s case, he says he contacted the sheriff; the article does not go into any further detail, so we are left to wonder whether the department considered the threat against Mychajliw to be as serious or credible as the ones made against Poloncarz in recent weeks. Perhaps Mychajliw’s concealed carry permit wasn’t just some cynical political ploy to pander to the SCOPE/Abolish the SAFE Act crowd and was instead a well-considered and proportional response to the threat he received; by the same reasoning, perhaps Poloncarz’s reluctant acceptance of a security detail is a proportional and reasonable reaction to the threats he received.

We are all just trying to be people in this society. If law enforcement had recommended that Mychajliw accept a security detail because some crazed leftist was making credible threats, literally no one would begrudge him that. When the security of public officials takes a back seat to cost, then the country is truly in a sorry state. If there is truly a “concern” about cost, then this could be handled quietly. The fact that it’s in the paper tells you that this is a political stunt and not a serious or credible concern at all. This is a Republican effort to make Poloncarz seem like he is taking something from taxpayers to which he is not entitled. Shame on Dixon and shame on Mychajliw.

The only appropriate response to learning of a credible threat of bodily injury against a fellow public servant is to ask “what do you need”. These Republicans would sooner see Poloncarz harmed than spend a dime on his protection.

I think the media should stop “both-sidesing” stories like this and instead probe why Mychajliw and Dixon are so eager to see harm come to Poloncarz and his family, friends, and colleages.