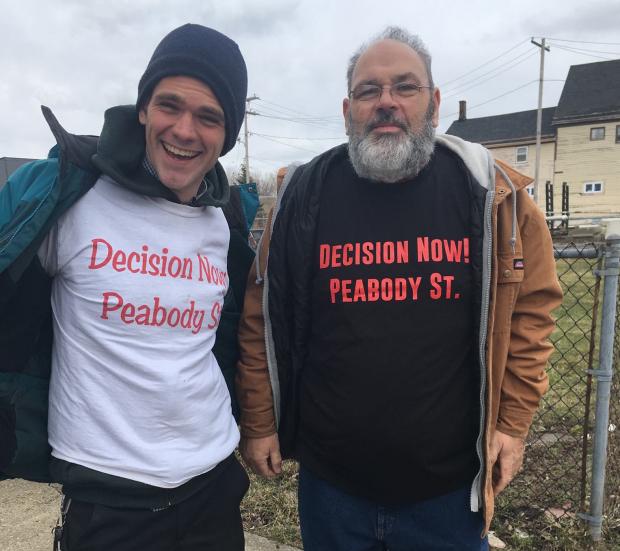 Residents on Peabody Street scored a major win for clean air in State Supreme Court on Monday.
by
The Public Staff
/ Apr. 4, 2018 12am EST

Crossroads Collective and the “State of Our City.” Policy talks can be dry affairs, and participation can be hard to come by. But neither of these factors were the case last Thursday at the Buffalo Central Library. The capacity crowd—in fact it was over capacity—heard from speaker after speaker give three minutes of their mind on housing, policing, education, and immigration issues. Progressivism is alive and well in Buffalo, you just won’t find it in many elected offices.

New York State Supreme Court Justice Deborah Chimes: For more than a decade, Peter Battaglia’s concrete-crushing operation in Buffalo’s Seneca-Babcock neighborhood has been flouting environmental regulations and governmental attempts to bring it to heel. But this Monday, Chimes issued an order forcing Battaglia Demolition on Peabody Street to cease operations, finding the company to be “a public nuisance” that lacked required permits. Chimes also ruled that Battaglia could be personally held liable for damages, for which neighbors have long been seeking redress. “It was a big win,” Brian Borncamp, a community organizer with the Clean Air Coalition of Western New York, which worked with residents in dealing with Battaglia, told our partners at Investigative Post. “We now have a mandate that he will follow the law and be held accountable for his actions.”

Buffalo Police. For the third time in just over a year, the New York State attorney general’s special investigations and prosecutions unit is investigating the death of a civilian by the conduct of Buffalo Police. Susan LoTempio of North Buffalo was struck and killed on Good Friday morning by an officer driving eastbound on Hertel Avenue en route to a service call on Starin Avenue. While this has the appearances of a tragic accident, we still don’t know why the city can’t be more transparent on this. Did the car have its lights on or off? Were the sirens on or off? What was the nature of the service call the officer was responding to? These are simple questions and that the LoTempio family deserves answers on now. They shouldn’t have to wait 10 months for the attorney general unit to release its findings.

The Buffalo News and business reporter David Robinson, whose byline appears on an April 3 front-page article that might as well have been written by public relations flacks for IBM’s downtown call center and Governor Andrew Cuomo’s Buffalo Billion program. This paper has published two pieces by Charlotte Keith of Investigative Post detailing the disappointing results of the program’s $55 million investment in bringing IBM to the region: What was touted as an investment in high-paying tech jobs has netted instead relatively low-paying, outsourced call center jobs. But Robinson’s story offers a venue for IBM executives and state economic development officials to reiterate promises already broken: The investment is called “a work in progress”; the article is littered with words like “hope,” phrases like “If that happens,” and assurances that tech support jobs are some sort of gateway to higher-paid programming and data analysis positions. It is the job of IBM and the Cuomo administration to put the best face on the Buffalo Billion investment in IBM’s local call center. It’s the job of journalists to provide balanced factual analysis of that investment, to counter spin. Charlotte Keith’s articles did that; the Buffalo News and David Robinson did not.

NFTA Chairwoman Sister Denise A. Roche. Maybe she’s confused about what she’s allowed to disclose from executive session, or what executive session really means? The Buffalo News discovered by a Freedom of Information request that Roche had approved substantial raises for the NFTA’s executive director, its chief financial officer, and its top lawyer. All three returned the raises, according to the ED Kimberley Minkel “in light of the recent New York State fiscal concerns that have been reported,” but also likely objecting to the underhanded way in which they received them. And someone, perhaps one of the three, tipped the News off to file the information request in the first place. Not a good look from the chairwoman as the NFTA struggles to secure maintenance and operational funding without a fare increase or service decrease.